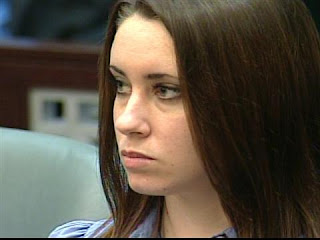 By Diana L. Chapman
Decades ago at a college party in San Diego, a woman told me how she served on a jury in a huge murder case that enthralled the entire city. The jury couldn’t reach a verdict, and the media made much ado about it.
Just as with the recent not guilty verdict in the Casey Anthony case, the public was outraged.
Like an insensitive idiot, I said: “Well, you guys blew it.”
Pain and shock flashed across her face, and tears streamed miserably down her cheeks. She slumped into a chair, doubled over and sobbing. I remember that more than anything else; I can’t even remember what the case was about.
“How can you know we ‘blew it’?” she asked. “You weren’t there. You weren’t in the courtroom day by day, minute by minute. You weren’t there to listen to both sides of the case. You didn’t hear everything that was said. How can you judge us?”
That is the same question we should ask ourselves after the stunning verdict when the jury declared Casey Anthony, a 25-year-old Florida mom, not guilty of killing her 2-year-old daughter, Caylee.
Almost immediately, the media interviewed members of the public who said a “baby killer” was going to walk free. Others wondered how someone like Anthony got off the hook.
TV host (and attorney) Nancy Grace, who consistently railed about Anthony on the air and believed she would be found guilty, called it “a miscarriage of justice,” adding that she was sick and disappointed by the decision and the jury’s failure to take copious notes.
One juror, she complained, sat and “twirled her pen.”


But again, I ask how can Nancy Grace judge the jurors’ verdict if she was not involved in the day-to-day trial, as was alternate juror Russell Hueclker, who claimed: “It was the right decision. They (the prosecution) didn’t show us how Caylee died. That was important.”
It all comes back to the question that the juror in San Diego asked me that day: How can we judge the jury when we weren’t there in the courtroom – as they were -- to conclude that the prosecution hadn’t proved guilt beyond a reasonable doubt?
Their verdict came despite hordes of horrendous circumstantial evidence, including that the 22-year-old mom failed to report Caylee’s “disappearance” for more than a month. Also that she partied hard after her daughter “went missing” and then lied repeatedly to investigators.
Profusely lying, partying and failing to report her daughter’s disappearance obviously wasn’t enough for the jury to convict her on anything but lying to investigators--which they did on four misdemeanor accounts.
No matter what we believe, we have to admit to ourselves that:
a)     We were not on the jury listening to hours and hours of testimony;
b)     The jury hears only what the prosecutors and the defense put forward; they don’t hear the intensive media broadcasts that we heard;
There likely was not enough evidence to directly link Anthony to her daughter’s death.
c)     The lesson I learned that night at the party was what we all need to learn about the Anthony case. Instead of outrage and spite toward the jury, we should be thanking them for giving up 35 days of their lives, sequestered in an Orlando hotel where they were not being able to spend time with family or friends.
Certainly, the lives of the seven women and five men on the jury will never be the same.
Caylee was discovered in the woods months after her disappearance, not far from the home of her grandparents, Cindy and George.
Prosecutors painted Casey as a party woman who failed to report Caylee’s disappearance, frequented bars afterward and had the words “ beautiful life” in Italian tattooed on her body.
Prosecutors did prove that she repeatedly lied to investigators – saying that a nanny stole her daughter, which was later disproved. There was no nanny.
Lying. That’s what the jurors found.
Defense lawyers, however, laid out that there were many other possible causes of Caylee’s death, including drowning in the grandparents’ swimming pool. Because of panic, the defense claimed, the grandfather buried the little girl, which the grandfather denies. The defense also tried to enter into testimony that the father had sexually molested Casey, which he also denies.
After Tuesday’s verdict, the jurors refused to talk to the press as they left the courtroom. And who could blame them?
For 35 days, they too have been in prison and are now facing us – the public – who dares to criticize that they were too stupid and unmindful of the facts.
But the real truth here is they are the only 12 people who knew the evidence backward and forward – and were very mindful of the facts. What they were mindful of was the lack of them.
Posted by theunderdogforkids at 9:14 PM 1 comment: Links to this post

I read all of your articles and usually find most of them entertaining and interesting.  Although I agree Janice falls short in many areas as too many career politicians do; would it be in our best interest to elect an ultraconservative, tea party candidate?  Huey is against a women's right to chose, would slash services to those most in need under his "spend less" campaign, and is as right wing as they come.  Worse than not supporting either candidate is using your blog to broadcast you are not even going to vote at all!  Listen, you are a smart and passionate person on so many issues; but on this one, you are in left field!

I agree that Janice has fallen short in serving her District in certain areas (things like parking prices in downtown San Pedro and funding for a number of programs jump to mind), but she is the lesser of two evils.  She will win and Huey could have taken the $1 million plus he will end up spending and doing a lot better things with it.  Curious why he hasn't returned your request for an interview.  Any reason you think?  You do know that Huey won by a grassroots, Christian campaign base with its own political agenda that has one of the highest voter turnout known to man.  It also helped that it rained that day.  While I respect his right to own his personal beliefs; this is not the type of candidate that will best represent and fight for programs needed in the diverse makeup of our District in Congress.

For all her faults, Janice was smart to get Winograd & Bowen running against one another to split those votes.  She may not do a lot. but at least she shows political savvy at times.  Hopefully that will be put in play in Washington although term limits really hurt us out there.

I feel it is always better to vote and exercise that right than not vote at all.  However, if you personally make that choice, I think it is best kept a private one than essentially telling hundreds of readers via your blog; "don't even bother voting".

Posted by theunderdogforkids at 9:22 AM No comments: Links to this post