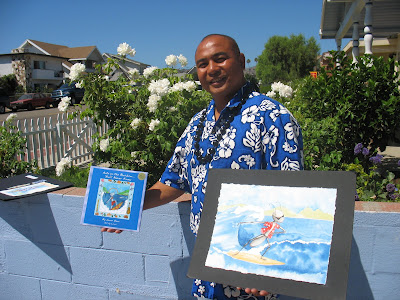 The Colors of a Rainbow, a Few Ants, a Little Kid and a Blue Stone Necklace Curves into One Big Wave of a Family Surfing Tale

One Little Book, One Wave at a Time

He wrote it because he always remembered one thing his third grade teacher would say – there’s not one student, she reminded him that could tell a tale like Jimmy. Of all her students, she said, he was the biggest, baddest kahuna of a “storyteller” -- meaning he was the best!

By the time James Daos, 38, was finished, he had a manuscript as thick as a Bible, several children’s stories – and a parade of ants that surf through his stories, each named after family members. With his children’s book, “Ants on the Rainbow…You’ll Never Know,” published and doing many Hang 5s in the sales world, James plans to soon launch his next book lining up an agreement with 260 Ralph’s stores to carry his first and second book. So far, he’s sold 3,000 books to date within the year of publishing; more of his books will be sold Sunday at the Filipino Festival at Point Fermin Park and by early October or November, he hopes to have his second book launched as he dares to ride the publishing curl.

His books can be purchased for $14.99 at his website: www.antsontherainbow.com. This Saturday, James will be book signing at Karen Carpenter Center in Long Beach from 2 p.m. to 10 p.m. and then in Ventura Sunday Sept. 16 at the Aloha Festival from 10 to 5 p.m. For further information on his book signings which will include one at Borders in RollingHills Estates this month and another in October at Williams Book Store in SanPedro, visit his website.
Currently a manager at Ralph’s Market in Redondo Beach, the San Pedro resident- surfer of Filipino descent, told his four children hundreds and hundreds of stories over the years before they fell asleep. He has three step children, Amoreena, 27, Dom, 26, Mark, 23, and his two daughters, Brooke, 15 and Hannah, 14. Since he decided to publish –he’s been overwhelmed with the scores of calls he’s received from book stores all over wanting him to do book signings – and he was invited to the UCLA Festival of Books.

But none of this – not any of it – would have happened had it not been for his daughter, Hannah, his family, his friends and the overwhelming support he received from customers who came to know him when he was a manager at Hugh’s Market on the Palos Verdes Peninsula – and later in Redondo Beach.

So many folks, he explained, wanted him to do the book that they supported the financial endeavor, sometimes with money and sometimes by just offering him a great network -such as connecting him with the artist, Lonni, who did the book’s illustration. Friends were so adamant that he do the book that they even helped him find printing and publishing companies to assist. To fund the book, he did he did car washes, worked extra hours and was shocked when he received offers of financial help from close friends and family.

As I am one who can never resist a success story and believe that's exactly where James is headed – I asked him how all the help he received from friends “such as the master net worker” who believed so much in his book that she gave him money to publish it—several tears rolled down his face.

“How does it make me feel? I feel overwhelmed,” he said, who explained that he didn’t learn until he reached his 30s that he had ADHD (Attention Deficit Hyperactivity Disorder) which likely contributed to his learning disabilities. “I feel so happy that I can (finally) share my gift of creativity and imagination with the world. I feel elated. I am just so grateful for my friends and family everyday and I thank God for them helping me got so far.”

It’s as though his true life tale holds three stories. As a father who took on three step children who he loves as his own when he married, he said, it was his kids who inspired him -- in particular his youngest, Hannah, who surfs along with her older sister, Brooke. Many of his stories sprung from his kid's adventures.

Ants came about with several events that happened with Hannah -- such as when she found a drab gray rock on the beach when she was six and asked her Dad to make it into a necklace and the second when she began singing a little ditty: “Ants on the Rainbow…You’ll Never Know.”

All his kids begged him for nighttime stories and he’d say: “What do you want tonight: a scary story, a Bible story, an animal story?”

“I can tell a story about anything and I’ll use what’s around me to become my characters,” he explained while we were dining at the Omelette & Waffle Shop. “I can tell you a story about these things right now,” he said grabbing a bottle of steak sauce – Mr. King A-1 – the creamer – the Cream Queen – a glass of water – Wally the Water – and whatever else comes to mind. And then he’ll create a story.

That’s what happened when Hannah saw her grandmother sweeping swells of ants off her porch after an afternoon rain. As she swept, a rainbow filled the sky and the ants looked as though they were “on the rainbow,” which got Hannah to start singing “ants of a rainbow.” Her dad asked what it meant. “You’ll never know,” Hannah sang. For rest of the day, she charged around singing “ants on a rainbow…you’ll never know,” which inspired his first book.

Then came the day he took his kids to the beach (they all have nicknames like DC for Double Curl) which is what he named many of the primary surfing ants in his book after –- family members.

Hannah was also responsible for the magical blue stone necklace – which started out as a gray rock she discovered on the beach at Royal Palms. She asked her Dad to turn it into a necklace. He when he was drilling the stone, it broke. Hannah started crying. James promised to fix it, painted it blue, redid the hole and told her it had special powers to fight evil. (In the book, evil comes in the form of Smasher – a killer who leads the nasty Fire Ants.)

Finally, Hannah begged him – and so did his older kids – to tell the Ants on the Rainbow story. He mixed a pot of ingredients together in the mix – the ants, the blue stone and his kids. When he finished the story, his wife raced in the room. “”Write that down,’’” she reveled.

That’s when the entire family agreed to commit writing and publishing the book, which while he’s hopeful to make money, has paid him back in ways he could never have imagined. He recalled one day at book signing, a literary professor who was about 60, came up and criticized his book, dressing it up and down – and telling the author how he could have done it better.

Just then, a little girl about six stepped to his table and yelped: “Mr. Daos, Mr. Daos. I love your book. I love the Ants on the Rainbow!”

James turned to the professor and said: “I didn’t write this book for you. I wrote it for her and kids like her.”

But the best gift he ever received was from a little girl, about 8, who raced up confidently to the author’s table, told him she loved his books about ants and then announced: “You know I’m very special. Do you know why?” Jimmy looked at her and asked: “How so?”

“Because I have M.S.,” she revealed and Jimmy could feel the bites of tears in the back of his eyes. Her Dad, who looked gruff, wore a bandanna and was covered in tattoos, stood behind his little girl and when his daughter moved away he turned to Jimmy and said with tears in his eyes: “It’s not about making money. It’s about what you’ve done for my daughter. She loves your book. I’ll tell you now; you have already done your job on Earth.”


Proceeds of Jame’s book will go to the MS Society.
Posted by theunderdogforkids at 6:09 PM 1 comment: Links to this post

Posted by theunderdogforkids at 6:07 PM No comments: Links to this post

Posted by theunderdogforkids at 6:07 PM No comments: Links to this post