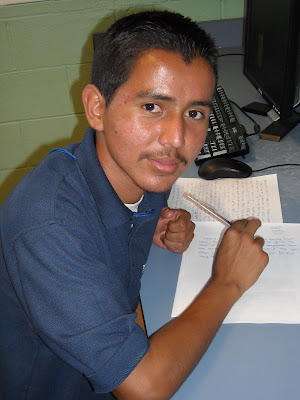 Ricardo Romero, 17, mathematician
Posted by theunderdogforkids at 10:03 AM No comments: Links to this post

Labels: When Kid's Can Write...
See Why Diana is a Drip Bag at http://wwwcitywatchla.com; And Here is a Re-post of Yesterday's When Kids Can Write Stories; Having Glitches With My Google Blog -- Apologies, apologies and apologies

Dear Readers: As usual, life often becomes a technological mess. Yesterday, I posted a story about two writer's and community events. As one reader told me, it looked like alphabet soup and even worse -- was not readable! The font colors, sizes and headlines came in a mess of all shapes and sizes. I am trying to re-post to see if this time it works.

Hopefully, I'll figure a way out of the mess as even my good friend, Lisa, Ms. Techy Queen, is having a bit of trouble fixing it.....Thanks for notifying me! -- Diana


Corner Store Sonnet Writer, Kathleen "Katie" Roarke Haase, was troubled when it came to writing. She couldn't stand boundaries and rules! So she began writing sonnets at the Corner Store; Her Favorite author -- Shakespeare

“When I was four years old, my father left my mom, sister, and me in Mexico to go to the United States. His absence affected me greatly because I had no guidance from a father when I needed him the most. Even though he would send money to us, it was nothing compared to what his presence would have meant to me.

The moment when I finally saw him again was very emotional. A new life for my family full of obstacles such as learning the English language, having no friends and also adapting to a different form of teaching.

I entered school in the first grade and by the time that I was in second grade, I had learned English. Because I was advanced mathematically, I was being sent to the fourth grade class to take math with them. From then on, my math skills continued to develop and in fourth grade I attended the Math Fair with my school.

In fifth grade, I had an opportunity to attend Johns Hopkins Center for Talented Youth and did so for five summers, which were paid by a scholarship foundation. In the classes we designed and built rockets, bridges, gear cars, cantilevers and mouse trap cars.

Opportunities like this continued to appear during middle school and high school. I was unable to attend most of them because of the high cost and for being undocumented. I felt that my dream of becoming an architect was over. Then, one day, after waiting for six years, I received legal residency.

My dream was reborn and the fact that I had maintained a high GPA gave me hope of becoming the first in my family to attend college. The perseverance that has helped me overcome these obstacles will keep me going to become an architect. I plan to accomplish this goal by attending a school that has a good architecture program such as Cal Poly San Luis Obispo or University of Notre Dame, both of which I was accepted to.

Math has been my favorite subject and my best. I use this to my advantage. I took difficult courses in Math subject such as AP Calculus and earned a 5/5 on the AP test. I also take science classes that involve the use of math greatly. For example AP Physics, where I earned an A in the first semester. My physics teacher recommended me to take the Calculus based Physics course on my own because that a class is not offered at San Pedro High School. I agreed and my physics teacher is currently helping me pass the AP test. I decided to take it because I like to be distinguished from everyone else and this is a good way to use my mathematical ability.

Apart from the educational goals, I will to attend college and play soccer there. I have played soccer for approximately 11 years of my life. I was taught to play by my father at a very young age and I have not stopped ever since. I played this sport for four years in high school. I was also a member of the Cross Country and Track team for two years. I often use running as a discipline to relieve stress.

I hope that this will inspire younger students to follow the same footsteps so that in the near future there will be many students at the same university.”
Posted by theunderdogforkids at 9:21 AM No comments: Links to this post