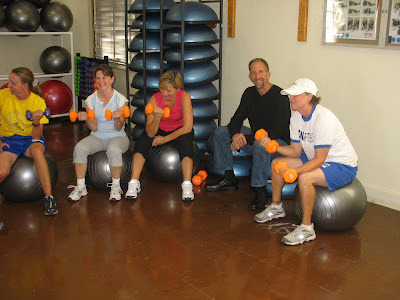 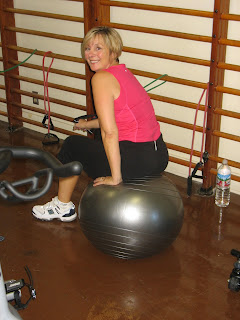 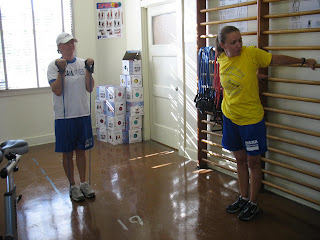 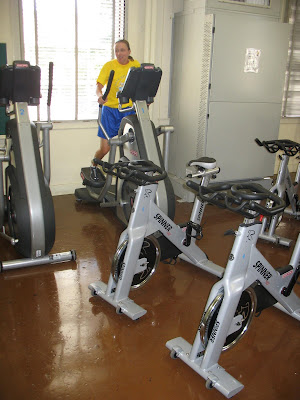 Saralyn Hannon, head of Dana Middle School physical education department wearing yellow, trains other teachers using the gift from former School Board Member Mike Lansing before he departed after serving eight years. Saying she was "floored" by the gift, the instructor plans to open its doors to students by the end of October.
DANA MIDDLE SCHOOL GETS ONE GIANT TREAT TO HELP CURB OBESITY AND GIVE STUDENTS ANOTHER SHOT AT EXERCISE BESIDES RUNNING -- A BRAND NEW FITNESS CENTER
Mike Lansing's gift left four middle schools with a trainer for teachers and $50,000 plus in physical training equipment found usually in private gyms; Some students have never seen this equipment before

Instead of leaving behind a swath of candy for Halloween, a former Los Angeles Unified School Board Member left an enormous treat for San Pedro middle school students – an intense “Disneyland” style fitness center which will open its doors in late October.
Dana Middle School’s new fitness center allows students to challenge their own skills with built-in monitoring devices on the newest training equipment and opens around Halloween, said Saralyn Hannon, head of physical education department.
The center’s pieces include 15 state-of- the-art spin bikes, three giant elypticals (like a giant looking trike that has pedals for leg thrusts and push poles for arms,) more than 20 stability balls, dozens of three to ten pound weights, scores of medicine balls, floor mats and hordes of resistance bands.
That doesn’t include the 20 bosus pieces, which are used like stepping stools, but are rounded to help promote balance.
Using a spin bike, physical education instructor Jose Morales, jumped off after ten minutes and said happily “what an awesome workout. My legs are wobbling.
“When the kids enter in here, it’s going to be like Disneyland.”
As former school board member Mike Lansing toured the facility recently and said he decided to use his remaining funds as a board member to ensure that middle school children would learn a variety of ways to exercise and open their minds to all sorts of athletics – besides running and team sports.
Funds for similar facilities were also given to Wilmington, Gompers and Markham, both in South Los Angeles. Each school received $50,000 a piece.
“Everything was being done for the high schools and the elementary schools and health is such an issue,” Mike explained. “It just made sense to invest in this. Health and academics are definitely related. If you have an overweight child or an asthmatic child or both, we are getting a twofer here to help them improve their health.”
Physical trainer Eden Paul was hired to purchase the equipment and aide the physical education teachers at all four schools to set it up. In addition, she will train the teachers in equipment usage before they start.
At Dana, it took several months to just set up the room and remove former equipment, the head of the P.E. department said. The amount of time it took to plan out the room has prevented the teachers from opening up the doors yet to students.
Once the teachers are trained and have figured out the best way to have some 60 plus students use the facility, with one teacher on hand, the students will be released to get their own workouts.
Currently, the facility has been opened up after school for teachers and staff to use, Saralyn explained.
“I am just so grateful,” the P.E. instructor revealed. “We can just do so much. It’s really different for the kids. We got the best equipment and the most for our money. I’m just so floored.”
In the past, she related that physical education was typically bypassed financially for academics and that the school is still trying to install a rock wall that it has money set aside for. Under school district policy, the installation has become so difficult with the that the campus still has yet to receive it.
With this packet, there was little concern about installation. It was more about finding the proper room and training the physical education teachers on the new-state-of the-art-equipment.
For Mike, the key for him will be coming back to see the doors unlocked for the students he left this gigantic treat for at all four of the schools.
Posted by theunderdogforkids at 9:28 AM No comments: Links to this post