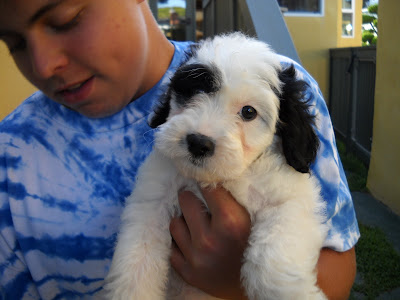 A HALF HOUR WITH BAXTER: WELCOME: STEP INTO OUR HOME AND REMEMBER WHAT IT’S LIKE TO HAVE A BUBBLY, BOUNCY, BOISTEROUS PUP

I’m running down the hallway with Baxter at my heels, digging his teeth deep into my pants leg. I try to pry our darling new puppy loose from the heel of my foot. It’s not working.

“No, Baxter! That hurts! Ouch!” Those yelps go to no avail as his baby teeth hit skin, setting off a rippling, prickling sensation.

I’ve never raised a puppy before. Can you tell? Typically, we’ve gone for adult animals. Even this time, we were planning on another veteran until our son spotted a curly, white-haired mop with a black eye patch, black ears and a skinny rod-shaped tail that looked like it was pinned on as an afterthought.

We found this 9-week-old pup at our favorite pet rescue facility--Hearts for Hounds--in an open pen with brothers, sisters and a variety of other small dogs. They waddled about barking and chirping, looking for someone to take them home.

The day was sunny but cool in the parking lot near the Long Beach Marina where we dragged along Ryan--the 16-year-old-son--to pick out a new canine for our family. Already, our clan included Buddy (a brute of a cat who, if human, would be riding a Harley with chicks, beers and tattoos) and an 8-year-old shepherd/collie mix, Boo, who believes in herding animals and people--especially me.

All those words of age and wisdom flew off the leash the moment Ryan pulled Baxter out of the pen. “No,” Mom and Dad said promptly, in unison. But Ryan wouldn’t let go of Baxter, no matter what we said. We finally convinced him to put Baxter down so we could talk as a family.

“I’ll do it,” Ryan said with all the genuine assuredness a teen-ager can muster.

“You’ll clean up the poop?”

“Take him for walks?”

The list went on. And you know how this works with teen-agers. Their guarantees come with a caveat you should never forget, but always do: They are rarely home.

At last, we agreed. Bonnie Sheehan, the founder of Hearts for Hounds, was delighted when we selected one of her eight bearded collie/miniature poodle pups – especially since we have a large backyard. The doggy deed was done. Soon, Baxter was driving home with his new family. What a surprise!

Here’s a composite of one half-hour with Baxter. All of these stories are true; the names have not been changed. I’ve read enough of Cesar Millan’s “Perfect Dog” book to know that I’m not a dog whisperer, but I’d better learn quickly.

· Baxter stands playfully in front of the water dish so Buddy the cat can’t get any. The other dog, Boo -- irritated he’s become a puppysitter -- rushes over and herds Baxter into his crate, standing guard until our feline has a chance to drink.

· Baxter races over to Boo’s dish (even though there’s food in his own bowl), grabs a few bites and flees – knowing that this action could trigger chaos. Which it does: Boo doesn’t quit a barking for 10 minutes. Manners, Baxter. Manners!

· ”Oh, Baxter, you pooped again,” I remark while cleaning up the kitchen floor. Going around the corner, I spot a giant puddle just before I step in it . Cleaning that up, I turn again and find wet footprints traipsed across the living room. Baxter apparently figured he should walk through the pool and stamp his mark on the hardwood floors. Out comes the Lysol, along with the paper towels. This happens daily.

· ”Play with me! Play with me!” Baxter seems to say, standing with his head down on his front paws, furiously wagging his tail. First he tries to convince Boo, but the old grump ignores him. Then he chases Buddy all over the house until the cat jumps onto the back of the couch. Buddy doesn’t want to play, either. Now, it’s my turn. He tugs on my pants! He leaps onto my legs until I pick him up! I can’t wait for Ryan to come home to take Baxter out and play ball. That, of course, will be a long time from now, so I realize I’ll have to stop writing and take him out myself.

· ”Give me that, Baxter! Give it to me! Thank you very much,” as I wrestle my shoe from his mouth. Slyly, he moves behind me into the closet and grabs the other shoe, running for dear life to the living room. At last I retrieve it before I realize Ryan’s socks are wound tightly in his mouth.

As I’ve been told, these puppy moments fly by quickly until the dog is an adult. Baxter, already stretched to twice his size, eats like a horse. The rescue gal thinks he won’t grow larger than 20 pounds. I’m not so sure.

Amid these exhausting baby moments, there are bright stars such as the mornings that the bickering dogs, still getting used to each other, surprise me. I awaken to find them curled up, sleeping side-by-side.

Then there are the quiet moments when Baxter, tired from playing puppy all morning, just wants to be held in my lap, which he soon won’t fit in. Or the more joyous moments when he thinks he’s in a rodeo, leaping around the living room floor like a bucking bronco, waving his toy duck.

All in all, we love our Baxman, even when he’s chewing my jacket, snapping at our toes, barking madly into Boo’s face or gloriously chasing the cat.

Perhaps the truth is this: Although we believed we adopted Baxter for Ryan, we unwittingly took him home for all of us. Because all too soon Ryan will be off to college, and we’ll be empty-nesters wishing our son would come home.

Instead, we’ll have Boo, Buddy and our youngest--the adorable but sometimes bad Bax.

Posted by theunderdogforkids at 9:43 AM No comments: Links to this post