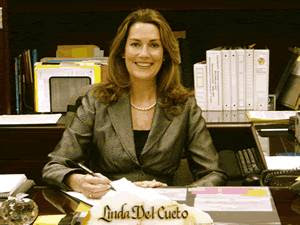 LAUSD SUPERINTENDENT CORTINES TAPS THE DISTRICT’S SOUTHERN HEAD TO MIND HIS LARGEST REGION: GONE IS THE LOCAL SCHOOL SUPERINTENDENT WHO SHEPHERDED THE BUILDING OF A CONTENTIOUS NEW HIGH SCHOOL IN SAN PEDRO – AND GUIDED SAN PEDRO AND GARDENA HIGH THROUGH A MECCA OF CRITICISMS DURING PUBLIC SCHOOL CHOICE

Linda Del Cueto, who led the way to build a new high school in San Pedro

area, stepped down from her post in June where she headed all of Los Angeles

schools in its southern region.

“I loved it here and I’m really going to miss everyone,” Del Cueto explained

during a June interview. “I worked really hard to learn all the unique and

“It’s a lateral move, but it’s one that that Superintendent Cortines asked for.”

official to manage the largest area of LAUSD which boasts 131 schools, 15 of

which are high schools.

Her new post, she said, will primarily concern an effort to make those campuses competitive enough to keep middle class residents in public schools who are racing to charters and private facilities.

During her three years of heading the southern region, which runs from northern

Pedro and encompasses Wilmington, Carson, Rancho Palos Verdes, and Lomita, Del Cueto leaves behind her a repertoire of successes – perhaps the most difficult,

finding a principal to rescue the beleaguered San Pedro High.

San Pedro High was thrust into a “public school choice option,” meaning it would

have to compete to maintain its schools against outside operators, such as

charters or non-profits. It also suffered from revolving door leadership,

When the last principal retired shortly after a brief two-year stint, Del Cueto

went out of her way to find a successful, “collaborative,” “drill-down,”

principal, one who this time lived in San Pedro, understood the community and

had a keen ability to bring players together.

So far, new principal Jeanette Stevens, who Del Cueto nabbed from another region of the district to prop up San Pedro High School -- has proven to be popular

with the community and scores of teachers within her first year. The school is

launched a new layout of small learning communities at the overcrowded school of 3,500.

Despite massive opposition from a narrow contingency of neighbors, the school

board agreed to build the 800 seat campus, which is expected to open in 2012.

Del Cueto braced the swirling controversy in which residents relentlessly

complained about massive traffic in their neighborhoods, dangerous access on

Alma Street and the destruction of the serene area that overlooks the Pacific.

with the public,” the regional superintendent said. “Just because I’m passionate

about building a new school, doesn’t mean we shouldn’t be sensitive. When the

district rolls out such large projects, it has to be done in a much more

Los Angeles Unified had owned the 28 acre site for years. The school will be an

students. The campus will be surrounded by educational resources, including the

Other areas Del Cueto said she’s proud of include:

just a tour of their next school. Now, she leaves behind plans for feeder school

teachers to meet with the faculty at the students’ next educational level. For

algebra and math, she explained, and what students learned as well as their

strength and weaknesses. In some cases, teachers will even visit students at

--Turning Gardena High, another struggling campus under the “public school

choice option,” to small learning communities, but in this case a 9th grade

conflict” and be separated from sophomores, juniors and seniors who are not

required to wear uniforms. “We felt the students really needed this as a safety

home at Los Angeles Harbor College. It currently operates in bungalows at the

college and has no access to sports facilities. She considered the project a top

priority as the school draws students from Wilmington , Carson and San Pedro.

Vladovic, who Del Cueto worked closely with, said she will be missed, but that Romero is an excellent pick for a replacement.

“Linda did a good job and cared about kids, Vladovic said. “She had a

fundamental belief that all children can learn and exemplified effective

leadership at Local District 8. We will miss her greatly but we have a new Local

Posted by theunderdogforkids at 6:43 PM 2 comments: Links to this post