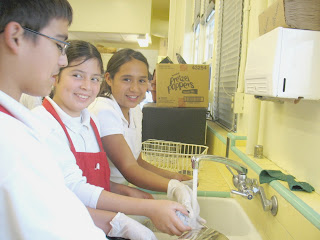 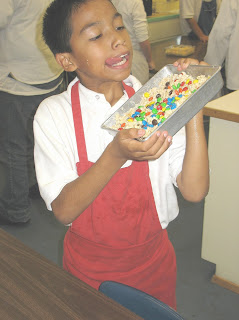 Dana Cooking Club students with the help of San Pedro High Whip up some Tasty treats... 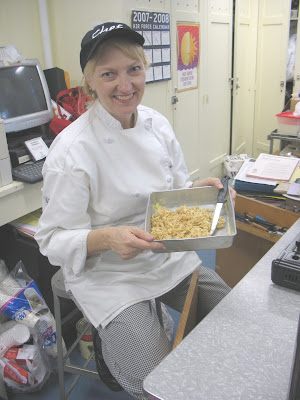 There was a frenzy of action, plenty of giggles, older kids teaching younger kids and a loud yelp from one little girl that echoed over all the rolling waves of chatter.
“I love to cook!” she exclaimed.
The spatulas were out.
The bowls and pans were ready. And students from Dana Middle School excitedly entered a marriage of the most extraordinary and blissful kind. They are learning life skills after school – how to cook – at San Pedro High School through the creative and wizard-like efforts from high school culinary teacher Sandy Wood.
An after school cooking club was established – and launched its first enthusiastic efforts this month as 20 middle school students walked to the high school and will do so nearly every Friday. The youths poured into the cooking classroom like an excited frenzy of ants around sugar and learned some special rules from their teacher.
“There are rules,” she told the group that was so intent in their class they barely moved while listening. “Knives are not swords. You have to wear an apron. Your hair has to be pulled back. And when you wash your hands, you should sing “Happy Birthday to Me” twice and use hot water.
“Got it?”
The Dana students did and in their glory, they learned to melt a ¼ cup of butter, fold in and melt three cups of baby marshmallows with it and add 3 1/2 cups of Rice Krispies.
They melted, they poured, they mixed and voila – squares and squares of Rice Krispie treats dotted with colorful M&Ms were ready to eat and/or take home.
One mother was particularly delighted with the turn out she revealed later that week..
“Chris has made Rice Krispie treats three times since the class,” his mother chortled – and added that he was experimenting with chocolate syrup on top – until the family demanded just a few plain treats.
Dana’s cooking club comes under the middle school’s pilot programming to bring after school interests to the middle school campus. So far, Dana has started a program in art (using the non-profit Art to Grow on projects), a junior police explorer club, basketball, dance movement and a swim club with future programming projected to include: song writing, tennis, sailing and foreign languages, from Spanish to Italian.
Called L.A. Network for Kids, use of the clubs are being explored to encourage students to stay off the streets, explore interests that might encourage them toward future careers and in a school of hundreds of students, to find friends in smaller-style communities.
When contacted, Sandy Wood readily agreed to run the program which will later include classes from Mona Sutton, the owner of San Pedro's the Omelette and Waffle Shop.
“Why am I doing this?” Sandy Wood said when queried. “The food service industry is one of the fastest growing segments of jobs in the U.S. We need more and more trained people because more people are eating out. There’s two parents working in families, kids are in extracurricular activities and now we have a wonderful opportunity to introduce students to cooking.”
Using the help of her top culinary high school students , Sandy had them fan out to different tables to show all the students how to make the Rice Krispie recipe and then how to clean up. The younger students enjoyed visiting both their future school and working with the older students.
“This is just so fun, because I worked with my friends,” said 13-year-old Lauren Beck, who quickly pointed out while she was washing dishes that her older brother was one of the cooking teacher’s student helpers. “I didn’t know things like ingredients and stuff.”
By the end of the class, the middle school students were washing down tables, sweeping floors, and packing up their treats to take home. Many parents are hoping this will translate into help at home – and perhaps even future culinary careers for their children.
“It’s a good thing,” the teacher said. “The students were enthusiastic and they were well behaved.”
And one of the number one lessons, she told the students was this: “Don’t be impatient. A lot about cooking is just patience.”
For more information regarding the cooking club or other Dana clubs, call Dana Middle School at (310) 241-1100 and leave a message in the main office.
Posted by theunderdogforkids at 8:58 PM No comments: Links to this post