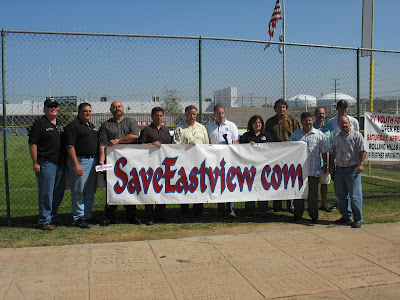 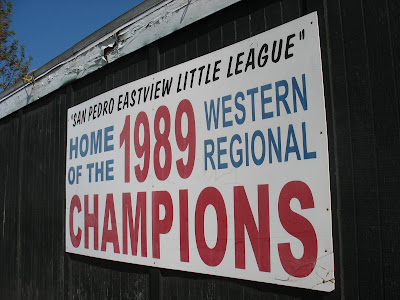 The unions showed up in force this week to support the Eastview Little League, saying that the unions “are families” and have to take care of each other – especially when it impacts long shoring children – or any children for that matter.
Mike Mitre, president of ILWU, Local 13, indicated that he wants to see stronger leadership from the council office to save the fields where some 600 children play.
“I came because the ILWU has thousands of members in San Pedro,” the president explained. “We have to come together and work out a solution. Anything to do with children is personal. I’ve had members calling me and asking for help.
“This is when you really look to your leadership,” for answers.
Other unions presidents attended from Local 63, 94 and 802. Doug Epperhart, president of the Coastal Neighborhood Council, and several of his board showed up to expressed their support as well and frustrations with the council office who will not discuss other options that have recently opened up.
Joe Gatlin, president of the Central Neighborhood council, said he too pledges his support, but was unable to attend due to a timing conflict. No one from Northwest Neighborhood Council was there although the league falls under this council’s jurisdiction.
As of July 1, league will no longer have a home as July 1 where it has operated for 40 years on the corners of North Gaffey and Capitol Drive at the former DiCarlo Bakery site. The league leased the site for $1 a year until Target purchased the property and plans to demolish the fields to make way for a new store.
Target officials have reported to other media outlets that they’ve offered $250,000 to the league to build their fields elsewhere, which league officials said they would gratefully accept if there was an elsewhere.
Union officials showed up to take photographs and endorse the league, which has been battered with fears that their kids will no longer have a place to play and have scrambled in vain to find new locations. Temporary sites offered up by Councilwoman Janice Hahn, at both Knoll Hill Park (the current home for the Peninsula Dog Park) and 22nd Street, which is under the state tidelands trust act, have triggered a storm of controversy.
Officials from the Coastal Neighborhood council have already vowed to fight any attempts to relocate Eastview at the site – after they were told they could not even develop passive parks there because of the state tidelands act, which will only allow aquatics or marine related developments at the site.
In addition, dog park members worked for more than a decade to obtain the Knoll Hill Site, which has only one entrance in and out, and also drew ugly battle lines, making San Pedro even more divisive on issues swirling around the community.
Tired of battle scars, Eastview officials have vowed to stay at the Target site, have gathered more than 7,000 signatures asking the mega store to allow them to maintain their current location and written to politicians as high up as the governor.
They’ve also send a letter to Robert J. Ulrich, the Target president, to request again to stay at its current location as was done with the Woodland Hills Little League, when the private property they were on was auctioned off. Los Angeles Councilman Dennis Zein helped them hang onto the site.
“Eastview Little League maintains a strong desire to remain at the Corner of Capitol and Gaffey Streets,” the league wrote in an official statement. “Any temporary solution to this issue – without the assurance of a permanent (site) for Eastview – exposes the League to similar problems a few years from now.”
Officials from the council office also attended, telling Eastview endorsers that the councilwoman was “not the obstacle” and that the Los Angeles Unified School District was partly to blame for this matter.
However, School Board Member Mike Lansing has opened up the idea of looking at the Cooper Continuation School site where 60 students attend that could possibly be relocated. Officials from the league were enthused by the possibility, adding that it could also have additional items such as a jogging path, tennis and basketball courts.
Despite their enthusiasm, league officials maintain that while that could be possibly become a new location, not one of the locations suggested at this point will be done in time for the kids to begin to play ball in the spring.

Posted by theunderdogforkids at 12:52 PM No comments: Links to this post