Fsh and GAme president should quit 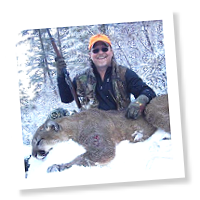 California Fish and Game president Dan Richards pressed more than many of our buttons here when he appeared to boast of hunting and killing a magnificent mountain lion in Idaho, verified in a photograph that spread faster than fire across the internet.

He proudly kneeled in his January hunt next to the 3-year-old, now dead puma, big smile on his face -- in sort of a screw-you-California stance. You are idiots here in the Golden State. But Idaho is much smarter;  hunting the big cats there remains legal. So that's what he did while representing us.

He shot the puma and later ate its meat.

As huge stories washed across the nation, the Trayvon Martin killing, the secret service gone wild and the government's general services frivolously spending our money to make whacky videos, Richard's hunting escapade took a back seat. We slowly began to let what he did fade.

We should not let this issues escape us for a moment, because what we have now  I consider akin to having a wolf guard the hen house or an aquarium director dropping a shark in the same tank with endangered fish. That fails to detail his absolutely preposterous arrogance and refusal to leave the post.

"While I respect our Fish and Game rules and regulations (are you sure?), my 100 percent legal activity outside of California, or anyone else's for that matter, is none of your business," Richards wrote to our politicians.

He must be joking. Doesn't he realize that when our then Gov. Arnold Schwarzenegger appointed him (and we all know how well that muscle-less leader did for our state) that Richards is not in a private position, but in an ever-so-public one.

So yes, it is our business and it should continue to be our business until he quits the post. Richards needs to vacate, because he's been given a precious task as the guardian managing our wildlife and fish resources. That involves not only our future, but the future of generations to come.

And yet it's so apparent that there's a great chasm between Richard's philosophy and that of California's - a state that banned cougar hunting starting when Governor Ronald Reagan made it illegal to hunt pumas in 1972. It received several extensions until voters here extended it permanently  in 1990.

More alarming is that our politicians -- who scrambled and clamored at first calling for Richard's resignation -- immediately backed away when hunters and gun enthusiasts built a ground swell of support for the Fish and Game president.

Come on political guys and gals. Have some guts.

It's truly a story of Richard's moral compass and about his ethics. That's the crux of the matter. He represents our state whether he likes it or not. And he was in violation for taking a $6,800  freebie -- not paying it back until critics vehemently opposed his actions.

Richards, for instance, violated California's laws that clearly states public officials cannot accept gift more than the $420 limit. Later, after the media maelstrom-- the president repaid the fee to the Idaho Flying B Ranch where he was given the initially free guided hunt to catch the cat.

Since he did pay -- albeit later than the 30 days allotted and likely only prompted by the ire it raised in the media -- the Fair Political Practices Commission just sent him a stern warning that he was in violation.

But Californians, we must ask ourselves: is this the man we want guarding our resources if his ideals don't align with ours?  Despite our efforts, we are losing the big cats still.

At least 11 mountain lions and possibly up to 20 have been shot and killed illegally up in Tejon Ranch, a vast swath of private land that rests to the east of Interstate-5.

And while Fish and Game charged the corporation-- which owns 270,000 acres of the California's wild lands-- about $137,000 for killing those pumas, I am awfully uncomfortable having Richards in charge -- obviously a man who believes in shooting them for sport.

The Tejon ranchers believed the pumas were killing big game, such as deer and elk, which competed with the corporation's high-paying private trophy hunts at the ranch.

State officials need to encourage Richards to leave and then appoint someone who doesn't believe in cougar hunts and has a willingness to care for the animals and fish in this state.


Richards then -- can go live and work in Idaho -- and hunt pumas until his heart is content.
Posted by theunderdogforkids at 6:06 PM 3 comments: Links to this post