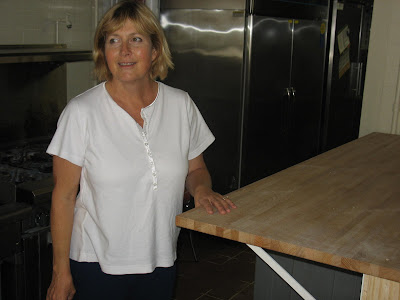 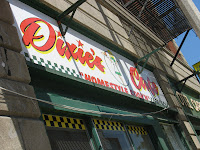 Former Corner Store Owner Takes Over the Dixie's with Wonderful Promises of Fresh and Fascinating Foods at a Mid-Range Price;
Food is An Art for this Owner
Susan McKenna prepares to open Nosh in July.
Diana L. Chapman

After building a business on sweat, blood and the “kids” – two Australian gals who made the Corner Store a booming non-alcoholic watering hole for the surrounding community and helped scores of friendships bloom are at it again – at least one of them.
One will own a new downtown eatery; The other will help.
If all goes well in the month of July, Susan McKenna will open the doors of the former Dixie Diner on Mesa Street as a new eatery called “Nosh,” which will be filled with delicious treats starting off with light breakfasts and lunches – and of course, something different – a line of toast.
Sound tempting?
Not yet?
Imagine this: Toasted artisan breads. Choice of toppings: Avocado and bacon spread. Salmon with cream cheese. Roasted tomatoes. English baked beans. And that’s not for the sandwiches and salads that will be served. That’s just for the morning toast.
Having been a frequent visitor of Corner Store over the years, I was surprised that Susan had embarked on another business venture. Last time I talked with her, she had decided against it just for the much needed break after running the popular Corner Store business for nearly eight years with her good friend, Marisa Giuffre.
But when Dixie’s closed down, Susan couldn’t resist taking a look at the space and jumped in with both feet flying – and Marisa – while not a financial partner has opted to help.
The former site, which has failed at least seven times in the past and probably hung on the longest as ironically, the Australian restaurant, Wallaby Darn’s, closed recently and perked Susan’s enthusiasm to trust her instincts, go with “fresh and the slow food movement,” that burst out of Italy -- instead of embracing corporate food. Fresher products spark Susan’s cooking spunk and imagination, she said, “because in the corporate food world, everything tastes the same.”
Thus, the toast line.
“What is so great about Southern California is that it’s a great incubator for food chains,” Susan explained to me as we sat in the new shop with workers nosily sawing away to build new countertops. “But I had just come back from San Francisco and from Chicago where there’s still a lot of Mom and Pops and independents.
“It was inspiring to go there and just have such good food and eyeing all the spaces,” for fresh food such in San Francisco’s Ferry Building where the inspirations are tempting but remarkably expensive, she reflected.
“I just thought: “Let’s just pitch a little higher, a little bit better and not be the lowest of the common denominator.”
Serving eggs, a question that Susan has been repeatedly asked by former patrons? No. A half-dozen restaurants already do that in town. She just wants to provide other choices for diners – where they can either dine and or take out, snacking on the usual suspects of cappuccinos, pastries, and muffins –with a lot of added flair, such as her toast line – and designer salads and sandwiches, yet to be revealed. She’s still creating them. For her, food is an art. She will serve hot chocolate, Italian sodas, fresh lemonade, ice tea made from scratch – and what else – is still unfolding.
While I was interviewing Susan, my doubts that she would open the July 4th weekend were growing. Her phone rang constantly and construction crews interrupted every few minutes to ask questions. It reminded me so much of my home life, where we are currently undergoing a remodel that I couldn’t believe she could possibly open the doors by then.
Every month, we think our remodel is about done. But then we go into yet another month.
But then miracles do happen – and perhaps that will be true for Nosh.
My biggest thought, however, is I just can’t wait for this place. I like something different. I like something fresh. I like choices. I like that she will provide a lighter fare of food – sandwiches and salads – not full, heavy meals here. While the rest of us eat food, Susan’s designing it like an artist toiling away on a canvas. That’s truly how she sees it.
So I suspect we will be eating some most interesting tastes at her place.
While we both suspect their won’t be too many children in the beginning – but mostly downtown San Pedro employees – she most certainly has learned not to ignore the thoughts and desires of children – because local kids are what saved the Corner Store. They were the springboard to its success. Once an old, dumpy liquor store, most adults would not walk in. But the kids kept coming to buy candy and they awed by what the new owners were doing
The kids, she said, begged their parents to come and look at the store and that prompted the Corner Store to flourish.
Keeping that success in mind, she will serve peanut butter and jelly and cinnamon toast – and treat them just like she did at her former business.
“It’s sort of like how you treat kids is how you should treat people in general,” she said. “You just treat them nicely and respectfully.”
As children watched the redesign of the store take shape – with its unusual twists of offering English pork pies alongside lattes, the parents finally began to come and started to discuss local politics, friendship and introduce neighbors who had never met one another before.
Friendships formed fast and furiously.
` Constantly, their patrons asked Marisa and Susan to make sandwiches at the Corner Store, which due to a variety of holdups, they couldn’t legally do – even though they wanted too.
Now, Susan said she’s thrilled by the prospect of finally being able to make sandwiches, but people are dropping by and asking her now: “’ Will you make eggs?”