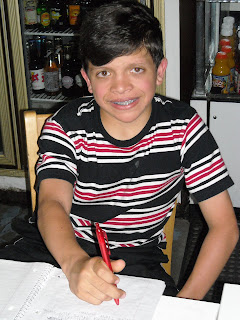 Despite Coping With Noonan Syndrome, This Boy Can Whip Up A Satisfactory Tale in Fifteen Minutes That’s Organized and Structured As Long As He’s Given Room to Create Safely – Like Most of Us

Meet Casey Mezin, an Exceptional 12-year-old, Who Shaped a Story Called Yellow Bird from a Sticker; Don’t Miss This Marvelo0us Piece Where he Prods Adults to Take Notice of the Beautiful Blooms in Their Lives

I can’t resist when I meet a kid like Casey Mezin, who tackles more difficulties than most of us will in our lifetimes.

The 12-year-old San Pedro boy has a genetic disorder, Noonan syndrome, which prevents him from developing normally.

For his age, his heart is enlarged (which is much bigger and thoughtful than most people I know). His frame is thinner and much tinier for most children his age – especially for a boy. He has big, buggy eyes (that I consider beautiful), a curly mop of hair and yes, difficulties putting together his thoughts – which sometimes make it seems like he stutters.

Those who don’t know him, probably don’t stop and think about it much.

Or they might not understand that in his life time, he will likely face having a heart transplant and that his condition won’t ever allow him to grow physically the way most children flourish. Sometimes, it makes other kids not want to play with him, but that’s because they don’t know what they are missing.

He seems full of weird wisdom, such as when his mother, Kim Kromas, and his sister, Keli, 9, have spats.

“He says sometimes: ‘Mom, Keli is very young and she doesn’t mean what she says,” explained his mother, Kim Kromas, a San Pedro chiropractor. “"I want you to visualize something else when you’re mad, something beautiful.”"

That makes his mom laugh. It seems like we all need Casey’s in our lives as a daily reminder that life is beautiful and spending time being angry isn’t worth it.

My relationship with Casey, and his sister, Keli, 9, started after Kim asked me if I’d work with her children on their writing at the Corner Store on 37th Street, a great neighborhood hangout. I suggested that we get a handful more children, which Kim did, because kids work better at helping each other in a safe and nurturing environment.

Keli, of course, a natural writer, quickly reduced her run on lines and shortened up her work in neat packages with a bow on them.

I really wasn’t sure how Casey would do. But somewhere along the line, Casey had some darn good teachers, because I was dumbfounded by his ability to write with such an organized structure and rhythm.

When I gave the students all stickers one afternoon and asked them to write about it, Casey wound up with a yellow bird. And this is the tale he spun:

My character’s name is Yellow Bird. I name it that because she is yellow and it is a bird.

She carries her crayon to keep herself healthy and rubs it all over her body. She does it every week. But if she loses her crayon, she will get sick in a week. If weeks pass, then she wouldn’t be able to fly. And when months pass, she better find her crayon…and fast!

She is kind and loyal to people. When she sings to people, they completely forget why they were sad, scared, hurt or angry.

At Yellow Bird's first day of school, she was excited because

she knew that she would make new friends.

She had at least thirteen kids in her class. Some of their names were: Key Train, Beef Neck, Chris Cross, Bacon Head, Sausage Teeth, Egg Eyes, Face Change and Night Hair.

Yellow Bird couldn't believe how many kids there were. Their teacher's


What they did the first day was learn their ABC's, build clay, make dolls, learn addition and subtraction and sing songs. They did a lot of stuff.

The teacher asked Yellow Bird to sing for them and she was surprised when even Beef Neck loved her voice. What a first day of school.

Once, Yellow Bird and her class had a week of camp. She couldn’t wait

to go. She packed all her clothes: PJ's, food, and all sorts of other things.

It took two hours to get to the camp.

First, they learned how to fly faster, and better in case cats tried to eat you.

Next, they learned how to turn, and hover. Yellow Bird wasn't the best or the worst at hovering.

Everyone has trouble hovering on their first try.

Then, they learned how to glide in for worms when they are trying to

escape. Finally, they tried to practice their signaling in case they ever got

One of the kids got scared and started to cry, but Yellow Bird sang to him to make feel better, so he stopped crying. His name was Egg Eyes and after he stopped crying, he told everybody why he was scared.

He was homesick, but Yellow Bird’s singing made him happy again.

And so, Yellow Bird and her class went home on the last day of

She slept soundly knowing she made new friends, who loved her voice and gave her thirteen more good reasons not to lose her yellow crayon.

Posted by theunderdogforkids at 10:48 AM No comments: Links to this post