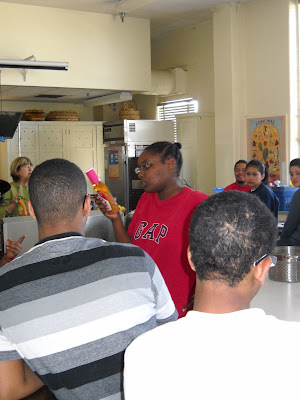 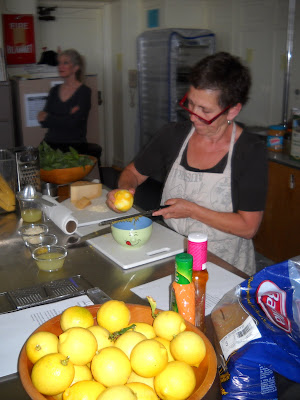 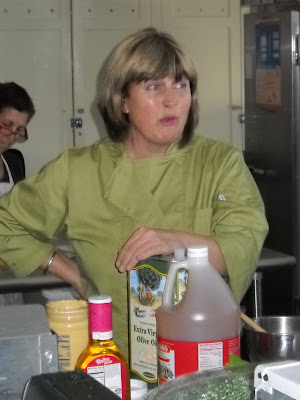 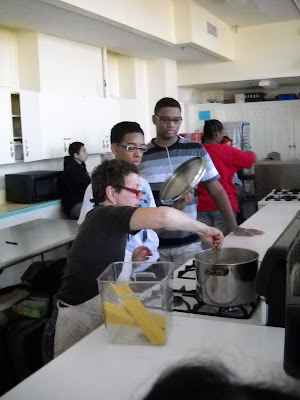 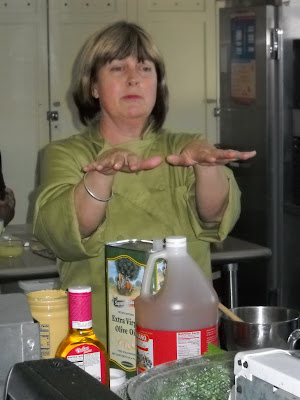 
TWO COOKING EXPERTS – THE FORMER OWNERS OF THE COMMUNITY ORIENTED CORNER STORE – BRING THEIR EXPERTISE TO WHAT BETTER PLACE – SAN PEDRO HIGH SCHOOL WHICH LOST ITS CULINARY CLASSES THIS PAST YEAR;

THE AWESOME TWOSOME HEAT UP AN AFTER SCHOOL COOKING CLUB THAT’S MET WITH MORE THAN DELECTABLE DELIGHTS; THEY KNOW THEY COULD RUN IT EVERY DAY AFTER SCHOOL IF ONLY THERE WAS MONEY, TIME AND MORE VOLUNTEERS; THERE ARE MORE THAN ENOUGH STUDENTS

Squished side by side, the students practically crushed the culinary room with big eyes, good behavior and beaming interest in something San Pedro High School recently lacked for the past year – anyone to teach them how to cook.

Boil a pot of water. Break an egg. Cook up a plate of pasta. That’s what scores of teenagers wanted to learn, but their former Culinary Teacher Sandy Wood retired last year and no one was hired to replace her.

But as usual and just in a pot of time -- when it seemed the culinary scene for the high school was over -- Susan McKenna and Marisa Giuffre arrived with big hearts for kids and a dream to teach students how to whip up meals for themselves. The former owners of the popular Corner Store -- stepped up to the dish – and launched a “survival cooking club,” in May after school every Monday.

They plan to continue, with perhaps expanded plans, in the fall.

With not much time left in the school year and more than 57 students signing up straight away and more asking to join, the experts have already taught students how to make affordable delicious dishes from fresh lemon pasta to making their own salad dressings from scratch.

The first day of the class, Susan, who now owns a cozy eatery in downtown San Pedro called Nosh Café – asked student, Tiffany Barber, a junior, to read out the ingredients in a processed French dressing:

“There is absolutely no reason on earth to buy salad dressing,” Susan told the students as they boiled pots of water getting prepared to make pasta. “It’s easy to make.”

They wanted kids to get away from becoming sugar-aholics and fast-food addicts, and show them how the meaning of true food – cooked from your own ingredients – can be easy – and tasty. Call them both “foodies ” -- and it looks like many of their students will follow suit.

They especially want to target high school students leaving home and need this skill in their tool kit.

Get lemons free from your neighbors to make lemonade and other dishes, the women exclaim!

Buy a giant bottle of virgin olive oil from a cost-savings store that will last a long time and run about $13!

Shop at Numero Uno where the produce is good and often cheaper!

“The goal of this is shop well, cook well, eat well,” Susan explained during an interview at Nosh. “Those three things go together and then you can’t go wrong. There’s this bit of knowledge that you just need a few ingredients and you can provide a meal.

“There’s a sense of accomplishment.”

At the first session, students zested lemon peel, used leftover pasta water to make lemon pasta and had a delicious meal afterward. They giggled when scraping the peel and delighted in tastes that some described as “awesome.”

The students brimmed with pleasure in the class, many saying they would join again next year. Pots steamed. Dressing was whisked. And kids smiled.

One senior already plans to ask if he can come back even after he graduates; He’d even volunteer, he said.

“It’s really fun and the food is good,” said 15-year-old Caytie Briggs, who already plans to return in the fall and doesn’t cook at home. “The ladies are really nice and they explain everything so well. We made three cheese pasta. It was good.”

Rita Marquez, a 15-year-old sophomore, said she does cook at home, but mostly a Mexican cuisine of rice, meat and beans. Already, she has started making foods she’d never experienced before, such as pasta.

“Their food comes out really good,” she said, who added she was disappointed when she made it at home. But she plans to return anyway.

“I like it,” Leland said candidly. “We are cooking all types of different foods and we get to cook it! They don’t do it for us.”

Added Marsalles: “What I like is if there’s enough, you get second helpings.”

As this point, the culinary sky is the limit, the women say. They have bigger plans for the future, perhaps going non-profit and teaching at more schools. But for now, they are pleased just to be at San Pedro High. They plan to do fundraisers, maybe teaching parents to cook or hosting a dinner.

The next thing on the menu: they’ll just have to let us know.

Posted by theunderdogforkids at 11:13 AM No comments: Links to this post

LOS ANGELES RESIDENTS HAVE SEEN THE SIGNS: IT'S TIME FOR AN AREA OF THE GREAT METROPOLIS TO SECEDE NOT JUST FOR US BUT THE FUTURE OF OUR CHILDREN

Living in the city of the angels reminds me of an old joke: A man sits on his rooftop as flood waters treacherously surround his home.

Three separate times, rescuers come by and offer to save him.

“God will save me,” he responds to all three attempts. When the man died and arrived in heaven, he asked God: “What happened? How come you didn’t save me?”

As a Los Angeles resident, I feel like we – the residents -- are the man sitting on the rooftop -- ignoring all the warning signs that we are in dire trouble. The time to split up this monstrosity of a city is now. Not yesterday. This is for everybody’s benefit not just the nubs like the Harbor Area and the valley that seem sewn on like last minute attachments for one thing – money.

Even for those who want to remain, it must make sense to let areas go that want to secede. We are all getting less and less services as time goes on and a lackluster bureaucracy with excellent skills at out waiting and perhaps outwitting the City Council. How many more warning signs and slaps in the faces do we need before we wake up?

Let’s face it: Los Angeles is way too big for its britches – four million residents and the second largest city in the United States. In this case, I really believe for all of us in terms of size – less is more. Then add in this:

We have former Los Angeles Mayor Richard Riordan claiming the city is doomed and may go bankrupt. No matter what you think of Riordan, I don’t doubt his theory.

We have a Department of Water and Power (let’s nickname them Drunk With Power) with so much authority – more it seems than the City Council – that someone needs to unplug their power grid so they’re not in so much control.

We have a council now saying they can no longer fix the city sidewalks and as a unit -- spent a lot of time boycotting Arizona for its latest immigration stance – when in fact, there’s much to do about a lot of things right here at home.

Yes, we’ve tried in the past and secession has failed. Times are different now that Los Angeles seems as though it’s falling apart at the seams -- and then some. The city’s budget crises is a nightmarish, sticky mess -- meaning more resources and city services will be heavily cut. Forget seeing your trees get trimmed anytime soon! Your local park may be closed. And forget day care at some of those facilities.

The City Council has less clout, it seems, than ever especially over the DWP who seemed to call the shots on its recent 4.5 tax increase on residents and businesses – one that was done in darkest recession since the depression. The council realized how detrimental it is to allow the mayor (in this case Antonio Villaraigosa) and the DWP to decide this matter – and is now trying to change the City Charter so council members can get a handle on what the department does.

I can’t help asking: why wasn’t this done before? It’s never good to lay so much power in the hands of an agency and the mayor.

Earlier this winter, Antonio wanted to raise utility taxes even higher – ignoring that many of his residents are out of jobs and many adult children and their families are moving back in with their parents just to make it through this crises.

Antonio’s drive for the taxes for a greener environment lacks common sense at this time. Do we really want to feed one mouth and take it out of another?

I know thousands of us see it, but our mayor appears blinded byhis own ambitions.

“It will never happen,” my husband argues of any secession. “The rest of Los Angeles won’t let anyone go.”

I believe now – the time has come where many Angelenos will be ready to break up the city since it’s so down-trodden with woes from financial issues to giant sink holes – to overly powered departments – who often have more clout than the City Council itself.

They are waking up. And are, like many of us, sick of it.

Therefore, I’ve said it before – and I’ll say it again – it’s time to let a section of the city secede. Letting go of the valley or the Harbor-region, the remaining “Angelenos” as the mayor calls us might just see new and improved city services – a focus that’s culled down and a city in which we can at least see our trees trimmed, our streets paved – and a bureaucracy that not only answers to the council (which it appears do only sometimes), but its residents.

I know others have much faith in our Neighborhood Councils as the answer to our woes. But it’s been nearly a decade and there are still ridiculous things going on like having trouble getting park benches into parks (how difficult can this be?) and parking meters that work.

I can’t understand why this major metropolis can’t handle the smallest things without much debate and fiasco, numerous meetings and bureaucratic stall tactics just to get a bench placed at a park.

For all of us living in L.A., the time is now to make our own destiny and carve out a new future for Angelenos – one that actually works.

Posted by theunderdogforkids at 8:05 AM No comments: Links to this post