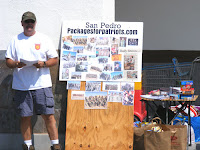 Mike collecting goods for soldiers in Afghanistan and Iraq. Mike says he couldn't do all the work without his wife, Shirley, helping ...and then kids like this who wrote and drew pictures for those fighting for our country. 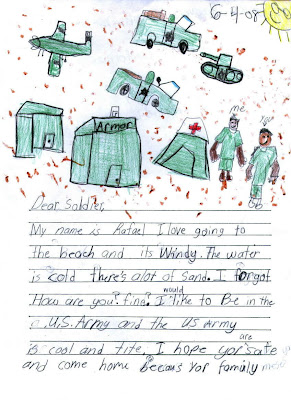 A MAN WITH A MISSION INTENDS TO GIVE U.S. SOLDIERS IN IRAQ AND AFGHANISTAN A BRIGHTER CHRISTMAS -- AND SUPPORT EVERY DAY THEY ARE SERVING THERE AFTER; AND HE NEEDS YOU & YOUR KIDS!! HELP WRITE CHRISTMAS CARDS TO LETTERS OR DROP OFF DONATIONS FOR OUR TROOPS
“I can never, ever, have enough,” said Mike Walker, who recently, on top of hundreds of other soldiers, agreed to adopt a brigade of 1,200 marines and send them care packages.
By Diana L. Chapman

He needs you to write a Christmas card or a letter.

He’d like you to provide cigars, heat resistant candy –such as licorice –toothpaste, liquid soaps, Pop-Tart ready-to-eat meals, Harmonicas, CDs and fruit to name a few things – and he, in particular cherishes notes and cards you’ve written to soldiers – especially right now.

With the winter holidays descending upon us soon -- and no matter how you feel about the war -- Mike Walker hopes you will support the troops, he said, as they are the wall that protects our freedom.

And the sooner, the better because it takes two to three weeks to ship anything to Iraq and “for the guys I have living in caves in Afghanistan.” It takes four to six weeks for parcels to reach them. Kids letters, in particular, seem to give the troops joy, he said.

Having packed off 3,800 pounds of food and hygiene products so far to soldiers in those two countries, and with the help of his website, called San Pedro Packages for Patriots, Mike started off small. He has asked that soldiers not be fully identified to protect them.

When he met his daughter’s friend’s husband, Gunny P, a Marine gunny sergeant, who was serving on his third tour in Iraq, Mike and his wife, Shirley, decided to send him a care package. The Gunny sergeant, who is now home, wrote back thanking Mike and explained he shared “everything,” with his troops.

The sharing concept went so deep into Mike’s gut, that even now, Shirley, wonders if they will have a Christmas of their own as their house has been gobbled up by hundreds of boxes and supplies that have been donated from all across the South Bay.

Even his business, San Pedro Automotive on North Gaffey, has seen a rising swell of boxes and supplies. After he realized he couldn’t afford it all, he asked his customers to help. His customers came through and began pouring the supplies in, including Q-tips and packages of Oreo cookies.

Incoming calls from the two countries, military officials thanking him for their troops, took Mike aback – to the point of crying.

One sergeant called and told him that his entire troop was luxuriating in the chance to smoke the case of cigars he sent.

“That was when I heard them all yell: ‘Thank you,” he explained as he showed me his board, a collection of photographs filled with soldiers faces thanking him for his support.” “I heard the whole squad shout 'thank you.' I called my Dad and I cried so hard. They are all thanking me. Wives and mothers call and are thanking me. Why are they thanking me? I’ll say: ‘You have a son that had done three combat tours and who has put their life and limbs on the line. You live everyday worrying about your husbands or sons. I can’t even imagine that pain.

With each packet sent, he throws in copies of letters from children like this. He’s asked several local elementary schools to participate and received letters. Older students also have started to write as well from the Boys and Girls club and San Pedro High School's Marine Magnet.

“Dear Soldier: My name is Ernie. I’m in 3rd grade and I’m 9-years-old. I really like tanks. Do you drive a tank? Thank you for fighting for our land. Who are you fighting right now? And what is your team name? What are your favorite weapons? Are you good at boot camp? Do you sometimes get hurt? I have so many questions. Do you own a bazooka? I love talking to a soldier. What is it like being a soldier? Well bye until you write back.”

Another San Pedro child wrote: “Dear Soldier: I’m in third grade. What branch of the military are you in, Nave (sic) seals, Marines or Air Force? I think your family is proud of you for helping the country in war. What kind of weapons do you have? Have you ever been in a tank before? If you have time, would you please write a letter to us, please.”

Mike can tell you dozens of stories since he began to ship out scores of packages to those serving from all the Armed Forces in the current war. The stories are practically leaping off the pages. So many letters and calls have come in, since he decided to go all out last February and ask for help, that he’s tickled and overwhelmed at the same time.

Here are some of the stories:

Then there came the day where the shipping costs were growing into thousands of dollars and his wife told him to calm down: “’God will take care of it,” his wife said, Mike reported to me. Mike wasn’t so sure.

The next day, a man showed up to give him $50 to help the marines in any way he needed. Mike refused saying he wasn’t a non-profit and didn’t have a way to take the money.

Fortunately, the man convinced Mike simply by saying this: “"I wish there had been someone like you when I was serving in the 1991 Gulf War, sitting in the middle of nowhere in120 degree desert and drinking hot water. You are going to take my money.'”

Since then, Mike agrees to take money to pay for shipping costs and those expenses have been covered via donations.

So committed is the mechanic and business owner, that several times he set up shop at local stores, such as Ralph’s and Sam’s Club, so that shoppers could make purchases and give them to Mike and his waiting truck. Each time, the shoppers have shown mass support for the troops–and overflowed his truck with goodies. It almost looks like Mike look is working for Santa Claus.

One of his most successful days, he explained, was when he learned about Brian, an injured marine who stepped on an IED (improvised explosive device) and was only saved because the “blasting cap didn’t go off.” Brian was shipped home to recuperate from the injuries to his leg in the Newport Beach area. Placing Brian’s photo up on a truck, moved so many shopping at the stores that dozens wrote get well cards and some even donated money, totaling $32. Mike and his wife happily delivered the cards and money in person.

The soldier, he said, was first speechless and then just overwhelmed.
As endless as the war has seemed, the stories Mike can tell are never ending as well. He received calls from soldiers asking for soccer balls and stuffed animals that they could give to the kids in the two war-torn countries to give them hope. He’s been able to accommodate both requests. One woman came in and offered 400 hand-knit beanies, which he immediately pointed out would help troops in the chilly winter of Afghanistan.

It all boils down to this, he explains.

“I challenge people to do something,” he said, revealing it doesn’t matter how you feel about the war, but that people should focus on the fact that these men and women are willing to die for us. “These men and women don’t want your pity. They want your support.”

Mike’s biggest regret since he started this is: he can’t do it full time since he has to work. If he gets an inheritance or runs into some big cash, he will quit working and devote his life to helping those soldiers who put themselves in harms way to protect us, he explained.

For a full list of items needed and more information, visit: http://www.sanpedropackagesforpatriots.com/
To drop donations office, they can be left at San Pedro Automotive, 1208-C N. Gaffey, San Pedro. Or call (310) 831-3700.
Posted by theunderdogforkids at 7:25 PM 1 comment: Links to this post