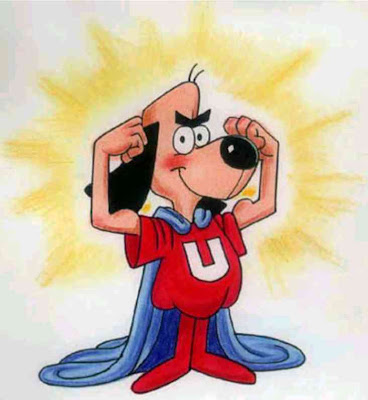 This is an odd story. If you don't like the fact that people sometimes derive their values from cartoons and comic books, quit reading now.

I'm often asked: Why did you call your blog The Underdog for Kids? It's one of the most frequently asked questions in my peculiar journalism career, which has taken twists from writing for daily newspapers to writing for the Chicken Soup for the Soul series to blogging (where I least suspected I'd end up).

I have one person -- no, actually two -- to blame for the Underdog name.

The first would be my admirable neighbor, Judi Pierry, who routinely puts up with my 13-year-old son practically moving into her house with her two sons, Joey, 18, and Jimmy, 16, who embraced him from the moment he moved into the neighborhood. Their older sister, Jessica, just grinned and beared it, to have one more boy in the family. She was probably quite relieved to take off to San Francisco State University. Because the Pierry household is much cooler than my own -- a pool table, a widescreen TV, rooms equipped with computers and games -- and a mom who realizes the beauty of enticing her kids to stay home rather than go elsewhere so she knows where they are: The kids like it there.

With Ryan's frequent visits, she teased us as "the childless couple." About a year ago, just before the weekly More San Pedro newspaper changed hands, Judi asked me over for lunch with her girlfriend, Chris. She plopped a glass in front of me and said: "Diana, this is perfect for you. You're always protecting the underdog and acting just like the Underdog cartoon."

On the glass was the cartoon of the blue-caped, red-shirted, skinny armed, slightly muscled Underdog, and that was when lightning struck. I had watched this cartoon religiously as a child -- and any show such as Little Opal -- where a dog was always helping others get out of horrific plights when no one else would bother -- a theme as a child, I just couldn't understand. I was like: "Where are the heroes?" -- the same question a famous charter principal talked about later while he was practically starved as a child in New York ghettos. Where are the adults? Where are the heroes, he asked himself.

It hit me, at that moment, that Judi had unearthed an inner secret I didn't know about myself. What shocked me even more was that not even my husband or other friends had figured it out, either. I don't think I'd even thought of it before. I love to protect the underdog. It was my calling, my inner being -- and children were my first and foremost ones to care for -- especially children no one else cared about.

When I came home and told my husband that night, he gaped at me with the same reaction I had: disbelief. How could we have not figured this out much sooner? It hit us both hard. How can awoman who has only known me a few years figure this out before we did? We've been married 19 years. It was because she read my column religiously and noted a major theme in all my writing: Who protects kids when their parents don't care? Who protects kids when their parents don't know what's going on? And who protects kids whose parents might be interested some of the time but not often enough to help them grow into an amazing adult? The answer? No one.

Worse, why do adults firmly believe that kids who grow up in a ghetto, or just -- heck -- bad parts of San Pedro, Wilmington or anywhere else, should do A-OK and learn important values like politeness, honesty and respect when their lives are enveloped with troubles we could never understand -- gang members forcing them to do things they don't want to do, drugs permeating their neighborhoods, parents on drugs or alcohol, family member who are molesters, families who believe moving ahead is working at a Taco Bell for the rest of your life or babysitting your kid sister's baby, or having parents who believe in cons or forgers as a way of life. And we say: "You have the choice. You know what to do. You know the right thing."

Do they? I can't imagine how. Soon after my shock of learning something about myself when a friend placed the Underdog glass in front of me, I found myself with another friend, Marie Montgomery. Marie, a former Daily Breeze reporter like me, is now a public relations specialist for the Auto Club. We've both been living through the heartache of watching newspapers becoming dinosaurs with all the instant technology that floats about in a matter of seconds. DVDs here today, gone tomorrow. As for CDs, records are out to lunch. CDs? What are those? Now it's I-Pods. What are record albums, my 13-year-old asks about boxes stored away in the garage? Sometimes I wonder if he's ever seen that black, smooth pizza plate with perfect grooves. Newspapers? I want to cry because they're still one of the best educators of all time -- for very little money -- but they're almost as ancient, dead, salty and musty as the Dead Sea Scrolls. Marie, quite the hip gal even as we are showing our age these days, asked me: With all these changes -- and a newspaper job is likely to be here today and gone tomorrow -- have you considered blogging? She too was somewhat amazed that -- despite having known me for more than a decade -- it was my neighbor who saw my true core: a fighter for the underdog.

Marie promptly announced: "Start a blog. You can name it 'the Underdog!'" Crazy. I looked at her. But the Underdog for what? I demanded. "Kids!" she exclaimed. "You love kids. You fight for kids!" How right she is.

I started the http://www.theunderdogforkids.blogspot.com/ with some pretty sage advice from my friends, who seem to know me better than I know myself. Shortly after, the Breeze was sold, my job was cut in half and, since it paid next to nothing anyway, I figured why not work for myself? If you're not getting paid much, you might as well enjoy it -- and write what you truly want to write -- how to rescue kids that need rescuing. I call it advocacy journalism -- and despite layers of bureaucractic journalism ethics that don't recognize advocacy -- I can't help myself. It's just the way I am and will always be.

Shortly afterward, I saw a movie preview of the upcoming "Underdog" movie that was being resurrected and would be released Aug. 3. I'll be the first underdog there -- and somehow, I don't believe it will hurt a doggone bit if you take your kids, too.

Posted by theunderdogforkids at 6:56 PM No comments: Links to this post