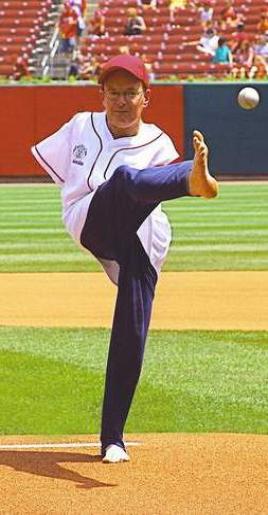 How Do You Pitch With Your Feet at Major Baseball Fields Around the Country?
Tom Willis Can Tell You
By Diana L. Chapman
He’s flown more than 32,000 air miles, traveled countless times by trains and bus, driven himself around the United States  – and pitched 14 times at national baseball stadiums in the U.S.A .  That may seem like no triple run.
For Tom Willis, it’s a homer. Born without arms, he pitches with his feet.
Despite his lack of appendages, Willis, 52,  of San Diego, never let that stop him. He  threw a ceremonial pitch across home plate at Dodger Stadium in April  before doing the same this past summer at the Boston Red Sox, Arizona Diamondbacks and Houston Astros ball fields.
As a  “congenital bilateral, upper amputee, a fancy way to say no arms,” Willis said, he settled on one decisive goal:  to convince all 30 stadiums in the U.S to let him do the open ceremonial pitch so he can show off just what the disabled can do. So far, he's visited 14.
Each time he does it, he’s greeted with thunderous applause from thousands.
“My main message is I look different, I act different and it’s o.k. to be different,” Willis explained. “That’s the message I’m driving home for kids. For adults, the message is: “You learn to take what life gives and move forward. Give it the best you have. I want people to think ability – not disability.
“I wanted to be a baseball player, but I couldn’t. But this is what I can do.”

Willis’ story is long – filled with endless body casts and cruel surgeries -- and sad – if you want it to be. His drive, however, forces him to pursue one major achievement after another so he has little time for sadness.
This is why he drives a car using a foot-steering controls, earned his Master’s degree in adult education from the University of Maryland, took a public relations job with the U.S. Department of Agriculture that flew him around the country --  and later decided he should pitch at every U.S. Major League stadium.
It’s this very attitude he brings to schools when doing motivational speaking – shocking students when he tosses toys and balls directly at the person he’s aiming for. He also has no problem standing up for himself. He took issue with KROQ Talk Show hosts Kevin and Bean when Kevin claimed Willis was stupid  for trying to attempt these pitches. Willis contacted them, went on the air and called Kevin to the plate for his ignorance.
Kevin apologized, he said.
No Easy Life
None of this means his life was easy.  When he was born in 1959, several doctors and a priest impressed upon his parents, Richard and Frances, how much better the armless infant would be in an institution.
Strong Catholics, the parents responded with: “Bring us our baby,” Willis wrote in his unpublished book called “No Hands, No Arms, No Problem.” 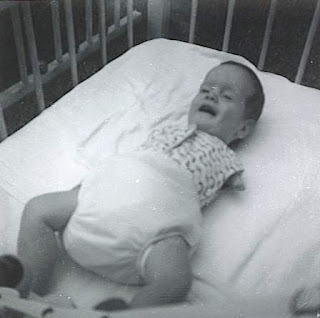 While things began to look up, at 10-months old, his father died unexpectedly from cancer, leaving Frances, to care for Willis and his two older siblings. His mother turned out to be a mountain of strength.
“My mother sucked it up and raised all three of us kids, “Willis explained. “My mother taught me: “This is who you are. You can sit around and watch TV or you can go out and do.”
And do he did – despite many interruptions along the way from frequent hospital visits to several major surgeries to falling down repeatedly on his face while  learning to walk.
At age three, scoliosis slipped into his spine and began to curve it – which eventually became life threatening despite that as a little boy he wore body braces, casts and did traction. The scoliosis insidiously forced the curvature to continue and by age seven, it reached an 80 degree angle slowly crawling toward 90. It’s like “your body is being folded in half and compressed,” Willis said.
So he wouldn’t die, this meant spinal fusion surgery at 7-years-old, one day after his birthday. Before the surgery, he was put in another plaster body cast from his neck to waist so doctors “could get me as straight as they could.” Then, two metal Harrington rods were infused into his vertebrae to keep him erect.
“They slapped me into another body cast and sent me home,” Willis explained adding that he would wear it for an entire year even during the muggy summer months. Employees at his deceased father’s company pooled their money together – and bought the family an air conditioner so he wouldn’t suffer even more.
Willis Kept Going
Despite the agony, Willis kept going. After all, it was the way his mother had raised him. She volunteered every day at his school to help pay for her children’s attendance.
Besides his mother – who continued to work as a nurse until age 83 – the pitcher said he’s grateful to Our Lady Sorrows Catholic Church in Takoma Park, Maryland which ran the elementary school he attended. The school, he said, instead of fearing his lack of arms, embraced him and his entire family.
“I was never taunted, nor teased,” explained Willis, who believes it was his mother and school officials that made him courageous enough to pursue things he could not do – at least not in the traditional way. He joked that students didn’t risk teasing him because they would likely face strict punishment from the nuns.
Students there also adapted baseball – a game Willis adored -- so he could play too. They had him run for several batters. It might have helped that his two older siblings, Kathy and Michael also played.
In high school, he opted to try out for soccer despite knowing he wouldn’t make the team. He poured his guts into practices and forced himself to make at least  a “pitiful” goal. He paid for it later. He was in burning pain for the rest of the day.
As he predicted, the list of soccer players who made the team did not include him.  But the soccer coach called Willis into his office and said: ““I’m making you team manager.””
That worked well for everybody, Willis added.
In high school, he went on and did several plays. His friend, who was directing, gave him the role of an armless pirate in Peter Pan. Of course, in college he learned no one would bend rules for him. That was the “reality.”
And while he did have a chance at a bit of normalcy by using artificial arms when he was younger, that didn’t work entirely for this armless kid.

After awhile, No Prosthetics Needed
About age 3, Willis received prosthetics which he wore to school every day as he learned to read, write and paint. But in the evening, he took them off and started doing the same things with – his feet.
“Those suckers are heavy,” Willis added of the instruments.
But once the major surgery was performed, he could no longer wear them and went without the artificial limbs for an entire year, which strengthened his ability to use his feet.
Finally, once the neck-to-waist body cast was removed a year later, Willis was placed back into a brace that included mounts  so artificial arms could be plugged in.
The arms were expected to make his life easier.
But their weight alone caused him to wither in exhaustion. The arms, he said, pushed away from his central force, causing him imbalance and pain. Frustrated, he found himself repeatedly removing them.
“When I got home at night, I would take off the heavy, cumbersome prosthesis,” he wrote in his book. “I was a tiny child and it was a heavy machine made of wood, metal and wires – no space age materials back then. Once the prosthesis was off, which I much preferred, I immediately began using my feet and toes for everything.”
And that’s when he really began to focus on working with his feet.
He learned to paint, color, write, dress, brush his teeth  – and later pitch – with his feet. He can do anything, he said, that any other person can do. He just does it with those two appendages he stands on.
His feet, he concluded, were his shot at freedom.
Could Willis pitch a baseball with his feet?
In 1980, Willis finished college at the University of Maryland with a Bachelor’s Degree in radio, television and film production – magna cum laude -- and earned his Master’s degree in educational technology in 1988.  He held a variety of careers, first  working for Arbitron Ratings and later at the U.S. Department of Agriculture where he held posts such as a video and satellite television producer and a public affairs officer.
Now married to Mary Lou, a single mother, and having a step-daughter Melissa, he  landed a public affairs job for the department’s forest service in San Diego and launched Tomsfeet Productions. He became a “motivational speaker” with the goal of  breaking down barriers the public has with the disabled – in particular kids.
One day, Willis displayed to elementary students his abilities – pitching tennis balls at the audience -- and  caught the eye of a Cox Channel 4 reporter who covered the San Diego Padres.
The reporter suggested Willis come to Petco Park and toss the ceremonial pitch for the team.
The trouble was, Willis wondered, could he pitch a baseball – which is much heavier than a tennis ball – and make it from the pitcher’s mound to home plate -– a throw that had to be at least 60’6’’?
Because Willis didn’t turn down challenges, his friend Michael Million, a Little League coach, prepared him for the opportunity.
Together, they worked out a plan. Within ten days, Willis had tossed 100 pitches a day, three days a week using what he calls their ABC plan:
a)     Alignment—Feet have to have proper alignment on the mound.
b)    Ball—He had to have a good grip on the ball
c)     Catcher—Make sure he had eye contact with the catcher’s mitt
d)    Dig—Left foot must be dug back to maintain proper footing
e)     Explode --Whip right leg out carrying the ball and make the pitch (He is right-footed instead of right-handed.)
Even with all that practice, Willis could only pitch 58 feet and he worried incessantly that the ball would drop just short of home plate by two feet. He didn’t want to settle for that.
Finally he decided:  “I’m going to go up to that mound. I may never have a chance to get to a (professional) pitcher’s mound again. Success was going to be getting up and doing it.”
In 2008, he did his first pitch for the Padres and “it was terrible.” Still, he learned the club’s patrons were amazed and exploded with applause.
“I thought I should do this in every stadium in the country,” and ever since he’s been roaming the country like a western cowboy. Now, however, he can throw the ball across home plate and does look for donations to help him pay the travel costs.
While Willis is pleased so far that’s he hit up about half of the stadiums, he won’t consider this a success until he’s pitched at all the country’s Major League baseball stadiums. He wants to continue his mission to peel away the mixed messages people carry about the disabled.
In this world, he explains, as his mother always did:
“You take what you get,” Willis said he tells his audiences. “You adapt and you move forward. Otherwise, you go nowhere.”
As always, Willis is going somewhere.
To find out more about pitcher Tom Willis, visit his website: http://www.tomsfeet.com or email him at tom@tomsfeet.com. Visit his other site: www.pitchforawareness.com. He can be reached at (619)-723-4015.
Posted by theunderdogforkids at 7:39 PM No comments: Links to this post