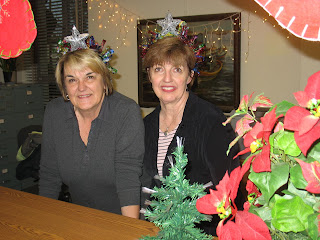 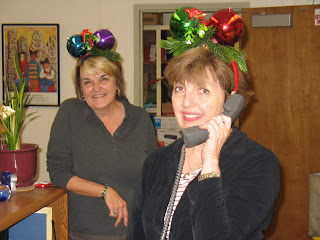 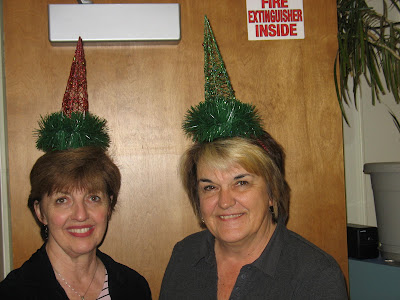 TWO WOMEN KNOW HOW TO SPREAD HOLIDAY CHEER – IN A MOST “TACKY” WAY; MOST OF THE TIME IT WORKS, BUT NOT ALWAYS


In a world of stress, from complaining parents to employees failing to receive their paychecks on time, two gals who work for the Los Angeles Unified School District lighten the load by spreading a butterball of cheer that might even make the Grinch laugh.

Wearing zany fashions from Christmas trees topping their heads to giant to baubles, Carol Knight, a purchasing/text book secretary, and Marie Dukesherer, an administrative assistant, try to brighten the days in the Main Office at Dana Middle School during the busy holiday season.

They begin to adorn their heads starting Dec. 1 to Dec. 14 – the ten days left until winter break – with gaudy ornaments just to see if they can make people even in the worst of moods – that often come from holiday stress – happy.

“We just do it to promote laughter and good will in the main office,” explained Marie, who said the two employees have been doing that – and other holidays for the past eight years. “Everybody loves it and thinks it’s a lot of fun.”

Said Carol: “Why do I do it? Because we’re goofy. It just makes people happy when they walk in and see how stupid we look. It’s like: “It’s those goofballs in the office again.”

For myself, I absolutely love it. Around the holidays, people are so crazed, students are ready to get out of school, teachers are ready to rest – and the blaring trumpets of buying gifts and preparing for visitors – often makes people testy. When I first saw their headbands, I couldn't quit laughing -- especially knowing how irritable I can get myself during the holiday season.

Just how testy do folks get? These women know, because sitting behind any Main Office at most schools is one of the most demanding, multi-tasking jobs in existence. Phones ring off the hook. Questions pepper the employees daily – often the same question. The women even say, they forget to look up while emerged in work when someone asks how they are doing, not because they are being rude, but because they’ve been asked that about 200 times already that day.
Along with: What time does school get out? Who are those flowers on the counter top for? Where is the principal? Can you help me find my lost back pack? What room do I find this teacher in? Where is the nurses office? The attendance office?

The problem with these jobs is there is rarely a break. So you have to laugh, Carol and Marie explain. That’s why the two hobbled together some odds-and-ends of holiday decor using a hot glue gun and all sorts of ridiculous things such as giant bows, stars and ribbons.

For the most part, it cheers most people coming through the office. But not always.
It always surprises them when those they never seen before don’t say a word.
“A lot of people just come up and don’t say anything,” Marie said. “And that’s when we have the most outlandish costumes on.”

They’ve never received a complaint about what they do. But Carol does have one complaint herself. She says they often put “tacky" plastic mistletoe on their bands, but: “Nobody ever kisses us!”
Posted by theunderdogforkids at 1:46 PM 1 comment: Links to this post