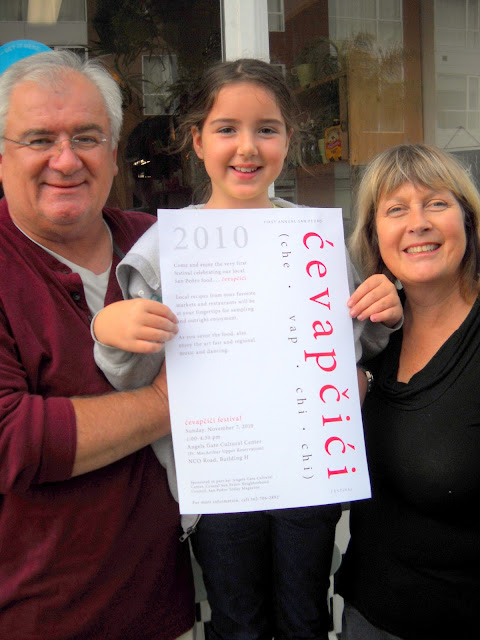 Susan McKenna, owner of San Pedro's Nosh Cafe, Slobodan Dimitrov right, and his daughter, Kristiana, 8. The two business owners teamed up to make the first čevapčiči festival at Angels Gate Cultural Center.
A NEW FESTIVAL FOR SAN PEDRO POSSIBLY BECOMING A SIGNATURE EVENT? THAT’S WHAT ITS CREATORS WANT AND ARE CALLING ONE AND ALL  ACROSS LOS ANGELES WHO LIKE THE SKINLESS SAUSAGE CALLED  “Ćevapčići” TO ATTEND
THE UNUSUAL EVENT WILL BE HELD NOV. 7 FOR THE POPULAR FOOD THAT SWEPT  IN HISTORICALLY FROM TURKEY ACROSS THE BALKANS, INTO CROATIA, OTHER COUNTRIES AND LATER TO AMERICA
By Diana L. Chapman
Come one. Come all. In particular – if you like čevapčiči (che vap chi chi) – a popular, skinless grilled sausage brought by immigrants landing in the port community of San Pedro more than six generations ago.
Originating in Turkey, the meat dish – initially a mix of beef and lamb – migrated across the Balkans and when immigrants arrived in the harbor community, they brought the succulent sausage with them. Later recipes sometimes added pork.
“It’s produced here and sold here in places you wouldn’t even imagine,” said Susan McKenna, who owns the small eatery, Nosh, in downtown San Pedro, and is one of the festival’s creators. “I discovered it at Sunshine Market ten years ago, and as someone who loves sausages of all shapes and sizes, I said: “What is this?” They were incredibly delicious.”
With the 2008 closure of San Pedro’s Sunshine Market – considered one of the best sources in the area to buy a scrumptious čevapčiči with its secret ingredients, two local business owners  teamed up to spark a grassroots effort.
Asking one and all – those who make it at home and local businesses that stretch across Los Angeles to join in – the event is free and will run from 1 to 4:30  p.m. Sunday, Nov. 7, at Angel’s Gate Cultural Center in Building H. Many other happenings will be included, such as artists selling their wares at a holiday boutique.
Susan teamed up with local photographer Slobodan Dimitrov, who wrote a piece after Sunshine closed, called: Where has all the čevapčiči gone?  Their effort means to promote San Pedro  and to reflect its “uniquely Balkan characteristics through its food,” Slobodan said.
“This event is very much to create the iconic San Pedro food festival,” Slobodan explained.  “There are many residents who make them and businesses that sell them. San Pedro needs a signature event. It’s a foodie festival. We want San Pedro to be a destination.”
Many children here grew up on the sausages, the festival creators explained, who were able to score $1,000 from the Coastal Neighborhood Council to launch the program.
Sometimes what makes the sausage so special are ingredients such as garlic and thyme.  No one makes them the same way, one reason that individual countries that consider čevapčiči a staple –“ think there’s are the best,”  including Croatia, Romania, Bulgaria and the Czech Republic. The word comes from Persian language, meaning kabob.
“It’s like crack,“ said Trish Dixon Carpico, a San Pedro resident who grew up on the meat even though she’s Filipino. “We have the old school recipe. I am an established cheer leader of the event,” who added that binding the meat with 7-Up is one secret.
According to Slobodan, the photographer, nearly any milk binder will do the trick.
While two galleries are opening at the same time that day and local artists will sell jewelry, ceramics and paintings, the cevapcici festival clicked right in with the Angels Gate Cultural Center. Irish and modern dancers will also perform at the festival.
Deborah Lewis, Angels Gate’s executive director, said when she heard about the festival idea, she knew immediately it was a match.
“The cultural center is really an outreach of the community and we want people to come up and enjoy it,” Deborah said. “We don’t have a concession stand and it’s part of the culture here. It will be really fun and a good day.”
Admitting to never having tried čevapčiči, the director explained she’s looking forward to it.
“My family is from Switzerland and Germany,” she confided with amusement. “I have sausages in my background.”
Starting out small, the festival operators are asking local business – which include A-1 Market, South Shores Meat Market, Goga International Market, the Whale and Ale and Pavich’s Brick Oven Pizza – to supply the different styles of sausage, which sometimes is made with only two meats; other times with three.
As they are grilled on giant barbecues at the cultural center that overlooks the Pacific ocean, the sausages should tinge the costal winds with a smoky, delicious smell. Lemonade from Nosh and wines from Off the Vine will also be available.
There will be a giant long table to sample the meat.
On hand will also be the traditional condiments that typically go along with the sausage – chopped onions and red pepper – as well as rolls. All the tastes (only for the sausage at the event) will be free this year.
The dream is that the festival will grow into a food, but also an “ethnic event,” said Slobodan, who is part Serbian and part Bulgarian.
“This is the first annual San Pedro Ćevapčići Festival, the photographer said. “What we hope to do (eventually) is like an October Fest where people sit around at long tables and everybody gets together. It will be reminiscent of a Sunday meal at a farm house.”
For more information, call (562) 706 2892.

Posted by theunderdogforkids at 10:14 AM 3 comments: Links to this post