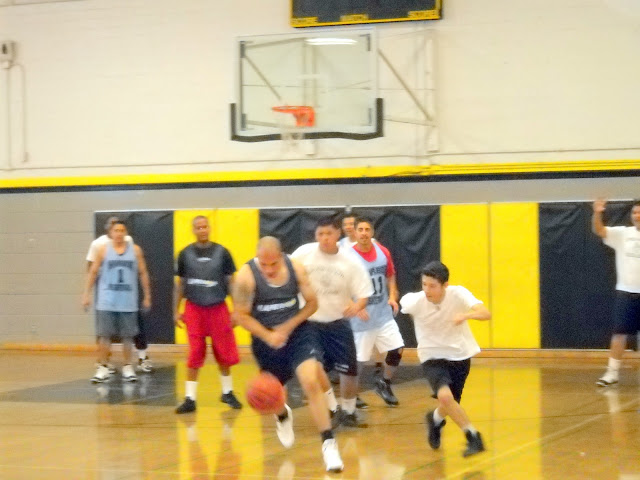 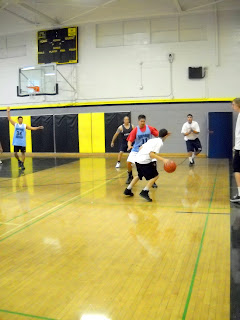 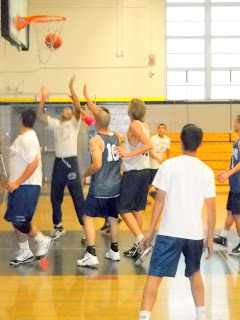 It was a free-wheeling basketball game Friday afternoon dunked with loads of fun as a mix of police academy cadets at San Pedro High whipped up and down the basketball court attempting to defend their turf against Los Angeles police officers.
The only problem was this: the cadets, who are in a small learning community that studies law enforcement,  had never played basketball together and were a mixture of all ages; The Los Angeles police department sent its speedy Harbor Division basketball team, led by police officer Roger Reynoso.
Police won 85 to 51.
The game Friday was a consistent losing streak, but the cadets never gave up and refused an offer to put a few officers on the team to level the playing field. Ironically, San Pedro High basketball player, Sean Zuvich, who came to take pictures for the school year book, first coached the cadets and then offered to play with them –making the entire game that much more spectacular. 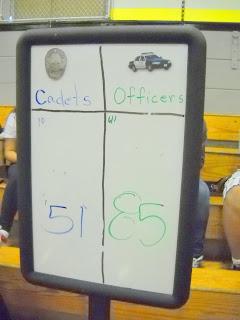 Zuvich dramatically helped the cadets turn up the heat.

“They thought it was really neat they (the officers) came to their school and took time to get to know them,” said Cynthia Deinstein, the LAPD officer who runs the high school’s academy. “They would love to play again.  I thought it was such a great community builder and taking pictures with the cadets always has a lasting impression.”
LAPD Deputy Chief Pat Gannon, who showed up at the event, said he sanctioned the game because he likes building relationships between youth and officers.
“In many cases teenagers have a difficult time seeing police officers as regular people” Gannon said. “Anytime that I have an opportunity to get police officers and teenagers together in a basketball game or any other type of event it helps develop great relationships.  This is good for the kids and the officers.”
The San Pedro Community Outreach Club, dedicated to bringing the students to the community and the community to students, sponsored the event.
Posted by theunderdogforkids at 8:47 PM No comments: Links to this post