THREE YEARS AGO, THE SAN PEDRO SCIENCE CENTER WAS DOOMED TO CLOSE DUE TO INTENSE LAUSD BUDGET CUTS; BUT THANKS TO PARTNERING WITH A NON-PROFIT TO ENHANCE THE SITE, A SCHOOL BOARD MEMBER COMMITTED TO THE PROGRAM AND THE DEPARTMENT OF WATER AND POWER AGREEING TO PAY THE OVERSEER’S SALARY ,THE PLACE IS THRIVING WITH ANIMALS,  GARDENERS, BLOOMS AND VEGGIES


THE LIKES OF LUCY, THE IGUANA, A GOAT NAMED BUTTERCUP AND PEACHES, THE SHETLAND PONY, ARE JUST WAITING FOR THE PUBLIC TO VISIT; IT’S FREE!

The odds that Lucy, the iguana would be safe at home in the San Pedro Science Center looked about as slim as her tail  -- just three years ago.

Same with her friends -- a laundry list of rescued, injured or confiscated animals  – that had come to reside at the center before its threatened demise. It was one of the first places targeted for closure during ugly budget cut battles still ongoing in the Los Angeles Unified School District.


Gone would be the days of goats like Buttercup, Ophelia, the 500 pound sow, and Peaches, the 32-year-old Shetland pony, some of which graced the site and blessed thousands of students with a rare glimpse of something few urbanites see anymore  – farm animals.
But thanks to many partnerships,  LAUSD school board member Richard Vladovic and the many neighbors who rallied to save it, vegetables are flourishing, animals are eating and wildlife officials still have an agricultural oasis to bring animals taken illegally from the wild – including two albino squirrels.

“The district said it’s not viable,” said John Zavalney, an environmental educator, who oversees the entire six-acre plot with five employees and a crew of volunteers. His job includes collaborating with organizations to help the program thrive and survive.  “All the neighbors came to our aid to save it.

Now, “it’s impressive,” Zavalney added about the changes, who has numerous awards for his interest in instructing environmental studies and is involved in many organizations, including Jane Goodall’s Roots and Shoots program.

Life has burst out loudly again at the site, tucked squarely in the heart of a middle class neighborhood in the northern area of San Pedro and next door to Cooper Continuation High School.

Instead of dirt and weeds, turkeys trot across the lawn. Geese cackle out screeches and honks. Stray cats slink around having found a safe haven there. The goats bray. And large turtles dip in and out of ponds.

Monthly Tongva languages classes now take place to keep the native American language alive and the Indians are now a large part of the site’s future – tending to a prayer circle and all the Native plants on the site.
The center’s savior:  collaboration.


“The San Pedro Science Center lost its mission for many years facing drastic budget cuts and enormous pressure to cut back services,” Vladovic said. “Only through these budget cuts were we able to see the Science Center through a collaborative lens and seek partners in the community to renew and reengergize the facility.”
Partnerships, did in fact,  bring life back to the dying site.
The Department of Water and Power agreed to pay  Zavalney’s salary
through the district. Plots of land were opened to schools and other groups to use and grow vegetables (Plots are still available.)

Then there’s the goats.


Barbara Salinda, who keeps her 14-year-old daughter Lynette’s goats at the center,  said she volunteers to care for the roughly ten goats in return to pen Buttercup and Pearl. Finding a home for the creatures, she said, would have  cost her a fortune so the match is perfect. In addition, the volunteer added, she believes it’s imperative that all children should be exposed to ranch life, including her daughter.

“I grew up in a farm in Montana and I was near farm animals,” she said. “It’s so difficult to find any of this in this urban setting.”
Another collaboration landed a refreshing change to

some of the center’s dreary buildings. The interiors went from a drab, chipped and dirty beige to a colorful array of murals done by volunteers, including artists. 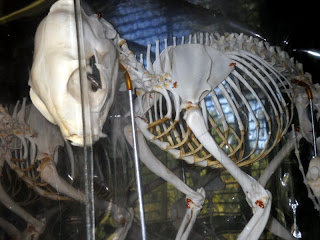 Haik, a Vladovic aide. The non-profit brought in about seventy volunteers in May to repaint interior walls to blues and greens, sandy beiges and earth browns that depict animals such as a snowy owl, bearded dragons and boa snakes.

Money also was a necessity to nurture the once-wilting center.
Vladovic provided about $65,000 for  upgrades such as installing brand new tables and chairs, upgrade the outdated electrical where the reptiles live and add a “smart” board which allows work from a computer to be reflected on a board, similar to a whiteboard, and vice-versa.

Between this facility and LAUSD’s Center for Marine Studies (at the Marine Mammal Care Center), school officials are hoping to spark an interest in science and the environment among its thousands of students and to get their minds “to flourish,” Vladovic explained.

The community is expected to become a “day destination” for thousands of LAUSD students, said David Kooper, Vladovic’s chief of staff, because it will use bus transportation more efficiently and give students another doorway to the  sciences that would have been lost if facility had closed.


“We have a master plan and the center is reinventing itself,” Kooper  explained.


Located at 2201 Barrywood Avenue in San Pedro, the center is open 8 a.m.  to 4:30 Monday through Friday and can be visited by the public at anytime during those hours. Visitors are asked to get permission to feed the animals as many are on a restrictive diet. For more information, call (310)-832-7573.
Posted by theunderdogforkids at 12:35 PM 1 comment: Links to this post