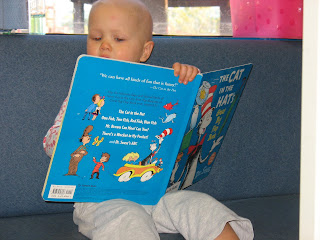 All I Want for Christmas is...
Some Platelets, Red Blood Cells & Bone Marrow 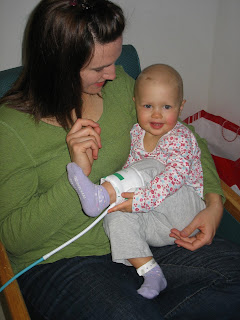 Jillian and mom, Michelle, get the cuff around the ankle to determine her blood pressure. She just wants to kick for exercise, the baby said. 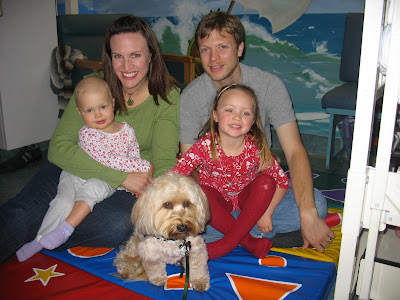 To help this family go to these
links:
http//:www.getswabbed.com;http://www.marrow.org; http://www.memorialcare.org 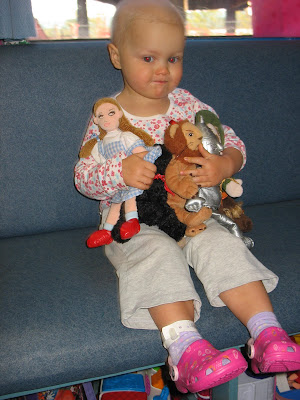 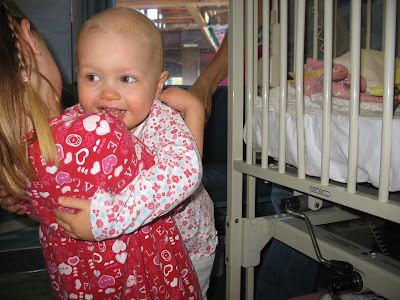 What Does Jillian Need For Christmas – platelets, red blood cells and a bone marrow Donor Will Do

Peeking quietly into the hospital room, it seemed like any normal family gathering. Two little girls, a beaming, blond 4-year-old named, Anna, and her baby sister, 23-month old Jillian flopped on the floor. Toys were scattered about them-- and a visiting dog named, Huxley, happily snatched treats from their tiny hands – making the girls giggle.
Their parents, Michelle and Matt Litton, smiled proudly like it was Christmas morning. But the gifts the parents need this holiday aren’t the usual suspects such as a litany of toys, books and music.
The San Pedro couple desperately need Santa to bring red blood cells, platelets and a matching bone marrow from a willing donor on his sleigh – in case their sweet, impish tot, Jillian, needs it to survive. It was Oct. 3 when the family doctor called and told Michelle that Jillian had leukemia, not just any leukemia, but a rare form called acute myelogenous leukemia. They needed to meet with her right away.
Racing over to Miller Childrens Hospital in Long Beach, Michelle swept in the room to hear the bad news and the cycles of chemotherapy Jillian would need. At last, the family had learned the answer to the disconcerting bruises that had freckled Jillians’ body accompanied with a fever, and later complaints from the tot that her feet and ears hurt.
As for most parents, the first appearance of symptoms seemed like the flu.
“But there were a few weird things, like I sat her down for lunch,” said her father Matt. “She hadn’t eaten anything, but when I picked her up, her stomach was hard as a rock. It felt as tight as a drum.”
Doctors later told them that Jillian’s spleen and liver had swollen – and she couldn’t fight off an ear infection with the antibiotics because of her underlying illness, plunging the couple into a nightmarish whirlwind in learning about leukemia, platelets and bone marrow swabs -- more than anyone would ever care to know.
Ironically, the couple knew more than most would, having already supported St. Jude’s Research Hospital, which specializes in pediatric cancer. For Michelle, those little faces and stories of life-threatening illnesses haunted her so she and her husband registered as bone marrow donors should a need ever arise for any child. She even blasted out an e-mail asking her friends to do the same.
The couple had agreed among themselves to do all of this before they found out about their own daughter – and unfortunately, they are not a match for Jillian.
Parents typically aren’t a match for their own children (even though its genetically driven) and in this case, Anna, is not a match either, Michelle explained. So the hunt is on for someone who is -- and those who take the time to register would be on the list and could be a match for Jillian and hundreds of other children.
“You’d be more of a match than me,” explained Michelle, who now knows more about bone marrow and registering for it then she had ever planned on. Due to the costs, the family and friends have held fundraisers to try to make registration fees cheaper.
Furthermore, ethnicity plays s a large part of the matching, not just DNA, Michelle explained. About 80 percent of the donors are Caucasian, which makes it horrendous to match marrow for other races -- and "so minorities are in high demand and are not required to pay the fee," Michelle said.
From the moment their friends learned of the family's plight, they jumped aboard to try and help.
In my next life, I’m planning to come back and have the Litton’s friends. As soon as their friends heard what was happening to the family, they mobilized pulling together a giant garage sale – raising $5,000 plus during last weekend.
That will be used to help run the upcoming bone marrow drives, one at Torrance High School Dec. 14 from 3 to 9 p.m. and the other Jan. 5 (Saturday) at the Cabrillo Marine Aquarium from 11 to 3 p.m. (For further information, link to the GetSwabbed above).
Their friends helped post fliers every where and anywhere to get people to the bone marrow drives and continued to email me on a consistent basis – that a story should be posted on the Underdog Blog.
Everybody needs friends like that during a life-and-death struggle, but I’m sure it’s not just the parents that they are trying to help. Jillian, herself, is quite a character. I was shocked how much she could speak already – and that she definitely had her own mind-set.
When she wanted to read her Dr. Seus Cat in the Hat book alone – and Anna insisted on helping her – she pushed Anna away saying she wanted to read alone.
On what her parents were calling “a bad day” for Jillian, her spirit seemed tough and her drive constant, despite battling a cough. She watched Wizard of Oz (her favorite movie) in her crib with Anna and when she was asked what her favorite character was, she yelped out: “Toto!”
She jumped around reading books, climbing up on her mom and kissing her, riding her toy pony and then refusing to hug a leaving visitor – that would be me – at the end of the day.
She was tired and the nurses had come in-and-out poking her, checking her blood pressure and her temperature.
Her mom encouraged a hug – but she ignored that and clung onto her buddy friends, Toto, Lion, Dorothy, Tin Man and Scarecrow.
But just as I was leaving, I got blessed, Jillian flung herself on me and gave me a hard, deep hug – one that I never realized a tiny sprout could give.
That was the greatest Christmas gift of my life.
Posted by theunderdogforkids at 1:19 PM 14 comments: Links to this post