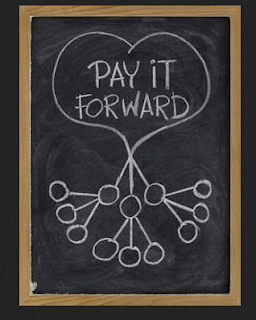 A couple of weeks back, my family was having a small reunion at Acapulco for lunch when we spotted a group of men, probably in their 20s and 30s, enjoying beer and margaritas and generally having a good time.

One was leaving about the same time as us and said:  "Have a great day" as he started to put his helmet on and get on his motorcycle. But when he spotted us getting into my sister Leslie's jeep, he flagged our group. "I saw this when I rode up and parked here," he pointed to a well-deflated tire on the right front passenger side.

None us had any idea. We celebrated  that Leslie and her son, Chris, had made it safely off the freeway from  San Diego to San Pedro that day. With plans to return the following morning, Chris helped her fill up the tire, but it slowly leaked on the way home. When Leslie rolled into a gas station in San Diego on Monday, there was further bad news -- but good fortune because of our brief friend.

Every tire on her car was bald. Being under an enormous amount of stress  with work, my sister missed it. All of us felt indebted  that  a man took a few seconds  to warn us and by doing so, possibly saved lives.  I thought of him frequently afterward and how such a minuscule seeming suggestion became a lifesaver.

It stayed with me for awhile, before I found my own great opportunity to pay it forward. Sitting at my doctor's office, an elderly, distressed woman in a wheel chair rolled in with her young caretaker. The woman was next to tears trying to get in to see Dr. Anna Mellor that day in Torrance.

"She's back to back patients," the check in woman said.

"But I am so sick," the woman cried. "I really need to see my doctor."

"There isn't anything open," the hospital clerk said politely. "There's nothing I can do. I am so sorry."

My appointment was  with the same doctor in the next few  minutes. I had already been checked in and was there to double check on some health issues, but there wasn't as much urgency to it as there was for this patient.  I felt terrible how upset she was and understood her emotions well. During times I've been extremely ill, I've only wanted to see my family doctor because she is kind and caring and understands my history.

"Wait," I said to the two women running the desk. "If it works, I can give this woman my appointment."

The two clerks were stunned and pleased, both giving me smiles. The woman and her caregiver were also grateful, thanking me. They didn't need to thank me really. I was just paying it forward as the motorcyclist had done. It's especially important that we do this now. The times seem devastating, from still trying to pullout from a deep and dark recession to our government shutting down embarrassing many citizens of America, we need this breath of fresh air, these strokes of kindness. I won't even get into the horrific mass shootings across our nation.

A woman on the news carried a sign for our politicians: "You are breaking America's heart." I couldn't have agreed more.

What we need right now  is exactly  this type of healing, this type of journey because we are all on it together.  Paying it forward  reminds us that humanity still has goodness in its soul. And that's exactly the reminder that the parents of Alyssa Josephine O'Neill's parents gave us when they touched off an international and viral movement in regards to their daughter's death.

Their 18-year-old daughter, who suffered from epilepsy and was diagnosed in 2012, texted her mom  on Sept. 3 that she wanted a pumpkin spice latte from Starbucks. Before her mother had a chance to grant her daughter's wish, Alyssa had an epileptic seizure and died on Sept.  4. She didn't get the chance to delight in the sweet drink.

Devastated, her parents, Jason and Sarah, felt lost as to what to do. Heartsick, they  visited their nearby Starbucks in Erie, Pa. in honor of their daughter's memory.

They wanted to do something so they shared  her last request. They bought pumpkin spice lattes for 40 other people, according, to various news accounts. All the couple asked for was that their daughter's initials, #AJO, be written on the cups in her favorite color -- purple.

In response, the Starbucks manager decided to pass out 50 more free lattes to customers with the AJO brand and the gifts from the heart exploded across the internet after customers started asking the baristas what it was all about. The baristas directed them to Alyssa's Facebook page.

The compassion went global from there with people picking up restaurant bills, stamping #AJO all over the place to help spread the word about epilepsy impacting 6.5 million people worldwide Even an elementary school boy bought books for children at his school who couldn't afford them  -- in honor of #AJO. 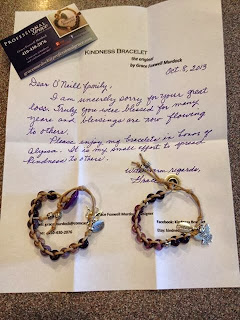 Sending the family two kindness bracelets, a woman's handwritten note on the Facebook page said: "Dear O'Neill family, I am sincerely sorry for your great loss.Truly you were blessed for many years and blessings are now flowing to others. Please wear my bracelets in honor of Alyssa. It is my small effort to spread kindness to others.With warm regards, Grace."

Pay it forward doesn't have to be about money or picking up some one's tab. It can be a small gesture like opening a door for someone or letting someone in a lane. It can be a handwritten note left on a car telling a person to have a good day or buying some candy for kids at a store when they are short changed. It can even be kind compliments. There can never be enough of those. When the world feels dark, these actions can make us feel there is still light out there, somewhere just waiting for us.

If we do these things, we can share #AJO for years to come and remember that goodness can still reign in our hearts and with those that join us. 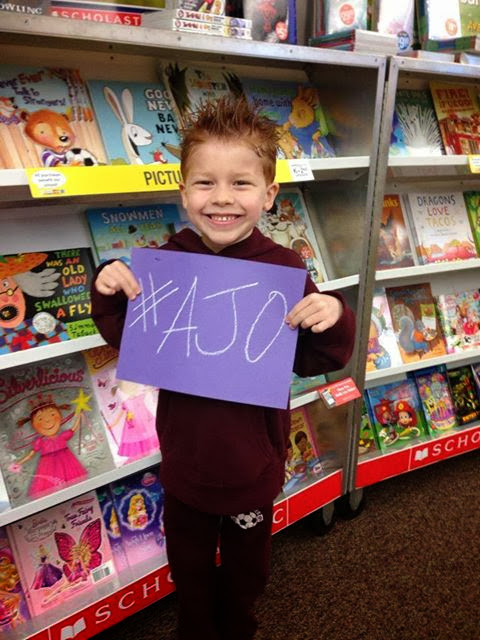 Posted by theunderdogforkids at 6:55 PM No comments: Links to this post