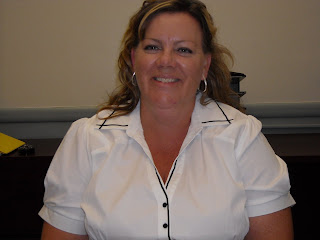 In a Short Stop-over at the Local School, Jeanette Stevens Will Bid Adieu to Her Former Staff and Students at John Leicthy Middle School Next Week and Will Return To Stay at San Pedro in Mid-August;

Her Main Goals Includes Helping Students Define Their Skills, Their Identities and – Their Futures – and Yes, They Should be Taught How to Stand Up For Their Rights at the Correct Time and Place

Coming from creating a progressive and entirely new middle school campus in downtown Los Angeles – a school she and her team built from the ground up, Jeanette Stevens stopped on her first short day at San Pedro High School, greeting summer school students and shaking hands with a handful of staff.


The spunky, 41-year-old San Pedro resident – having already read the school’s dismal accreditation report – reassured the community that “we are going to be O.K.” and that she will work closely with lead teachers to improve academics, channel students interest at the school and make sure they leave prepared for their futures.

“We are going to make it work and it’s an exciting time to do that,” Stevens explained, whose father and grandmother both attended San Pedro High. “I’ve read the accreditation reports and the test scores, but I know there are good, dedicated people here. Our students will walk out of here in four years with the tools that they need and we will be well prepared to make that happen.


“We are going to work on building a team and our goal will be focused on our students.” With a team effort, Stevens -- who appears to have a refreshing approach when it comes to education and who has headed two of Los Angeles inner-city middle schools – tried out new tactics and reform to get both students and parents involved with their campus, which was divided into four small learning communities.

Students were considered like family and embraced into the culture, so they felt comfortable in a mass of 3,000 students.

During a two hour interview, Stevens talked incessantly about students and their needs and is the third principal courageous enough to take up the reigns of San Pedro High in less than three years.

Hard economic times for the district and the worst year in her profession was last year, Stevens said, when 75 percent of her Leichty teaching staff faced dismissal due to budget cuts. Students, angered by the potential loss of their teaches, were allowed to protest in a variety of ways from tying pink ribbons to the school fences and “chalk-talk” where students were allowed to write their feelings on the campus grounds, she said. Teachers were also encouraged to hold classroom discussions.


However, when a band of students stood up during their eighth grade graduation ceremony in June and turned their back on the guest speaker – an interruption of LAUSD School Board President Monica Garcia – Stevens said the moment was “confusing” and brought Garcia’s speech to an abrupt halt.


At first, Stevens explained, she and Garcia both thought a student was sick or that some other emergency had happened. After the event, the students who were part of the protest, were asked to explain their actions before receiving their certificates in the following days. Some agreed to write apologies to Garcia, she said.

The students were angry with Garcia for voting for the cuts. However, Garcia was a “friend” of the school’s and was responsible for bringing many gifts to the campus, such as Astroturf for campus’ year round soccer club, Stevens said.


“When it’s your turn to shine,” Stevens said about the event, “turn the light on. It was really unexpected. It was a time to celebrate and the kids missed their chance to shine. If they weren’t happy and they told me, I could have gotten a different guest speaker.


“I felt really bad that the students felt that way and that somewhere along the line, we hadn’t done our job.”


Despite the controversy, Linda Del Cueto who heads the region in which San Pedro High resides, hand-picked Stevens for the job. She was impressed with Steven’s progressive ideas and sharp abilities to roll out successful collaborations repeatedly.


For the past several years, San Pedro High has had difficulties keeping its leadership in tact, suffered from extensive overcrowding issues and a received a poor accreditation report that some educators consider similar to getting a D grade.


Steven’s extensive math background, her ability to start a new school from the ground up and lead another inner-city middle school, Del Cueto said, made her a prime target for the job.
She was also encouraged that Stevens lived in San Pedro and understood many of the issues the community and the high school face, including an annex campus being built at Fort MacArthur’s Upper Reservation at Angel’s Gate.


It was an unusual move to reassign a principal from another district region, but Del Cueto believed the campus needed someone more invested in the community and was pleased that Stevens two young girls attended Park Western Avenue Elementary School.


“Superintendent Ramon Cortines agreed with me she’d be a perfect fit for San Pedro High,” Del Cueto explained. “I knew of her work at two schools and some of her experiences you couldn’t find anywhere. She’s a true collaborator. She brings out the best in people and she motivates.”
Stevens replaces Bob DiPietro, who retired after two years due to family issues, but not before admitting that he was frustrated with the campus entrenchment making it difficult to make changes.


However, Stevens goal to clean up San Pedro High, she said, are personal as well professional as she wants both her daughters, Teel, a 6-year-old first grader, and Taylor, 8, a third grader, to attend the high school.


The new principal said her philosophy circles around her students, their needs and what they desire to be provided for their futures, including college.

As the leader of a brand new middle school, in the Pico Rivera District, where poverty was often a way of life, her team, two-thirds full of brand new teachers, believed their job was to help students find their identity and a place where they fit into the large campus of 3,000 students.


To do so, they broke the school into four mini-campuses and named all of them after sharks. Students kept the same teams of teachers to work with through 6th and 7th grade children to help them form bonds with the school’s adults. By 8th grade, they added new teachers to give the students an idea of the workings of high school, she said.


The students responded favorably to their houses – nicknamed Silver Tip, Mako, Spear Tooth and Blue, and helped pull together the identity of each house – which was more culturally driven then academic so the students could fit into the structure of such a large middle school. Each campus, Stevens said, was expected to operate “like a family.”


Also a big proponent of having an extremely active after school program, Stevens ran assorted clubs from a year round soccer club to photography at Leichty to keep kids at school and in safe environment .


About 250 students attended after school and the program was growing.


Stevens attended Mary Star High School and moved to San Pedro when she married about 20 years ago. She began her career as a math teacher at Gomper’s Middle School in 1990 and continued up the ladder, first as an assistant principal, before landing the principal role at Berendo Middle School.


She was then sought after to start the brand new school, Leichty, and she brought along six of her teachers who were interested in making big reforms and starting from scratch. Asked if it wouldn’t be hard to work with entrenched teachers – since most of her teachers at Leichty were new instructors – Stevens said her experiences at Berendo gave her ample opportunity to understand how LAUSD and public schools operate.

Now on her eighth year as a top school administrator, Stevens was Berendo's principal for five years and assistant principal for three.


At Leichty, her teaching team was able to work up a vision – which included making the students understand they are part of a family – and the new teachers that came aboard knew the school was based on “what the kids need.”


“I’ve definitely have experience in terms of leading and I feel I’m connected to the (San Pedro) community,” Stevens explained, as teachers rapped on the main office door eager to meet her. “We need our parents to come back and support us. And we have to acknowledge that there’s growth here. Teachers come here and work hard daily.