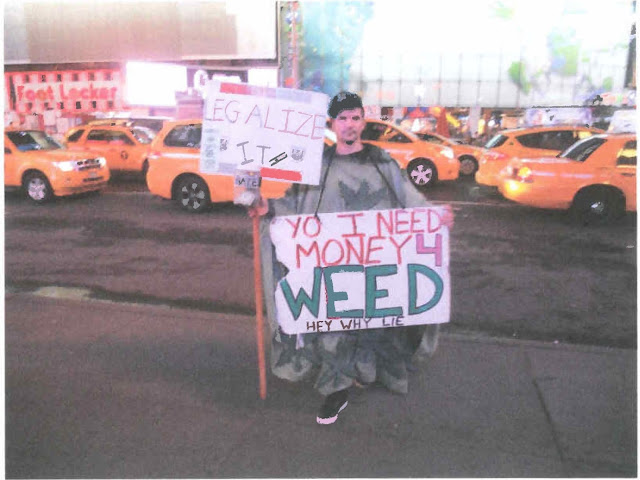 A San Pedro 8th Grader on a School Trip to New York and D.C. Gets An Ugly Dose of Reality When Taking a Photo of a Homeless Man


It was our last night in New York City and my friends and I just saw the Broadway play,
Spiderman. After the play, we took a group photo in Times Square and were allowed to browse and walk around in groups of at least two since we were on a school trip. My cousin and I walked around for  20 minutes and decided to make our way back to our group's meeting place.

We stopped off at Oakley, the high end sun glass place, and had just walked out when we saw this man parading about, saying: "Pictures for tips!! Pictures for tips! Tips only, no free pictures!" His voice wasn't too jolly, and he was probably high at the time.
I pulled out my camera and snapped a quick photo, not really thinking it would be a big deal, and right after I heard a loud and angry "HEYYYY!" My heart pounded and I became terrified. I didn't even have to look up as I knew exactly who it was. This guy came running up to me and began speaking in a very vulgar and rude tone, hurling different curse words at me, but from what I heard, he pretty much said:
"Hey what the **** man! I said tips if you wanna' take a picture! You're lucky I don't **** slap you right now!"
I panicked and responded, "Ok, I-I'll delete it."
"Naw, that's not the point man," he shouted continuing his barrage of threats  with violent cuss words.
I didn't know yet about a similar situation back home in Hollywood where a 23-year-old woman was killed for taking such a photo.
I again told the cussing man I would delete it, and I fumbled with my camera trying to find the delete despite my nonstop trembling fingers, actually nonstop trembling body. My cousin said: "Let's leave quick," and we walked fast and away from him. He kept shouting but I was too scared to hear him. I had never been threatened that way in my life. Nothing happened, which I am grateful for, because I didn't know what this man was capable of or what he had under his marijuana costume, as in weapons, knives or guns. For the next ten minutes, my cousin and I reflected on what could have happened and were still in a shock.
Later that night, we ended up laughing about it.
Ok, maybe it wasn't the best idea to take a picture of a marijuana smoking homeless man, but I do believe that nowadays people will do anything for money, even if it means mugging two 14-year-olds. I do understand that this could possibly be invasion of privacy, but actually he was indeed asking people to take pictures of him publicly.
I agree I'm a bit naive. I had just culminated from the 8th grade earlier in the month, and as my graduation present my parents allowed me to go on the annual Washington D.C. Trip that takes place in the 8th grade Dodson Magnet Program. We went to D.C., Gettysburg, Philadelphia, and the Big Apple, New York. The trip was great and I'm glad I had the experience to see the east coast, especially New York. Times Square was just electrifying at night time, it literally took your breath away just looking up at all the lights, stores, and skyscrapers.
The only thing I didn't like about New York was that it's all about money. Salesmen and women are always trying to bargain and cheat you out of it. The worst, though, is all the panhandlers asking for change. They parade around the sidewalks, smelly, rudely, and just overall arrogantly. Now, I always try to go by that saying, don't judge a book by its cover, and I usually don't judge people because of an unfortunate encounter with one person. But those threats made me scared and angry.
I also didn't know  such an encounter could turn deadly.
After I arrived back into California and told my family all about the trip, showed all the pictures, and adjusted back to the West Coast, my mom showed me the article about a young woman who was killed in the Hollywood incident in June that started out very similar to mine.
Christina Calderon of Lynwood was near the intersection of Hollywood Boulevard and Highland Avenue where three men were panhandling.  She took pictures of the homeless men who were holding signs with obscenities and vulgar messages on it, asking for money for a picture. The woman did not pay money and just took a picture. She was attacked and fatally stabbed. As I read what happened, I realized how similar our situations were. Except, I was not physically attacked. It's sad to say that I feel "lucky" to not have been hurt or killed over a photo.
This was indeed a lesson learned. I suggest to everybody that if you see a homeless person holding a sign or asking for money to take a picture, that you walk right past them. A quick little picture could lead to an argument, a confrontation, or unfortunately even death.
That  is not worth any picture.
Posted by theunderdogforkids at 9:40 AM No comments: Links to this post