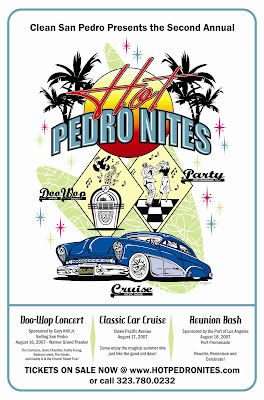 Mr. Clean San Pedro continues to wipe down San Pedro to make it sparkle -- and now his entire team need our support.

This can be done by simply attending his second annual "Hot Pedro Nites" over a three day period which will host a Doo-Wop Concert, a classic car cruise and a reunion bash running from Aug. 16 to Aug. 18.

All proceeds will go to supporting Steve Kleinjan's efforts through the non-profit group he began -- Clean San Pedro --where a team of volunteers and himself clean up parts of the town every month one piece at a time. He also hired an employee to routinely clean the streets of San Pedro who putters around town in a little yellow-and-white Clean San Pedro golf cart.
Tickets can be purchased at http://www.hotpedronites.com/ or calling (323)780-0232.
----DON'T FORGET THE DOGS WHO DIED FOR US...
One of my favorite gals in town, Dorothy Matich, is at it again to restore the vandalized canine cemetery at Ft. MacArthur where guard dogs who served during the Cold War are buried. A tea will be held to earn proceeds for the project.
Vandals ripped up cemetery markers, trashed the grave sites and knocked down parts of fencing. Over the years, the cemetery has taken so many hits, visitors can no longer tell its a graveyard and picnic in the area.
Attempting to save this "historic treasure," as Dorothy calls it, a tea will be held Thursday, Aug. 23, at 12:30 p.m. at MaGriffe, 3624 S. Gaffey at a cost of $25. For more information, please call (310) 831-2803.
All proceeds will be used to rebuild the cemetery through the Ft. MacArthur Museum where dogs like Baron, Cheetah and Pancho are buried. The refurbishment is expected to cost around $25,000.
Posted by theunderdogforkids at 6:51 AM No comments: Links to this post 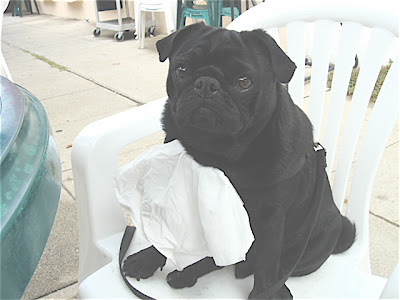 DON'T YOU WISH YOUR KID WAS THIS WELL BEHAVED????????
Meet Buddy-Love, a 3-year-old Pug who can be seen dining about San Pedro when his owner takes him out for breakfast. He puts his napkin on. He doesn't bark. He doesn't eat until he's told too. He's never rude. In fact, he's polite and mannerly.
Buddy- Love's owner, Shaune Ann Feuz, took this photo as scores of people walked by and stared at this canine's remarkable self-control -- to wait until he's told: "You can now have your bacon."
--Diana

Posted by theunderdogforkids at 6:36 AM No comments: Links to this post