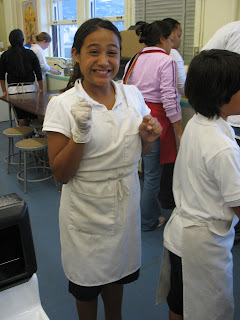 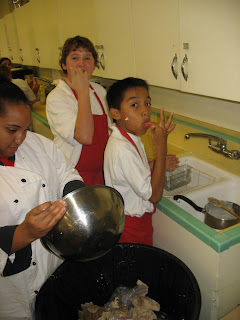 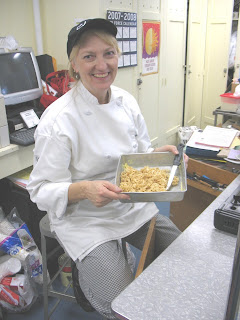 San Pedro High Culinary Teacher Sandy Wood, above, even helped teach Dana Middle School students how to cook during an after school cooking club.
Posted by theunderdogforkids at 10:22 PM No comments: Links to this post

A GREAT CULINARY TEACHER – WHO LED HUNDREDS OF STUDENTS OVER A DECADE TO PULL OUT THE DISHES, THE SPATULAS AND WHIP UP MEALS DECIDES TO HANG UP HER CHEF’S HAT AT SAN PEDRO HIGH SCHOOL; HER DEPARTURE WILL DEVASTATE SCORES OF KIDS WHO PLANNED ON ATTENDING HER CLASS

SANDY WOOD ALWAYS HAD DOZENS OF STUDENTS ON HER WAITING LIST, AND THE CAMPUS MAY NOT FILL HER POST DESPITE ITS POPULARITY; “IT WAS TIME,” THE TEACHER SAID HAVING TAUGHT THERE SINCE 1999 WITH A TEACHING CAREER SPANNING MORE THAN TWO DECADES

It’s nearly as bad as losing the principal.

With often 500 students on her waiting list, San Pedro High School’s culinary teacher, Sandy Wood, 59, decided it’s time to pull off the whites, tuck away her aprons, put away the dishes and the dish towels and to start cooking more at home.

It was time to retire, the teacher said.

Campus officials fear – during these turbulent economic times – that her post will not be filled. The position –without the nation’s financial economic turmoil—remains difficult to fill in any case due to the sparse selection of high school culinary teachers -- even though the culinary field remains one of the largest growing industries in the nation.

“It’s been wonderful,” Sandy explained during a phone interview. “I’ll be 60 in September and it just seemed the right time. I will definitely miss all the kids. But I’ll still be in town…so I’ll be able to visit.”

Unfortunately, the skillful teacher who could whip up anything in a skillet, was truly regarded as one of the school’s best teachers – not just in her cooking skills – but in the way she cared for her students.

One day recently on Sixth Street downtown, the teacher was walking up the street when a teenager shouted out the window: “Is that Sandy Wood? She was one of the best teachers I ever had!”

After serving the high school since 1999 – and having a teaching career for 24 years where batches of students whisked through her doors – she often found herself turning around students whose futures appeared bleak.

Hector – a fake name she gave one of her students so she could share his story with the crowd when she received a recognition award from the San Pedro Chamber of Commerce in May – arrived in class his senior year, with no interest in school or apparently in much of anything. But cooking made him spark to life – and enflamed his spirit.

Noticing his interest, the culinary teacher was able to stir (steer him) toward culinary school where he later graduated.

“He came into my class as a senior he was just looking at getting by, getting through. But then we started to cook,” she wrote. “ And Hector was hooked. He now had a reason to come to school and a reason to do well. He could not get enough. He filled out an application, wrote an essay, got letters of recommendation and was accepted into a cooking competition!

“He stayed after school almost every day for weeks to practice. He won a scholarship to a culinary school in New England! But leaving San Pedro was not something his family had ever considered. We talked and talked. After working a year to earn living expenses, Hector got on a plane for the first time and headed to the other side of the country. He called me after a week or so and said: “There are no Mexicans here!’ I told him: ‘There are now!’

“Hector graduated from culinary school. He did well. I have seen many Hectors, and Lisas, and Matthews, and Jennifers. I have seen the fire move from the stovetop into their hearts. That’s why I teach.”

The San Pedro High School Lady Boosters Club – a financial backbone to aiding the school, also named Sandy teacher of the year along with Don Hughs, an art and play production teacher.

The culinary teacher began studying at UC Davis, where she graduated with a bachelor of science degree in home economics. She received her teaching credential at Sacramento State University and began teaching in Sacramento before moving to teach English at Atwater High School.

Her departure comes at the same time as San Pedro High Principal Bob DiPietro, who took the reins to lead the campus less than two years ago and opted to step down due to a family crises.

Most consider the culinary teacher’s departure a shame for a campus that’s already in the mist of the tackling scores of problems, from scaling back the overflowing campus to working on returning its threatened accreditation status.

There are just too many Hectors, so many parents are hoping Sandy’s post will be filled.

Posted by theunderdogforkids at 10:14 PM No comments: Links to this post