IMMIGRANT STUDENTS TELL OF THEIR PARENTS TREMENDOUS HARDSHIPS TO PAVE BETTER LIVES FOR THEIR CHILDREN; MORE POSTINGS TO COME OF THESE REMARKABLE STORIES WE RARELY HEAR

Dear Readers: This summer while I was coaching Boys and Girls Club students in writing, I was shocked not only by the high caliber of students I had, but the fact that their gratitude to their parents for making their lives better was unwavering. It moved me deeply how grateful these students were and that -- of course -- we don't tend to hear these stories. We hear about the gang parents, the drug dealing parents, but not the immigrant parents who have come here and given their children a strong sense of values and work ethic. -- Diana

Look for more of their stories this week. Here is one:

Death scares most people, but it goes beyond that point. My mother can tell you. She saw her only son in her arms leaving her. She cried and cried until the point where no more tears could be shed.

I was 6-months-old and my heart stopped functioning. My mother kept on screaming, “Wake up, wake up!” My father sped passed the red, bright lights trying to reach the hospital as fast as he could. Every minute, was a minute lost.

"If you are going to take him, take him now." Those were the thoughts inside my father’s mind as we reached the emergency room. As they walked into the hospital, for a moment, I was revived and my mother saw a sign of hope. She ran towards the front desk and begged them to take me in.

All they said was to wait and that there was nothing wrong with me. When the nurse said that, I began to fall a victim to death. My mother began to scream more until the doctors pulled me from her arms and took me into intensive care.

Now it was all in God’s hand. I was let go after two weeks and doctors informed my mother this could occur again. When I was told this, I realized that not many get a second chance at life. I should know. I was given the chance to live, but a brother was not.

In September 1992, my mother was expecting another son; I was just turning one. She started to feel pain, and began to lose her balance. When my father returned home, he raced her to the clinic. The doctor looked at my mother and told her the son she was expecting would not survive. The reason: his heart had stopped.

My mom experienced a miscarriage and that ended a brother’s life without ever seeing the world. My mother did not know why all this was happening. I had been saved, but he did not face the same fate. My grandmother also currently is tacking a heart condition.

These experiences have motivated me to keep going. No obstacle can be seen as a defeat. They must be conquered. Life would not be life without them. My parents have given me the support and values to go on. I will always aim for success because failure does not exist in my world. Life has been tough, but I manage to get through it. I strive to do my best -- and be the best.

Some would have expected me to fall to society’s ruins. That is not an option. My parents did not work their entire life for me to throw it away. Later in life, I might encounter obstacles that are more difficult. The fact of the matter is that life has taught me that quitting never gets you anywhere. You have to face the problem head on, to find a solution. I am a son, a brother, a man.
Life has shown me my path. I will not let it go to waste. This in not only a personal goal, but a goal for my family and community. I want to help others realize that obstacles can become victories. I am committed to my goals. These experiences have shaped my path to establish a career as a cardiac surgeon. I want to give those in need the helping hand that was given to me.
Posted by theunderdogforkids at 8:14 PM No comments: Links to this post 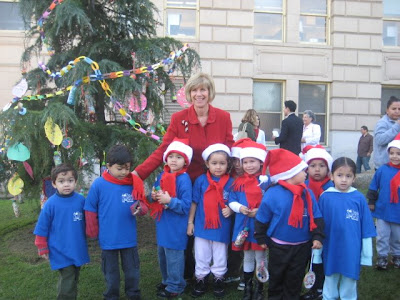 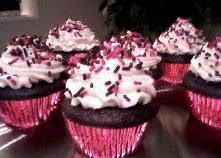 OK, THE LOS ANGELES COUNCILWOMAN GOT MY HEART THIS TIME: STAFF SENT A HOLIDAY PHOTO of JANICE HAHN AND DARLING BARTON HILL ELEMENTARY AND 15th STREET FAMILY LITERACY STUDENTS FOR A TREE LIGHTING CEREMONY AND I COULDN'T RESIST POSTING IT; HAPPY HOLIDAYS !!!!! AND DON'T FORGET THE FIRST THURSDAY CUPCAKE AND MACAROON QUEENS DEBUT AT NOSH EATERY THIS WEEK; A Mouthful of Surprises
Finally! Cupcakes in San Pedro! And now there will be macaroons too!
From 6 to 9 .m. Dec. 4, this Thursday, stop off at Nosh and try some of these delicious treats. Nosh is located at 617 S. Centre Street in San Pedro.
As you know, I've written many times now about my friend Rose Cigliano starting a cupcake rage here in the South Bay with her scrumptious pumpkin with cream cheese frosting along with red velvet cupcakes (not to mention the many other kinds she has) that will slide warmly down your throat. Come in and taste these treats and order for your holiday needs. You can visit her website @ http://www.italiancuppacakes.com/. or order through Nosh.
But don't forget about those macaroons.
Michelle Sanders, who came aboard Nosh to manage the kitchen, will debut her macaroons, which she has served at weddings and baby showers., the same evening The 2008 Cordon Bleu graduate started working with Susan McKenna, owner of Nosh, about six weeks ago, agreeing to help manage the kitchen.
Michelle has ten different flavors of macaroons that can be served for the holidays, including lemon vanilla and chocolate.
While she lives in Carson and was working in restaurants such as Providence in Los Angeles and La Mill Coffee in Silver Lake, her San Pedro boyfriend wanted her to try Nosh. "I just started talking to Susan and it just happened (to come aboard) at the right time. It's been fun learning the way she prepares food."
Posted by theunderdogforkids at 6:40 PM No comments: Links to this post