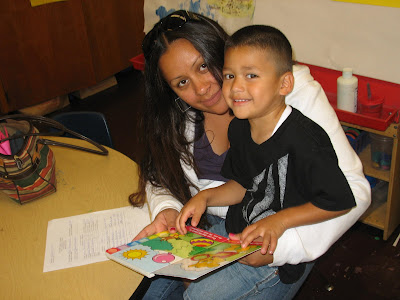 FAMILY LITERACY: ONE SURE FIRE WAY TO GET KIDS AND PARENTS TO READ TOGETHER AND LEARN AT THE SAME TIME!!!!
By Diana L. Chapman

The four-year-old, Adan Hernandez, at first, was delighted to see me. His face beamed as I talked and took their photos. But as the minutes ticked by, he became increasingly fidgety and tugged at his mom’s arm to steer her away while we were talking.

Mayre (pronounced Marie) Hernandez grabbed her little guy’s hand and scrambled out the preschool’s door to play hula hoops – but not before she had read her son several children’s stories while he was tucked tightly in the warm curve of her lap.

“This is our time,” repeated slowly through my head again and again.

The Family Literacy program – the one I was just witnessing and the same program that San Pedro resident Annette Ciketic had prodded me repeatedly to write about for years – brims with success stories and does something that many of us already know – young kids, from babies on up, need someone to read to them early on -- preferably their parents -- who are their first teachers.

This can be a hard calling for parents with several children, more than one job to survive or a single mom or dad raising children on their own – many of whom do not know how to read well themselves or have achieved a high school degree. Family literacy – taught at 15th Street Elementary School in San Pedro and Meyler Adult and Family Learning Center in the Harbor Gateway – focuses on a family learning: together.

Learning English, raising your kids, improving math skills and conquering first an 8th grade diploma and later a GED (general education diploma) sounds like a monster of mountains to overcome – especially for those coming from another culture. And it's been difficult to promote the program.

My true confession: The words Family Literacy made me fall asleep until
15th Street Elementary School coordinator Connie McCosker opened the doors widely and allowed me to peer inside. What I witnessed made me immediately regret that I had not reported on this program sooner

It was nearly as impressive as a blue butterfly spreading its wings before your eyes – because that’s exactly what’s happening to these families.

Once the doors of the program were open – in one room, I spotted parents studying English while their young kids, from infants to toddlers, played in a nearby area where another adult watched over them.

In another room, parents were studying math as a small two-year-old wandered behind her mom.

And in my favorite room, the preschool, a myriad of mothers – and even one father! – had their children climbing on their laps as their parents read to them either in Spanish or English.

“The problem is always what to do with the children,” explained Connie who said the expense of child care was one of the biggest obstacles to immigrant parents learning English and trying to achieve a higher education. “So we teach the parents and the kids. When the parents enroll their kids, they’ll know the school and they’ll have more confidence.”

Where else can you find a brochure that says: Adult Education: “Babies Welcome in Class!” Parents can study English, math and earn an eighth grade diploma and all the while learn to work with their children in the preschool.

Parents who enroll their children must participate in the preschool program where a chunk of time is devoted to the learning to read and play with their child.

The students must commit 20 hours a week to enroll, Connie explained.

One fascinating appeal to parents is so many rarely had a chance to enjoy their childhood and often were already working at a young age that they are actually having a shot at reliving their childhood with their own kid. At the same time, they are learning parenting techniques.

“One young mother didn’t even know how to do a puzzle,” said Maria Young, who runs the preschool program. “She had never done a puzzle in her life. She learned with her child.

“We teach the parents here to make encouraging and positive remarks about their children’s work.”

Besides teaching the preschool kids art, music, colors and numbers, Maria also trains parents how to control to their child’s temper tantrums and the best nutrition for kids.

For mother Maria Espinoza, who attends with her son Jason, 4, the program was a godsend.

When she arrived at 15th Street Elementary, she spoke no English. Since then, she had all of her boys attend the program (the other two are now five and seven and attend 15th Street Elementary) and later was hired by the school to help supervise on the yard. Meanwhile, she pursues studies to obtain her high school equivalency

“The goal was for me to learn English,” the mother explained, but so impressed was the Maria with the program that she ushered each of her children through. “My sons learned English here. They learned to share here. They know and understand the rules. At home, I wouldn’t even show them how to cut with scissors. I always thought it was too dangerous. At home we didn’t play a lot.”

That changed, she said, “and I am so grateful for the program.”

Her sentiments were echoed by Adan’s mother who said her biggest regret was she didn’t know the program existed and didn’t have the chance to do it with her other three sons, 6, 8 and 10-years-old. However, it turned out to work perfectly for Adan who now gets his own time with his mother – where at home he’s always competing with attention with the other boys.

Once Mayre decided to pursue a higher education after not going to school for 12 years – and is working to get her GED – she immediately hit her first obstacle. How would she take care of Adan when child care was so expensive and go to school? Then, she saw a sign on the school fence about Family Literacy and jumped in, starting this year.

“I just love this program,” Mayre gushed with appreciation.. “I’m right next door to where my son is. We’ve gone on field trips. We play together. And I’m getting to where I need to be.”

Now I regret not listening to Anette who coordinates the program at Meyler. The brainchild of educator, Camilla Townsend, who now is the executive director of the San Pedro Chamber of Commerce, Family Literacy has the chance to expand across the South Bay since it began six years ago.
“These past two years Connie and I have been working very closely to act as a "united front" under the umbrella of Harbor Community Adult School,” Annette explained.. “My goal is that we expand to other areas and serve as models and mentors to other developing family literacy programs in the whole South Bay.”
My hope is that we don’t wait too long to promote and explore this program and that our Neighborhood Councils will help sponsor it financially. It can only do one thing for all of us: propel healthier, educated families to become a part of our community – where we will witness children spread their wings as beautiful as a blue butterfly.
The program resumes Sept. 2. Starting that date, Connie of 15th Street can be reached at : 310-995-3125 and Annette can be reached at (310) 320-2419 in regards to the Meyler site. Further information can also be provided at Harbor Community Adult School: main campus 310-547-4425.
Posted by theunderdogforkids at 11:07 AM 1 comment: Links to this post