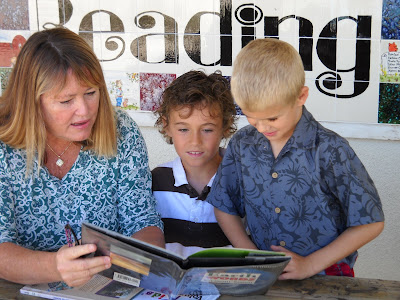 WITH GIGANTIC BUDGET CUTS IN LAUSD, TWO SECOND GRADERS AT SAN PEDRO TAPER ELEMENTARY SCHOOL START A MISSION TO FIRST RESCUE THEIR TEACHER AND NOW THE SCHOOL LIBRARIAN WHO TEARS WHEN SHE THINKS ABOUT WHAT THEY ARE TRYING TO DO;

When the two students first heard their adored second grade teacher’s job was on the chopping block, students Jake Brusick and Ian Renn – like super heroes -- started their rescue mission.

Believing that Debbie Cornell was one of the best instructors ever, the twosome sidled up to their principal and asked what she thought: Would it be OK to start a school-wide recycling program, give the money to LAUSD to save their teacher’s job?

Delighted by their ingenuity, Principal Doreen Steinbach told them to go for it.

Later, the boys learned their teacher’s job was safe, but were horrified to discover their beloved librarian -- who has served at Taper Avenue Elementary School for 16 years -- was next to go. So they shifted their focus.

When I first heard about these two heroes, I couldn’t wait to meet them; they were exactly what I expected. Eager to talk. Brimming with ideas. And reality isn’t going to stop them.

“I just can’t imagine not having any books,” said Jake, 8, as he raced out of the library with Ian alongside after visiting the librarian Laurie Pisano.

Now with a school wide recycle program – having only raised $91 thus far with 38 trash bags full of plastic bottles and cans – it looks unlikely that their plan will save the full-time post. The librarian, noted for her caring, runs top-notch program during school time, also opens s before and after school to ensure that her students learn to read.

Jake – the mastermind – and Ian – who makes sure they get things done, such as school announcements – aren’t giving up no matter how far behind they seem.

“We are going to try as hard as we can,” said a curly-haired Jake . “We tell the other kids, just bring it in guys.”

“We are helping the school,” Ian added. “We have 665 kids in this school and if everyone does their part, we might make it.”

The librarian can’t hold back her tears when she just thinks about the boys trying to save her position and calls them frequent visitors to her store hold of books.

“These boys are just amazing,” Pisano said, as tears filled her eyes. “I want to cry. It’s breaking my heart that it comes down to this. I don’t think the people making the decisions understand how it will affect the children.”

About 118 librarians throughout LAUSD have been given lay off notices, she said. However, student body funds and the Taper Avenue PTO have come up with enough money to keep Pisano for three hours a day – although she would no longer have any insurance. Even with that, Pisano, whose family has encountered numerous financial troubles as so many others during the recession, doesn’t know how she will make it.

It ‘s partly why what Jake and Ian are doing for her is that much more profound.

“They are unbelievable, these two,” she said. “They will come in and exchange a book a day.”

If she winds up with three hours, Pisano said, the library will have to close before and after school and classrooms might have to wait weeks use the facility.

In the meantime, teacher Debbie Cornell said she was thrilled that her job wasn’t in jeopardy and remains flattered by the two students concerns and the fundraising they started.

“Jake was so worried and this is all him,” she explained adding that “His mom and dad didn’t come up with the idea. It’s so cute. He even told me I might have a little something in my paycheck.”

Next, the twosome plan to start up a student newspaper, the Daily Tiger. The students will provide the stories, they explained, and the first issue will be out on May 5.

It’s true that the two boys – even with the entire school recycling – aren’t going to raise $40,000 to maintain the librarian’s full time job.

But that’s not what matters, said school officials.

“I have two industrious second graders who came up with this plan to save their librarian,” Principal Steinbach said. “I have to commend them for it.”

Perhaps we should all take their cue.

Posted by theunderdogforkids at 8:13 AM 2 comments: Links to this post