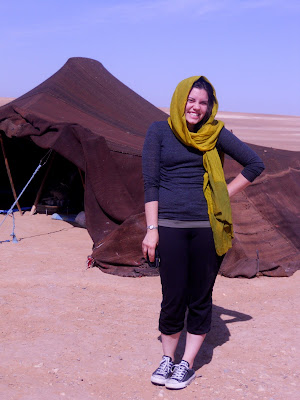 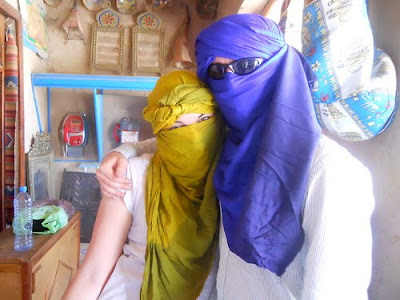 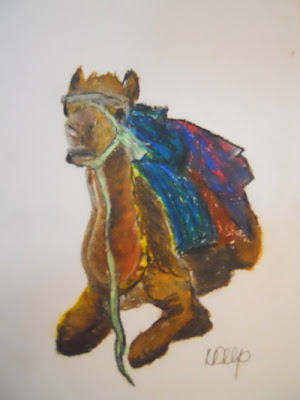 Kristin above veiled with a friend and her drawing of a camel during her visit in Morocco.


THE THINGS KIDS WILL DO TO US! TRY THIS ONE ON FOR SIZE: THE 19-YEAR-OLD DAUGHTER OF FORMER SEVENTH TH STREET ELEMENTARY SCHOOL PRINCIPAL COMES HOME AND SAYS: OH, PARENTS, BY THE WAY: I’M MOVING TO MOROCCO TO STUDY ARABIC FOR A FEW MONTHS

THAT’S WHERE SHE IS NOW-- STILL UNMARRIED--DESPITE A FEW PROPOSALS; YOU CAN VISIT HER FASCINATING BLOG AND READ ABOUT HER ADVENTURES WHICH WILL CONTINUE ON TO CASABLANCA, MARRAKECH AND THEN GREECE: NEXT SUMMER, TURKEY, JORDAN AND WHEREVER ELSE SHE SEE FITS

She’s worked her way around the marriage proposals, ignored the grabs and accepted the “male-dominated” society she currently lives in.

She doesn’t wear veils since she is not Muslim, fearing it would insult residents of her hosting country; And she tries to steer clear of thinking like a Long Beach coastal gal -- and a bit more – while like a Moroccan.

Not always an easy approach for a single, young westernized woman, who has discovered a large part of her plans to study Arabic wound up being more about learning to live within someone else’s’ culture and attempting to think like them.

Getting a grip on the cat calls, the proposals and men following her wasn’t easy, but it came with the territory. As an American, she stood out and she knew it.

“The harassment is hard to explain,” emailed Kristin Colazas Delfs, who announced to her parents a year ago that she was headed for Morocco alone to study Arabic and had found a small school there she could afford to attend in the country’s capital, Rabat. “It seems terrible from a Western perspective that I've dealt with that at the age of 19, but by Middle Eastern standards that treatment is sort of mild. It has never gotten violent, and I really do believe that it has more to do with me not being Moroccan than anything else.

“…Usually a "la shukran" (no thank you) is enough, but if not I just leave the situation. I've only been stuck once or twice; I was in a cab once when the cab driver kept trying to hold my hand, asking me to marry him, and took me the long way home. It's times like those when I'm glad I speak some Arabic, glad I know Rabat, and glad I'm not just a tourist.”

Her fascination with languages started when she was young and also being a product of two parents who left their own country to study Spanish in Mexico and became fluent speakers. But Kristin found her four years in Spanish classes frustrating, especially as they were taught in English, and “I never really felt a connection.”

North Africa and the Middle East fascinated her, however, especially after reading books like A Thousand Splendid Suns, Reading Lolita in Tehran and The Saffron Kitchen. Having earned a year’s worth of college credits through AP classes in high school, Kristin forged ahead at Long Beach State University and saved all year long working weekends at the Long Beach Aquarium and becoming a crew-leader for the U.S. Census to pay for her upcoming trip.

Knowing her parents would be nervous about her traveling anywhere in some of the nations that were facing war or other disruptions, Kristin, said: “I tried to chose one that was somewhat less turbulent and narrowed my search down to Morocco, Jordan and Syria.”

Discovering a small language institute called Qalam wa Lawh in Rabat would cost her less than three months of Arabic schooling in San Bernardino, she settled on Morocco.

Going abroad made her parents nervous, she admitted, but she didn’t want to be deterred from her goal.

Her father, Zan Colazas, the former principal of Seventh Street Elementary School, agreed having his daughter go to North Africa alone made him fret.

“I was a little apprehensive of course with all the things going on in North Africa,” he said. “But I have a lot of trust in her. She’s mature beyond her years and has a good head on her shoulders.

“Sometimes, you have to let them go into adulthood.”

Not that it was easy. Even Kristin, feeling somewhat strained with intensive study of Arabic for eight hours each day for two months. She found herself ready to cut back her schooling by a month and will extend her travels to Casablanca, Marrakech and Greece.

She wouldn’t change what she’s learned in Morocco for all the tea in North Africa, she exclaims.

“Through my reading and research I have discovered that both the East and
the West have their own traditions and an intense sense of pride and
individuality,” she wrote. “It’s their pride and commitment to tradition and values
that keeps them from understanding one another. Each is set in their own ways,
and neither is willing to change those ways for the other.

“Growing up in America, I always only understood things from the Western perspective. I wanted to understand the other side, and I knew that the best way to do that was to learn the language, communicate with the people of the region, and try to interact with them on a level that we could both understand.”

For the most part, she found the people loving and friendly and she made plenty of friends. She followed a dress code wearing no shorts and making sure her shirts were at least elbow length or long sleeved and that her skirts were knee length.

Moroccan women, she said, could get away with wearing less attire, but they didn’t stand out like a young, visiting American woman who had no “fathers or brothers nearby to protect their honor.” Because the city is filled with politicians, ambassadors and business professionals, she said, “not veiling” was much easier than if she was visiting smaller villages.

In the states, she studied Modern Standard Arabic. She explains, however, it is not a spoken language and is typically used in university settings and in writing. Arabic is broken down into different dialects, which also differs from country to country. Egyptian Arabic is the mostly widely used and understood. In the future, she hopes to pursue a Master's degree in Middle Eastern Study and head into international development.

She attempted to learn the Moroccan dialect, which residents found amusing.

“ Moroccans generally laugh when I try to speak their dialect, but they always smile, tell me welcome and shake my hand--- men and women alike,” she said.
“There is nothing else like speaking to them in their own language and being able to communicate clearly with the people of this country. They are some of the nicest people I have met in my life.”

For more about Kristin’s adventures, visit her blog at: http://berriescastdarkhooks.tumblr.com

Posted by theunderdogforkids at 9:36 PM No comments: Links to this post