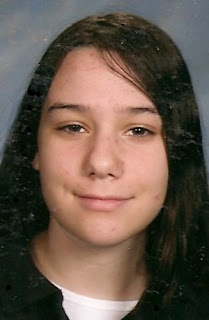 Dear Readers: On occasion, I get the chance to read works of students in San Pedro. When I read Amy Epperhart's "Moth," I enjoyed it so much that I asked her if I could post it on my blog. She said: "Sure." Amy attends the Port of Los Angeles High School and has future plans to become an archaeologist and participate at dig sites either in England's Stonehenge or near the Egyptian pyramids. Here is her poem:
The Moth
I am a moth
Plain and hardly visible
Working hard each day
Flitting around in a frenzied whirl
Trying to learn all I can learn
Trying to accomplish all I possibly can
But I forget, I'm only one small moth
In the grand scheme of life
So I close my eyes
And fold my wings
To climb one leafy branch at a time
Each day, I grow and learn
My wings grow a little larger
A little more colorful
A little more unique
I am a moth
Ever smiling. I spread my vivid wings
And let the fluid currents of life
Take me to my dreams

Posted by theunderdogforkids at 5:00 PM No comments: Links to this post

As a child, I vividly remember watching the "Adam Walsh Story" on television about the 6-year-old disappearing at a Sears Roebuck Store in Hollywood, Florida. Only five to ten minutes after his mother left Adam in the toy department she returned.

Adam was nowhere to be found.

Adams's mother's frantic search for her son that hot July afternoon has grown into a 25-year search for answers: Who took her son? Why did they kill him?

On July 27th 1981, John and Reve Walsh launched what is still considered today the largest manhunt for a missing child in the state of Florida. But two weeks later when Adam's severed head was discovered in an irrigation canal by two fisherman, one hundred miles away in Vero Beach, the harsh reality set in. Adam will never return home.

As a father of two children, losing a child through abduction has to be a parent's worst nightmare. We have seen and read stories about child abductions. Some of the stories resulted in positive outcomes, others, like Adam Walsh, have not.

Most recently in our own San Pedro, we had a close call when two Latino males, ages 20-30, driving in a two door, dark (shiny) blue Dodge pick-up truck, approached a San Pedro High female student and a tried to pull the her into the truck. Thankfully, it was through the help of a Good Samaritan that fended the suspects off the victim. We as a community should be outraged that such an act took place in our own town.

I was asked by Diana to tell parents what they need to do as a precaution for their kids. Upon Diana's request, a website came to mind that has been a resource for parents, teachers and police officers called amberwatchfoundation.org.

AmberWatch Foundation is dedicated to the prevention of child abduction and molestation. This website allows you to download and print a coloring book for your child. Here are
some helpful tips taken from the coloring book that should be reviewed with your child(ren):

1. Know Your Phone Numbers. Knows what emergency numbers to call
if you're alone and you need help.

3. Checking with your Parents. Never go anywhere without checking
with your parents first, and make sure they know when you'll get back.

5. My Buddies. Always use the buddy system. Take a buddy with you
whenever you go out to play or walk to school.

6. Attention-Be Safe Kid. Say "No" and run away if someone
tries to touch you in a way that makes you feel uncomfortable or scared and go tell your parents or a trusted adult.

7. Yell, Fight, Run! If someone tries to hurt you, yell for help,
fight as hard as you can and run away.

8. Know your house. Keep windows and doors locked and secured when
you're home alone. Don't open the door and don't let anyone in without your parent*s permission.

9. Lost? Look for Name Tag. Stay with your parents or a trusted adult when you are at the mall, amusement park or other public areas. If you lose them, go to the nearest security officer or store clerk with a nametag and tell them you're lost.

10. My Path. Never take short cuts. Always walk along well-traveled streets and follow the route that your parents planned our for you to go to school or other activities.
11. Taking a Message. Don't tell anyone on the phone that your
parents are not at home. Just say: "They can't come to the phone right now," and take a message.
12. No Secrets! Always check first with your parents before youaccept anything from anyone, even from someone you know. If someone gives you something, or does somethin, and tells you to keep it a secret, tell your parents.

As a society, we should not have to worry about taking these precautions, but the reality is that we have to! As a police officer, a father and your neighbor, I hope and pray that you will never have to experience this nightmare.
Posted by theunderdogforkids at 10:37 AM No comments: Links to this post