To Launch San Pedro High’s After School Cooking Club, The Principal Shakes and Bakes with Her Students 14 Holiday Pies
Students Find They Like The Principal And Her Family Holiday Tradition
By Diana L. Chapman
San Pedro High students scored this past week when their principal decided to teach them personally about one of her family holiday traditions – how to bake  pumpkin and Southern pecan pies almost entirely from scratch.
As students kneaded, lumped, and rolled pastry to make pie crusts-- many of them having never baked a pie in their lives before -- said they were astounded that their principal, Jeanette Stevens, took the time out to work with them.
“It’s not every day you’re making pies with your principal,” explained Jose Hernandez, 16, about why he came. “I’ve never done a pie. I don’t really know how to cook at all. I use to think it was so complicated. But it seems really simple.
“Mrs. Stevens is a great teacher. She has patience even when we asked the same question again and again.”
Jesse Vasquez, 13, added: “She’s not strict and stuff. She’s teaching kids about life. I love cooking and I want to be a chef when I grow up. I like it because it gives me the freedom to create.”
While wearing a red-checked apron and scurrying around patiently to teach a whirlwind of some 15 chatty and happy students, Stevens said she found it “incredibly refreshing” to be back in a classroom with kids – especially when it involves bowls, spoons, eggs, flour, sugar and pecans. Stevens launched the after school cooking club’s first session Monday, which was funded by the San Pedro Coastal Neighborhood Council.  The council provided  $1,000 to support the culinary opportunity.
That’s particularly important since the once popular culinary class, which had waiting lists in the hundreds, was closed due to budget cuts for the past three years. It has periodically reopened, but not for more than a semester.
But with this opportunity, students had a chance to check out their skills. As they gleefully kibitzed, they whipped up a frothing egg mix, poured in pecans, got flour on their faces, their clothes and on the floor – but were really appreciative and surprised that Stevens took her own time out to work with them.
“I really feel I connected with the principal more than I ever have,” said student leader Elizabeth Do, 17, a senior who is president of the school’s Key Club, co-president of the Community Outreach Club and a member of the school’s Academic Decathlon. “There’s so many of us in the day, so it’s definitely hard to connect.
“I feel like I got to know her. My perspective has changed, because now she’s someone I can relate too. She’s just a wonderful principal to take the time out to do this with us.”
Moments were often holiday jolly – especially once English teacher Anthony Saavedra arrived to make fresh whip cream. Stevens and Saavedra had a pie-off competition amongst the staff last year, but the faculty voted that Stevens sweet treats were the best.
“You can tell how political the staff is,” Saavedra joked. “She won.”
Once the crusts were ready and the students started making the mix, Stevens warned them that there’s a lot of debate on how to put pecans in the pie. She said she folds hers into the mix, but others believe they should be placed down on the crust where they can “float to the top.”
“There are people who argue how to put the pecans in the pie,” Stevens told the kids. “It’s up to you.”
To make a go of the after school cooking club, the campus needed outside funding. 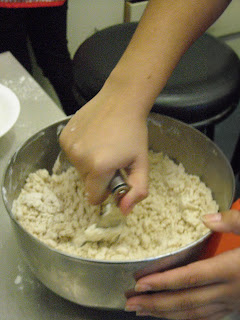 Long supporters of area schools, the Coastal Neighborhood Council offered funds for the club partly because of all the severe budget cuts that have swept away life skills programs, such as home economics and auto shop.
“This is something our board felt is a worthwhile activity, not just for learning self-reliance, it gives students constructive things to do after school,” said the council treasurer John Stinson. “It’s teaching them something that is useful. These are skills you need in everyday life.”
Stevens said what prompted her to do the first lesson was her interest in sharing her family holiday traditions. Much of what she cooks, she learned from her grandmother, who is now 92.  Every year around the holidays, she and her girlfriend come together make 20 to 25 pies, including mincemeat, pecan, pumpkin and sometimes apple.
“My passion is kids,” beamed the principal. “This is so nice to be here and see so many kids interested in a tradition that’s gone by the wayside.”
Student Rita Marquez said the experience showed that something like baking can pull people together and: “It shows us that anyone can do it, from the principal to the students,” she said smiling. “It’s pretty universal.”