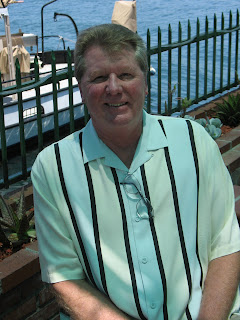 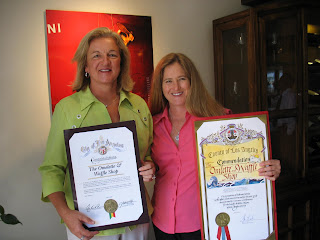 Leslie Jones and Mona Sutton,owners of the Omelette & Waffle Shop, hold their recognitions recently awarded from the San Pedro Chamber of Commerce. Steve Kleinjan, right, who founded Clean San Pedro sits outside during a break.
Good News and Kudos Came in the Month of June to Those Who Help Their Community and Kids

By Diana L. Chapman
One local eatery and the non-profit group, Clean San Pedro, received awards from the San Pedro Chamber of Commerce this past month for their diligence, dedication and devotion to help their communities. They get kudos from me for their efforts to help kids!Owners of the Omelette & Waffle Shop, Leslie Jones and Mona Sutton, won the restaurant of the year award and Clean San Pedro founder, Steve Kleinjan, received the leadership award. Anthony Santich, the chair of the chamber’s board of directors, said he was proud to present the award for the year for the restaurant owner’s endless efforts to clean up the homelessness and graffiti along the Gaffey Corridor. (Mona is the block captain for the Gaffey Street Watch,) The owners have provided a safe haven for students as they leave school and head home and have even broken up fights.“They see the Omelette and Waffle Shop as a vehicle to spread all of the positive that’s going on and they see themselves as a conduit to connect people with information and introductions over a cup of coffee,” the chairman told dozens of folks who attended the event.From my point of view, they fight for the underdog – kids who are often prey to other students. Threatened students can use the restaurant as a place to escape and seek help.Steve, who began Clean San Pedro with a group of hard core volunteers who religiously donate their time to the clean up efforts, started the organization five years ago when he “got tired of the declining conditions and the lack of maintenance of many parts of San Pedro,” the chairman said.Under his organization, Steve has pulled together monthly clean-ups across San Pedro, bought tools, vehicles and other items necessary to make San Pedro an even cleaner and safer town.For children, Steve’s team has cleaned up several schools, but next year he plans to do some schools where he will help students will become the primary clean up leaders on their own campuses – under the auspices of Clean San Pedro.You go Steve!All I can say: thanks to both groups for providing a safer and clear environment for the kids of San Pedro.
Labels: Chamber Awards to those who help the community and kids
Posted by theunderdogforkids at 2:45 PM No comments: Links to this post

LAUSD Must “Still” Focus on the Children

As I leave the LAUSD School Board after serving the last eight years representing Board District 7, I have been asked by the Daily Breeze to submit a column reflecting on my thoughts and hopes for the future. I am proud of the efforts of my staff and office over the past two terms and the simple credo we worked by: “Children First”. But rather than talk about what we accomplished, I submit the following three recommendations for the Board and District for the coming years.

Now however the same focus must be on secondary schools and the needs of those students. The work has already begun with a district-wide implementation process for Small Learning Communities. But while the concept in its essence is good – full implementation of the program will be necessary if we are to truly reach the thousands of disconnected teens who drop out of school every year. This means we have to implement a staffing strategy that will provide each student with a caring adult who will truly mentor and monitor the progress of each secondary student. If you want a “model” to consider – come down and check out the “College Bound” program my Boys & Girls Clubs have been sponsoring for the past five years in support of San Pedro, Banning and Narbonne high school students. It works and so can our secondary Small Learning Communities if the same resources and support of ALL secondary students is initiated.

Collaboration based on the needs of children – not “politics”. The impending plan for the Mayor’s office to take over one cluster of schools (out of nearly 70 district wide), is a waste of effort and resources because it will NEVER be duplicated nor sustained district wide. Pouring millions of dollars of resources and effort into a few schools and then walking away when the money runs out or after the next political agenda gets set is not the answer.

The City can truly assist our public education efforts if it becomes a committed partner to collaboration on neighborhood safety so all children can freely go to and from school and working together with the School district to enhance/expand after school and weekend child development programming. We already have all of the components necessary for the “extended learning day” that the Mayor and others talk about – we just need to bring the resources of the City and School District together to improve and expand those opportunities. True collaboration focusing on children is what we need – not another political press event.

Continue to build new schools especially in the Harbor area. The progress made by the School District over the last eight years in terms of the long overdue construction program is truly a Herculean effort and success story in so many ways. NOW is the time to build the schools planned for communities such as San Pedro, Wilmington and Gardena that correctly were made a “second” priority after I took office and are now scheduled to be built. We allowed the projects in all of the other communities (East & South L.A., the Valley, Watts) to be constructed first due to greatest need – the need and time is NOW to build the planned schools to relieve San Pedro and Narbonne High Schools (both with enrollments of 3600 while built for 2500) and Wilmington and Peary Middle Schools.

Amazingly, some elected officials are advocating for down sizing or eliminating these much needed new schools while at the same time promoting “thousands” of additional housing units throughout the South Bay. Either we spend the $300 million committed to these projects here and NOW or the funding will transfer to the other communities previously mentioned. In addition, schools like San Pedro and Narbonne will go to “year round” schedules unless ALL 2100 planned seats are built! This is a fact.

Let’s build upon the successes of the recent past and concentrate our instructional efforts on our teens/secondary students. Let’s truly form a worthwhile collaboration between the City and School District and build the schools in the Harbor area that are needed and have been promised. It’s not brain surgery – but it will take focus and commitment. Children First.
Posted by theunderdogforkids at 10:18 AM No comments: Links to this post