Residents Write in About the Homeless 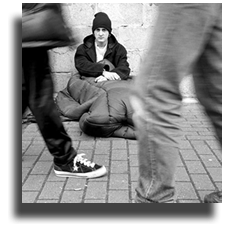 About a week ago, I wrote a story about my confusion on how to deal with homeless asking for money.

The trouble: who is homeless and who is pretending to be?

After witnessing con artists take advantage of my unfortunately generous and believing nature, I penned an article about my experiences, which included a woman asking for food at a Starbucks (which I got her) and then leaving as a passenger in a brand new Cadillac Escalade. Then there was a guy who asked for 50 cents to catch the bus. I eagerly gave it to him.

In turn, the man promptly approached another customer leaving a CVS store.

While these fake homeless march around Los Angeles collecting droves of cash, there are 51,000 true homeless in Los Angeles county living on the streets, according to the 2011 Greater Los Angeles Homeless Count Report.

One answer to avoid the sham came from Mary Gimenez-Caulder, the former director of Harbor Interfaith Services that provides shelter to the destitute. She recommends people direct those begging on the street to area shelters.

Here is what our readers had to say:

·        --I've been meaning to write and tell you that your latest Underdog article was spot-on and has really stayed with me.  It's as if you were privy to the debate that's been going on in my head over this for the last 20+ years.
I think the suggestion to try to re-direct people to an effective Community outreach program is great advice.  Still, a person with a pet (particularly a woman) will get $$ out of me every time.

I've stopped eating lunch in my car when I'm on work assignments, because it's a given that I'll be approached by a man asking for money (often it feels like a near stick-up/shakedown). -- M. Danko

·        The answer I have arrived at is "Only give to those you know."  Really, it's rather like Warren Buffett's "only invest in businesses you understand".  Look around.  Most of us have friends in need, and often too proud to ask.  (If you do not have any friends who are in need, you need to get out more).  Know where your gift is going.  Charity begins in the village.  I give where I know it will be well used.

The reality is that panhandling is incredibly profitable.  Many of those folks are supporting drug habits the cost of which would amaze you.  Spend your charity wisely.  -- John Mattson

·        --Any of us, without a shower for a week and wearing the same clothes, will look homeless and smell that way.  And just by losing your job that person can be you.

The chronically homeless, however, for the most part want to be that way and resist “rescue.”  Especially the veterans, as not a single one of them needs to be homeless unless they wish to be, thanks to the Veteran's Administration.

Before Reagan threw them out for “community care,” many of these folk were in mental institutions, where many of them need to be today, suffering from congenital problems, the shock of war or extended substance abuse.

And for some, it is a business. In Washington, DC, where I came from, the main newspaper did a story on homeless begging on downtown street corners.  No aggressive pitch, just a sign and a cup.  It turned out that they were bringing in between $120K and $160K a year.  Not a bad business.

I am all for helping the legitimate homeless get on their feet and back into society with our aid.  I am not willing to perpetuate homelessness for those who chose not to be “saved,” but for whatever reason want to live on the margins.

I am generally in favor of “direct charity,” cutting out the middle man (or woman) who is making money for themselves out of charity to institutions.  But when it comes to chronic homelessness, real or not, that direct form of charity seems to be counter-productive. -- Kim Stevens

Posted by theunderdogforkids at 12:30 PM No comments: Links to this post