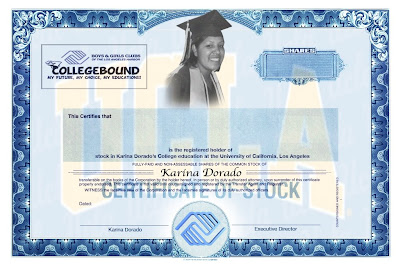 Teenager Reveals Life as
an Undocumented
Student and Her
Struggles to Attend
University;
Despite an Acceptance to UCLA and Four Other Universities,
Karina Dorado Worries About Her Future as the Financial Well
Remains Dry for Students Like Her
--------------------------------------------
Dear Readers: This is a student who you may just want to help. Her story is one of many children whose parents bring them to America, but don’t necessarily understand that education is a number one choice to move forward – and haven’t made their children U.S. citizens yet. According to Karina, she is working toward becoming a legal American citizen, but that won’t happen until the age of 21.

Meanwhile, she wants to become a healthy, educated member of society. Her dedication, grades, test scores, work ethic and university acceptances reveal how worthy of a candidate she is. Money alone stands in the way.
I will post more of her stories in the future. -- Diana

Being undocumented has been great challenge.

I have more challenges and obstacles to surpass in order to pursue my goals. Coming from a foreign country and not knowing the language was extremely difficult. Not only did I have to learn to adapt to a new culture, a new world and a new way of life, I was also expected to read and produce this complex English language.

Throughout my academic years, I was placed in English as a Second Language (ESL) classes. Some people still put me down because of my accent and my continuous struggle to pronounce bigger words. There is a refrain that speaks about illegal immigrates coming to this country to over populate, work at local fast food restaurants or as a gardener maybe even a housemaid for the rest of his or her life. This, however, does not apply to me; I am a determined individual who will strive to reach my goal which is to pursue a career in psychology.

I want to be able to help people with his or her problems and I want to create a safe and amicable environment. School has taught me perseverance, determination and has given me the confidence to succeed in my educational career. I realized that I am capable and can do this on my own. My mother’s increasing absences from parent conference or open house due to work, made me stronger as an individual.

I did not need to rely on anyone to join me on the way to success. I wanted to show my mom there was nothing holding me back. I definitely did not want to use her lack of involvement in my education as an excuse like other individuals would have done. I made it a goal and plan to not only graduate from high school, but to graduate as a “gold division” student with the pursuit of achieving a college degree.

Because of my outstanding performance in my academics studies, I am ranked as one of the top students in my high school class, achieved the gold status and recently was accepted to UCLA.

Although I am not yet at UCLA, I am currently taking community college courses and did so while in high school. I choose to make use of my life as an educated, productive person and of course an undocumented student or should I say “Illegal Alien” as Americans like to call us?

I know that having a chance to go to university will be something I will appreciate for the rest of my life.

Sometimes people are offered opportunities and take them for granted. Some people ignore the advantages given to him or her and do not appreciate them; such as applying for financial aid, free waiver or even attending college. While other students I know can get those advantages – and even though I am following the “American Dream” as most people call it – I cannot because my mother did not help me to get citizenship yet, which for the most part disqualifies me from receiving grants and scholarships.

However, that will not stop me from reaching for this goal. I want to prove that undocumented people can achieve their goals, and that we can acquire success from few resources. I know it will be challenging and I have received help from the Boys and Girls Club – where I attended their College Bound program. Because of the lack of financial help, the club believed in me and did a fundraiser solely to help me pay for UCLA.

My native friends as well as my own mother did not believe I would get accepted because I am not a legal resident nor a U.S. citizen. However, as I reflect on their comments I realize they provided me with the drive to pursue my educational goals. Being accepted to a university is the first step, in achieving my goals, now I must work diligently to make it happen.

I have realized that I am capable of succeeding in pursuing my dream of obtaining a college degree and profession. My diligence and work is paying off. I recently was accepted to UCLA, UCSD, UCSB and the California State universities of Long Beach and Poly Pomona.
I took the time to only apply to three CSU's and three UC's for the reason that I did have to pay for the applications myself, out of my own pocket. I spent around $300 all together. Mom was not even aware of what I was doing with my money. However, she did ask me "where was I misspending ALL of my money?!

I will start at UCLA in the fall quarter of 2008. Everybody has obstacles that we face daily, however, with persistence, we can reach success. Michael Jordan has said, “Success is to be measured not so much by the position that one has reached in life, but by the obstacles which he has overcome while trying to succeed.”

This best describes my desire to constantly overcome any barrier I may face in my path of progress – in this case it’s a financial struggle, but I am dedicated, tenacious, independent and driven to succeed at whatever I do. This is who I am, and I am going to make it!

Donations can be made out to the Boys & Girls Clubs of the Los Angeles Harbor/Karina Fund. Checks can be mailed to: 1200 S. Cabrillo Avenue, San Pedro, California. The club, through fundraisers, has garnered about $11,000 and expects Karina’s schooling to cost about $12,000 per year.
Posted by theunderdogforkids at 11:35 AM No comments: Links to this post