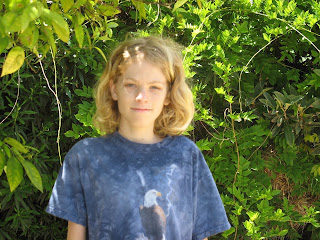 Dinner for Christian's family will be held Saturday from 5 p.m. to 8 at the San Pedro United Methodist Church, 580 6th Street, San Pedro. Adult tickets are $10; children from ages four to six are $6. Children under three are free. Each ticket is accompanied with a raffle ticket. Winners do not need to be present. Tickets will be sold at the door. Additional raffle tickets will be sold as well.


Christian, 14, fighting neuroblastoma
Another San Pedro Child Has Cancer; How Can You Help? Let Me Count the Ways

The skies dazzled a brilliant blue. The clouds lingered in a hazy mist atop the towering, sheer-faced cliffs. And six students were sick with the flu – and staying behind from the grandiose adventures other middle school students were about to undertake -- to scour the glacially carved walls of Yosemite.

One of the stay-behinds was Christian Shelik, 14, a curly, long haired boy who had captured my heart on this February journey. As his science teacher, Alyssa Widmark, pointed out to me repeatedly: “He’s an old soul in a young body,” she said. “I bet you will connect.”

Never could anyone be so right. Having been a writer for as long as I can remember, when I met Christian the first thing I asked him to do for me was write. I didn’t know it at the time, but he had a disability when it came to writing. His page would pour out a purity of words and then suddenly take a nose-dive where it looked like bird scribble – scratching out a different scrawl that made no sense. We didn’t know it at the time, but that disability would be the least of Christian’s problems. His teachers said they were concerned he was losing weight, but to me, he looked fine.

When I got done reading his prose, I knew this kid could write.

The day we left him behind in his cabin when his stomach hurt confirmed that for me. I asked if he could detail on paper whatever came to mind while he sat in his cabin mending. When I came back, he politely handed me several pages of beautiful gems. I could kick myself now, as somewhere along our travel destiny, I lost his pages to the wind and never found them. But I do remember how he wrote these beautiful words as he lingered in his cabin, peering out at the thick forests and the ground floor spotted with emerald moss. Squirrels skittered by and then there were the most seemingly interesting and poignant conversations taking place among the crows. How he wished, he wrote, that he could be privy to those discussions, because he believed the crows might have something profound to teach him.

When I sat down later to read what he wrote, my interest in his potential writing abilities was ignited even more. How beautiful this child could write if we could just take him beyond and away from the disability -- an arena that appeared to be holding him back despite his extreme intelligence and maturity. Meeting Christian and his friend, Felipe, were one of the highlights of my great adventure to Yosemite with Dana Middle School’s Ecology Club – and one I knew I’d never forget. Christian had a profound way of figuring things out; and Felipe – when several us were crawling through a blackened cave and he knew I was panicking –said: “Ms. Chapman. Ms. Chapman. Don’t worry. I’m right here.”

I was flooded with relief.

My husband and I left Yosemite (we were support chaperones) and agreed we had a fantastic journey with some incredible kids (including our own); Some of those kids I would never forget – especially Christian.

A few weeks after arriving home, I was shaking. Christian, I learned through an email from his teacher, has just been diagnosed with neouroblastoma, a rare cancer that often forms as a tumor in the stomach along the spinal cord and typically strikes children at much younger ages. It’s, without a doubt, an extremely grim illness that rarely attacks children over the age of 10 and in two-thirds of the cases starts in the stomach area. It heavily impacts the autonomic nervous system.

Having some familiarity with this disease, I immediately told his teacher my family would help the family in anyway we could. His father, Pete, basically raised his son and daughter, Rhea, 11, in San Pedro and I knew that the family would need as much help as possible – especially because Pete wanted to stay overnight with Christian at Millers Children Hospital in Long Beach as his son underwent went long bouts of chemotherapy.

Money, in all these cases, becomes an issue. And that’s why I believe its important for all of San Pedro to help out in some way or another – even when you don’t know the child. Fundraising for cancer research, joining the Cancer Relay For Life, helping family members, whatever it takes -- whatever you are able to give or do. In this case, two of Christian’s teacher, Alyssa and Michelle DeBilzan and an Ecology Club parent, Sandy Sampson, arranged for a large spaghetti fundraiser for the family. It will be held this Saturday June 23 at the San Pedro United Methodist Church at 580 Sixth Street. (Christian will not be able to attend due to his weakened immune system.).

I will be there. And I hope so will you.

But there are other ways people have stepped up to the plate. Sometimes these are small things, but often they mean more than money. For example, one mother, Megan McElRoy, took Christian’s sister shopping for her fifth grade culmination outfit, which I’m sure helped her Dad out quite a bit and helped take her to school.

Rhea stayed with us for two days when Pete and Christian were in the hospital over night. And because of Christian’s intensive therapy, his immune system is out so out of whack, and he can’t be near any crowds – it looked like he would entirely miss his 8th grade culmination.

Sadly, that was Christian’s biggest wish. He didn’t care if he was in it. He just wanted to watch it. For that reason alone, science teacher Ash Rahmonou has been scrambling to set up a direct video feed so he can watch it from a private room at the school.

When it became clear that both should celebrate their culminations (Rhea’s graduating from fifth grade) I called the owners at the Omelette and Waffle Shop and they’ve allowed us the entire back patio for this family on Monday morning – again because Christian can’t be with crowds.

In all these cases, it makes you just feel better if you can do something --anything -- even if its small – and it helps a precious soul feel that much more loved and wanted. And if we do it right, maybe we will get lucky, and Christian will once again be able to write those beautiful prose.


Posted by theunderdogforkids at 8:05 PM No comments: