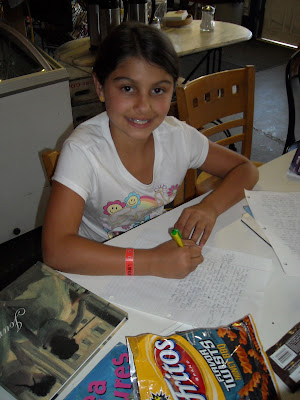 Labels: author of Pie and His Chicks, Keli Mezin
WHEN KIDS CAN WRITE AND A LETTER FROM A GRANDMOTHER TO REMIND READERS THAT NOT ALL IS LOST AT SAN PEDRO HIGH

Dear Readers: A small group of kids meet at the local Corner Store on Wednesday's after school -- to do something extraordinary. They spend an hour writing and creating stories. Here is one of the student's stories. In addition, please don't miss the letter to the Underdogblog below to remind readers that yes, some good things do happen at San Pedro High. Diana

One foggy day a bird named Pie needed to feed his chicks. But it was so darn foggy. It was about to rain and his chicks were incredibly hungry. They hadn’t eaten in three whole days, not even a crumb.

Pie is a single Dad and has been single since the flood that happened in 1958, less than a year back. So, he can’t leave his chicks without protection for long. He would have to be fast.

“Wait a second, Billy. Nicole and Carson, get off the branch and come in the nest immediately!!”

“Ok, Ok," they mumbled as they jumped from

“What Dad?,” Nicole, Carson and Billy twittered in high voices.

“I guess we could all handle it,” they said, but really not too sure how they would do without their father. But, by the time they were all decided they could handle it, Pie was off and away.

Pie was very frightened it would start raining or his chicks might get eaten or even fall out of their nest. Pie shook his head and quietly said to himself, ‘No need to worry. It won’t rain. The chicks will be just fine.’

But soon…………it started raining, then pouring and finally, thundering.

Pie still had no food. He quickly flew under a big mushroom and started thinking: "What are Billy, Nicole and Carson going to think? That I betrayed them?" A little voice from inside his head said: “The chicks are fine."

He believed his head. I mean his head is him. After 5 hours the rain completely stopped. Pie got out from under the mushroom tiredly and saw a rainbow. He thought and thought until…………………………….: Maybe there is a food at the end of the rainbow.

He flew to the end of the rainbow and there was actually food. There was a big pot filled with worms and bugs. He took as much as he could handle and off he flew.

“Hmmmmm, I wonder where Dad is? Billy questioned.

“Oh, he’s probably on his way,” Nicole and Carson teased Billy for being nervous.

Some sort of feather touched Billy’s wing. Billy turned around and there was Dad, with tons of food.

“Well, that’s what I said I would do,” Pie said happily.

But, there are good sides to the story, too. My granddaughter will be graduating San Pedro High this year. She has been accepted to U.C. Berkeley and will be attending there in the fall. Several of her friends, also, San Pedro High students, will be attending UCLA. Let's hear a little about the fine teachers who have led many our your youngsters to fine opportunities, not to mention the students themselves who have studied diligently, given their summers over to taking advanced placement courses, and donated whatever spare time remained to community service projects. My hat's off to them.
Maxine Lebowitz

Posted by theunderdogforkids at 9:14 AM No comments: Links to this post