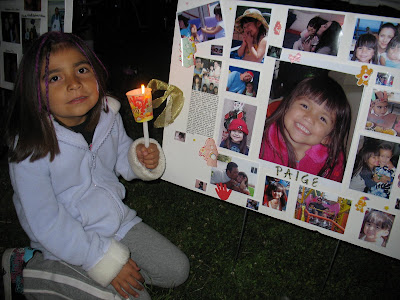 Dear Underdog Readers:
I wanted to share this story written by Tim Marquez, the father of Paige, a 4-year-old who died of a brain tumor two years ago. He sent me this to share the journey of grief that has taken him and his family to the next level – helping other children and other families who've found themselves locked in a similar nightmare. As I’ve written about Paige over the last couple of years, first as a columnist for More San Pedro, then on my blog, I couldn’t help but feel that impish, elfin girl was with me – dancing around in my head with a perky spirit. After listening to her parents describe her as the family peacemaker, the child who begged her parents not to cry while she was dying and who wanted them to help others, I asked Tim if he would share their efforts with the readers. He gave me permission to post this story below and give you the following information about their upcoming fundraiser – and even more importantly – sharing his struggle with the loss of his child. If you can find it in your heart to attend their second fundraiser, Saturday July 28, at the San Pedro Elks Lodge, you too will be helping to prevent the deaths of sparkling children like Paige.-- Diana
(In the photo above, Paige's sister, Blake (left) holds candle at the Cancer Relay honoring Paige)
UPON OUR GRIEVING JOURNEY; WHY WE ARE RELENTLESSLY FUNDRAISING TO RESEARCH PEDIATRIC BRAIN TUMORS SINCE AT LEAST FOUR SAN PEDRO CHILDREN HAVE DIED FROM THEM IN THE PAST TWO YEARS
By Tim Marquez

The following paragraph contains information that I have not shared with anyone outside of my immediate family. I am sharing it with you because I am hoping to give you a feel for what we have gone through and continue to go through. I am hoping that you will take that feeling and express it in your next blog. I want your readers to feel motivated to do something about pediatric brain tumors now because you never know who will be next.

Since Paigey died in July 2005, I have known of three other kids in San Pedro who have died from brain and spinal cord tumors. I imagine there are more that I am not aware of. I cannot sit by the wayside in my sadness and accept that Paigey's death was in vain. One day while I was holding Paigey's hand in the hospital I started to cry. She couldn't talk because of the ventilator tube that went into her lungs, so she shook my hand to get my attention. When I looked up at her she gave me a stern look and shook her head left-to-right, "NO". She did not want me or Cheryl to cry. She was a courageous little girl through it all. She was a bright, funny, independent spirit. I believe she was telling us to be strong and courageous like she was. Despite all the pokes, surgeries, treatments, doctors, nurses, and discomfort that she went through, she did not cry. On July 27, 2005, Paige was baptized and responded to all of the priests requests. About two hours later Paige was no longer willing to cooperate with the doctors and nurses. She began kicking both legs high in the air and hitting her hospital bed. She pulled at all of her IV's, blood-gas tubes, ventilator tube, and brain shunt. Even though her body was weak from lying in the hospital bed for nearly 1-1/2 months, she was strong enough to kick and pull. It was then that Cheryl and I knew Paige had had enough. She was done fighting the killer in her head and spine.

The doctors gave us a choice of continuing treatment or removing her from the ventilator; it was the 42nd consecutive worst day of my life. We decided to stop our baby's suffering and let her go. All the tubes and equipment were removed from her except for the IV that was providing sedatives to her dying body. We laid next to her on her bed over the next 60 hours or so talking to her and telling her how good she is and that we love her. She died in her sleep at 6:45 a.m. on Saturday, July 30, 2005. After she died we bathed her and we were able to hold her in our arms again. I hadn't been able to hold her since June 16, 2005, when she went into the hospital. I was warned in a dream that this day would be coming. At the end of February, 2005 before we knew Paige was sick, I had a dream that woke me up at 4:30 am. In my dream I was holding one of my three kids in my arms at the hospital and they had died. I could not see their face so I did not know which one it was. I rushed downstairs to check on them and all three were sound asleep in their bed. I was happy that it was only a dream. But now, five months later, it was reality. Cheryl and I took turns holding her for about 45 minutes to an hour. The nurse came in and told us it was time for the hospital staff to take her to the hospital morgue. We asked how they would transport her from the Pediatric ICU to the morgue and she said they would put her in a body bag, then a plastic case. We had the nurse wrap her in her blankey so that her body would not be touching the plastic bag or case. We stayed at the hospital until the mortuary had arrived to take her back to San Pedro and we went home with her.
Approximately 3,000 children are diagnosed each year with brain tumors and there is very little funding available for research and most of the children die before they reach adulthood. There also is not very much public awareness of brain tumors. Scientists and doctors do not know what causes brain tumors nor do they know exactly how to treat them. The surgery, radiation and chemotherapy that is applied is used mostly because there is nothing else available. The treatment also has long term effects on the children's body. While its true that radiation and chemotherapy kills cancer cells, it also kills the healthy cells that surround the cancer. Bones and tissue that are within the treatment area stop growing which means while the rest of the child's body is growing, their spine, skull, and other bones are not growing. For these children and families who survive their initial bout with cancer, funding is needed to provide them with long term care and quality of life. The bottom-line is that more funding is needed for research for a cure and to aid families and children who are afflicted with brain and spinal cord tumors.

If I could give my life so that no other children would have to suffer and die like this I would, but I know that is not possible. For this reason I will spend as much of my time as possible raising money to find a cure, which is why we created Paigey's foundation. She would want her foundation to succeed and I know that in order to do so we need everyone's support.

Thanks for listening to my story and request for help. I appreciate what you have done for us.

Here is how you can help besides attending the dinner: Forward the invitation to your friends and family who might be interested; Ask business owners requesting that they donate an item for our silent or live auction. If you know of any business owners who would be interested in donating something for our auction let me know at the above number and I'll contact them.

We are also in need of corporate/business sponsors who would be willing to donate money to offset as much of the cost of the dinner and band as possible. If we sell the maximum capacity of the Lodge the dinner would cost about $11,000.00 ($35.00 per person X 315 people), plus another $1,500.00 to cover the band, d-jay flowers, and supplies. Are you aware of any business owners who are philanthropic and willing to donate to a great cause? In return we would announce their business name during the dinner as being one of our sponsors and they would be listed in our program that will be given out the night of the dinner. If they donate $1,000.00 or more we will give them 2 tickets to the dinner.

Posted by theunderdogforkids at 9:51 AM No comments: Links to this post