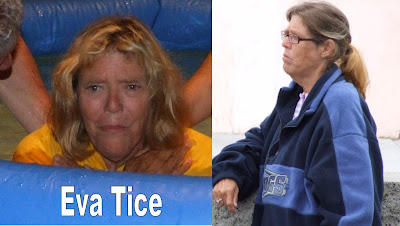 "We haven't solved it. He's still out there and could do it again."--LAPD Detective David Alvarez
Christmas Eve Murder of a 60-year-old Woman with the Mind of a Child Still Haunts San Pedro Churchgoers and the Police

Los Angeles Police Detective David Alvarez calls it the kind of crime that keeps him up at night: A tiny woman with the mind of a child was viciously stabbed multiple times early Christmas Eve as she walked home from an evening church service in San Pedro.

Eva Tice, 60, who walked with a limp after a hip replacement and captured many hearts at her church with her sheer simplicity, was left to die alone on a stone cold sidewalk on Pacific Avenue.  Her broken, bleeding body was discovered between 11th and 12th streets, near the old Ramona's bakery and across from June's Bar, which was crowded that night. All she had with her was her Bible.

Eva died a short time later at the hospital. No one has come forward as a witness.

She was attacked at about 7:15 p.m. as she was walking home, just three blocks from her apartment. Few leads have panned out. With the one-year anniversary approaching, the case remains "disturbing," Alvarez says. Not to mention unsolved. In essence, say those who knew Eva, it was like murdering a child.

"We need closure," says Alvarez, who has been working the case with his partner, Patty Batts. "There are lots of people who loved her. Nobody expects this on Christmas Eve.  People tend to be home with their families, even gang members.

"It's just bizarre and very weird being attacked like that."


The church's congregants remain dismayed, disheartened and haunted that someone would kill a woman who could get excited by childlike things. Her favorite possessions were a duck ornament and a Bible she couldn't read.

She turned down several offers of a ride home after the service, says Becky Aldape, an assistant administrator at the church. Eva was too anxious to race home to draw in some new coloring books and to see her Christmas tree with the  duck ornament, which a sponsor had donated to her and her disabled roommate.

"She was such a sweetheart," says Aldape, who wears a pin that says "Justice for Eva." "She was so harmless. Why would  someone do something like that to her? She was so innocent, so naive. I was angry, real angry."

Aldape turned her anger into making Justice for Eva buttons and worked with other congregants to blanket the neighborhood with posters seeking answers.

But the answers didn't come.


Detectives are frustrated, too, and disturbed over the death of "an innocent." It's a case that continues to mystify them. No one has been caught, despite the hundreds of hours Alvarez and his partner have poured into their investigation.

Investigators have gone door to door, conducted more than 100 interviews, received 30 tips. The city of Los Angeles put up a $50,000 reward. All to no avail. At first, detectives believed it was possibly a robbery, but all Eva owned of any value was costume jewelry.

The intensity of the attack also is puzzling. If it were a robbery, there was no reason for the excessive brutality. She was stabbed "multiple, multiple times," the detective said, in particular in the upper right chest.

Investigators are asking the public to come forward with anything they might have seen or heard--even the barest thread of a rumor. Something small might lead to a break in the case.

But for now, the question remains: Who would want to kill a 4-foot-11 woman with a mind that varied in maturity from the age of 6 to a young teen? Eva already had lived a tough life and didn't deserve this, her friends say. Her parents died in a car crash when she was a child and she was raised by social workers and foster care. She later married a similarly disabled man, who also died.

After that, Eva was given the chance to live in her own apartment with a roommate instead of in a group home or other institutional setting. A social worker looked in on the women at their apartment on 12th Street, police say.

But it was at the church where Eva really seemed to live. People there didn't mind sharing her youthful jubilance despite her age.  In fact, they liked it. Today, these friends remain stunned, angry and haunted.

Eva was known for being helpful, says one of them, Joseph Baroni. She came each Saturday to help him with the church's yard sales -- something she loved to do. He recalls that, on that Christmas Eve, he was pulling out of the parking lot when he waved goodbye to her as she left.

"She was my friend," he said, the pain still in his voice. "She loved God. She loved everybody." She was physically incapable of warding off any attack, Baroni says, and he can't stand to think of Eva's shock that "someone was stabbing her to death."

Because blood would have been splashed on the killer, Baroni believes "someone knows something" and has yet to come forward. Investigators say a man was spotted running away after the attack, but it's unclear whether he was the killer or was running out of fear.

"It is so crazy she got  killed," says a dejected Baroni. "She had no money. If she had any cash, it was a dollar or two. She had no enemies. It's just ridiculous."

Because Eva was so innocent, she didn't understand relationships--sexual or otherwise--or have any idea that anyone would want to hurt her. That kind of trust may have led her to have a pool of street friends.

Hope Chapel allowed Eva's homeless friends to attend the packed memorial service, because she respected them as humans beings--a lesson she taught others who knew her giving, caring soul. Once when a man fell and hit his head at the church's yard sale, people milling about ignored him. Eva came racing back to church officials to ask them to help the bleeding man.

They did and were impressed by how much she cared.

The night Eva was killed, congregant Susie Mendez planned to give Eva a ride but had to leave the service early when she was notified that her grandson had been hit by a car. She was devastated when she heard the news and says she continues to think of Eva every day.

"It just makes me sick, sick, sick," says Mendez, who received a text message about the murder in the middle of the night. "It breaks my heart. That night, she was so full of life and so peppy, like a little kid in a grown woman's body."

Eva couldn't wait to get home that Christmas Eve. She had several gifts under the tree--gifts she would never have the chance to open.

Anyone with information should contact investigators Alvarez or Batts from 7:30 to 5:30 p.m. Monday through Friday at (310) 726-7881. On weekends or holidays, contact the Detective Information Desk at a 24-hour, toll free number: 877-LAPD-24-7. Anonymous web-tips can also be left at www.lapdonline.org (click on anonymous web tips).