MORE CHILDREN’S CHRISTMAS TALES; MAY YOUR HOLIDAY SPIRITS BE BRIGHT WITH DELIGHT
Dear Readers: May your Christmas and New Year be full of joy. Enjoy more tales from young writers – who are learning to flourish with the spirit of  writing during Seven Golden Secrets to Writing Workshops at the Corner Store.
Happy Holidays – Diana 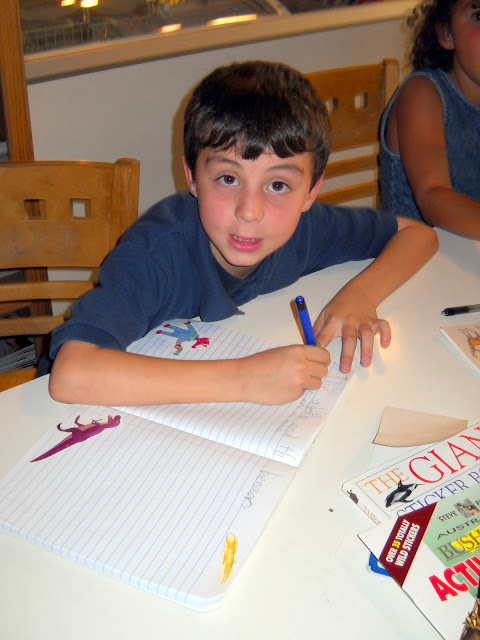 Creative Efrain Marquez,7, has some profound thoughts that he shares in his writing class -especially about Christmas.
Santa
By Efrain Marquez, 7,
Santa is the coolest man in the world, because he gives us toys under the Christmas tree. But he is old. Over 100 years ago, Santa was not there and Christmas was all about God’s birthday. ..I like Christmas. I love the toys. I love Star Wars. I love Legos. I love video games. I love my Mom. I love my dog. I love my brother.
Merry Christmas to God.
---------------------------
The Opposite Elf
By Katelyn Harris, 9
Santa started yelling at me because if anybody, and I mean anybody, asked me a question, I would always give them the opposite answer instead of the right answer. I would do the opposite because, I am the Opposite Elf.
When I stepped in to make the toys safe, I did the opposite. I was supposed to make the toys safe, but I did the opposite because I am the Opposite Elf.
That year, all the kids weren’t so happy about what they got for Christmas. All the toys went bonkers. The toys chased the boys and girls until their batteries ran out, about six hours later. The kids hated their presents.
And their parents were tired because they were trying catch the toys so they wouldn’t attack their kids.
So Santa yelled at me and I cried. That was the year, he granted me a new name: the Right Elf.
From then on, all the toys were done correctly every Christmas. I am now the Right Elf for goodness sake.
Posted by theunderdogforkids at 10:38 PM No comments: Links to this post