Art to Grow On at Dana Middle School Stops 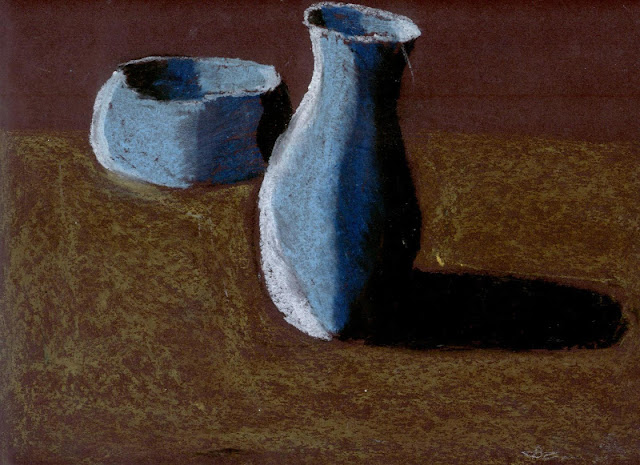 Tears sat in Rachel Fischer's eyes. In fact, she cried all weekend long.

She had come to understand the kids at Dana Middle School, a rugged campus in the core of San Pedro that had struggled for years to turn around its once unimpressive reputation  and become a place where parents truly wanted to send their kids. Fischer was one of those parents.

She eagerly became a volunteer and later the school's chair for Art To Grow On (ATGO), a program where parent docents usher art into the classroom that  initially was only meant for elementary schools but miraculously landed for the first time at a large public middle school. But just last week, Fischer announced with deep regret that the program was halted for the year to the Parent Teacher Organization and her volunteers.

"I regret to inform you that I have sent notices to the social studies teachers who signed up for ATGO last week that the ATGO program has been suspended," Fischer emailed. "With the teacher's interest in having 1,356 students participate in the first project, I cannot make the budget work...In order for ATGO to continue at Dana for the year, there would need to be a funding source of approximately $4,000."

A project typically costs $1 per student.

Thus far, Jesus Nunez, Dana's principal, committed $500. The PTO made no commitment with little to spare from its own coffers.

The loss for Dana students is disheartening especially since the Los Angeles Unified School Board unanimously adopted Board Member Nury Martinez's proposal to bring fine arts back into the district's core programming on Tuesday.

Dana was the first public middle school to adopt the powerfully popular ATGO program that started as a pilot program in 1988 to make up for the artistic cuts in  the Palos Verdes Peninsula Unified School District.

The program pays artists to train hundreds of parents to take art into elementary classrooms project by project. It was so successful that today it touts that it serves 8,000 kindergarten through 8th grade students a year, has 150 volunteers and 17 private and public schools that participate throughout the Harbor area.

While the program arrived at Dana seven years ago as an after school club, it wasn't until parent Megan McElroy came about two years later that the small seed expanded and flourished with a steady group of volunteers.  The group found ways to open it to any classroom during school that wanted to participate -- the way ATGO was designed initially.  As many as 1,600 11-to-14-year-old Dana students painted, sculpted, drew, carved, dipped, salted and molded -- some for the very first time, Fischer said.

"The process of doing ATGO (at Dana) was like doing art on steroids," Fischer explained. "We had to do so much in such a short period. But the (students) would get so excited. The kids are losing all the fun in school. They are not getting any field trips anymore They are not getting any assemblies. This was one of the last things. It was like a field trip on campus."

The loss is awful for students, many of whom need art to experience the joy of creativity in an often tedious day of learning, explained McElroy who left when her children finished at Dana and Fischer took her place.

"Test scores show they need to have art."

It was no easy feat to make the program fit into a much larger middle school where classes were only 45 minutes long, the body count doubled in size and some thought the kids wouldn't be interested. But it all worked so well that teachers repeatedly signed up their students for the projects.

Science and health honors teacher Elise Traylor, who apparently taught ATGO to her own children at 7th Street Elementary, called it "devastating."

"It was just great for the kids and I liked them to learn from different artists," she said.

Fischer, whose 13-year-old daughter attends, Dana, said her heart is broken. She found joy in helping the students and never encountered discipline problems at the campus where the poverty rate is at such a  high level that most of its students qualify for a free lunch. She also enjoyed turning the projects into teaching moments, showing students how making a three dimensional vase was a lesson in calculus and that making totems was a lesson in native culture.


"Doing Art to Grow on at Dana made me feel like I was really making a difference in this community," she said as tears welled in her eyes again. "Having parents there who wanted to be there on the campus was good. Sometimes you have only one chance to make a difference in a kid's life as the next opportunity might not come."
Posted by theunderdogforkids at 10:38 AM No comments: Links to this post