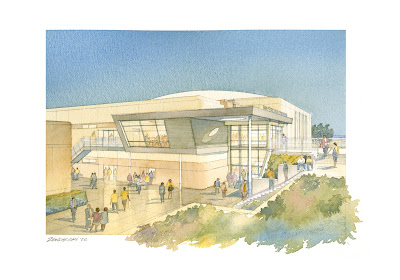 By Diana L.Chapman
Parents, teachers, administrators and particularly San Pedro High School students this week applauded a heavily festooned groundbreaking ceremony for a brand new 1,000 seat, state-of-the-art,22,000 square foot building.
The tab for the new gym is $12.9 million because of increases in construction cost, district officials said.
Hawaiian Dancers, the Pirate Dancers and the school band charmed the audience with peppy performances and traditional band songs while many students beamed proudly that they would at last have a new gym -- to expand upon an existing, much smaller antiquated facility – even if they won’t be around when the project is completed in August 2008.
Most performing arts students said they were squished. Cramped. And competing for space in the old gym, which will remain on site to make way for a new weight room and to expand the school’s dance center.
Charisma Jones, 18, the school’s drill team captain and a Pirate dancer, said she doesn’t even care if she never has a chance to use the new facility.
“I’m just so excited for the future pep squads and know they are going to experience a new gym,” she said beaming. “That’s just going to help everybody. We can hold pep rallies. More people can come. Nobody could really fit into it before. It was just too small.”
Mike Lansing, a Los Angeles Unified School Board member who will step down from his post at the end of June, said the public should begin looking at schools as the new “oasis” in urban areas – as the city of Los Angeles has heavily “ratcheted back” their after school programs and other recreational activities for more than the past decade. Schools across the city, he said, have become the answer to care for children after school -- and for communities recreational options on the weekend.
Having grown up in the area and using the gym as a teenager, Lansing, said he knew from his own experiences how badly a new gym was needed. The gym will be opened for public use on the weekends and for organizations that require permits, he explained.
The board member repeatedly thanked voters for passing bond measures that passed to improve schools.
“The sad truth ,my friends, is that we continue to build more and more housing and watch our population continue to grow, but the city of Los Angeles does not match that growth with the adequate infrastructures we need and deserved including ball fields, gymnasiums and other facilities in which both the school and greater community can exercise.
Under a revolutionary modernization plan – and according to the district one of the “most comprehensive in the country,” the school district began upgrading and modernizing dozens of schools throughout Los Angeles with air conditioning, facility repair and improvements. The funds came from a variety of funds, but mostly from the 1997 passage of Proposition BB and scores of other voters measures that brought the district more than $2 billion to fix dozens of schools.
In the Harbor area recently, Banning High School received a new football stadium with manufactured grass and Narbonne High School received a night lighting system.
XX, in charge of the modernization, said he's proud to be part of such a revitalization program and the said the schools were "indebted" to the voters.
"These things change lives," he said. "These types of things, athletic facilities, are part of building a well rounded person."
Most students that day were delighted by the prospect of a new gymnasium, especially Pirate Dancers who never had mirrors or bars to help them improve their technical dancing skills and overcrowding could dampen even the best school spirits.
Said 15-year-old 10th grader, Lanice Renfroe: "I'm so happy about it. I think it will better our students. ..and help our school spirit."
Tiffany Lytle, 16, and the school's Miss Dance San Pedro, said: "It's going to soar our spirits so high. Our sports are going to excel. Right now, in dance we have to look at ourselves because we don't have mirrors to improve. We have to depend on each other. This is going to be really beneficial."
Only one student said he didn't believe a new gym was the near necessity that a high swim pool was. The high school's swim team, he complained, has to leave campus to compete and has no where to practice.
"I personally would have preferred a swimming pool," said Chase Gallarza, a 15-year-0ld 9th grader. "I didn't 'think we really needed it."
Posted by theunderdogforkids at 4:51 PM No comments: Links to this post