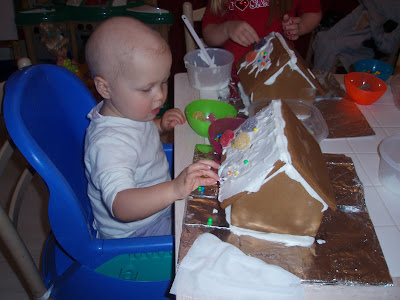 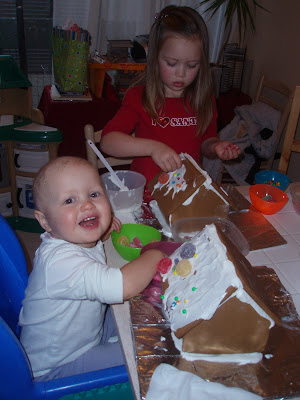 To left, Anna, 4, and sister, Jillian, make gingerbread houses that their babysitter, Kristin Matulich, below brought them.

TAKE A 23-MONTH-Old TODDLER WITH LEUKEMIA, A DRIVEN 17- YEAR-OLD, SAN PEDRO HIGH SCHOOL STUDENT & POPULAR BABYSITTER AND WHAT DO YOU GET?

A DRIVE TO COLLECT BLOOD THAT WILL STAY LOCALLY FOR CHILDREN AT LONG BEACH MILLERS CHILDREN HOSPITAL; NOT ONLY THAT, ABOUT 220 FOLKS SIGNED UP THIS WEEK TO BECOME BONE MARROW DONORS DUE TO JILLIAN'S SHINY, LITTLE FACE

Kristin Matulich babysat Jillian Litton and her sister a few times to know she had fallen for the little sprite. The day she was informed the 23-month-old toddler had a rare form of leukemia in October, she began to relive the horror of her own mother having kidney cancer.

Both her mother – a cancer survivor—and Kristin commiserated how horrific this news was for the young tot, who would now struggle with repeated rounds of chemotherapy and undergo a battery of tests, including spinal taps.

She also knew she adored Jillian’s determined little spirit and was frustrated that she could not become a potential bone marrow donor for her, because the teenager wasn’t old enough. Bone marrow donors have to be at least 18.

Pondering what she could do, a friend and neighbor suggested that she remember Jillian needed blood as well as possibly bone marrow – and maybe Kristin could do something much bigger than giving her own blood -- she could organize a blood drive.

This is exactly what the babysitter did – and not only that – she convinced about 100 some San Pedro high school students to donate their blood as well. This Saturday, the blood drive will be held at Ocean View Baptist Church, 1900 S. Western Avenue, from 10 a.m. to 4 p.m. and is open to the public.

As far as Kristin is concerned, it was the least she could do. She roamed from classroom to classroom at San Pedro High school before the holidays, asking other students who were at least 17-years-old to participate.

And despite being somewhat nervous about it, when she called Millers Children’s Hospital in Long Beach, not only were hospital officials accommodating, they offered to do the blood drive instead of using the Red Cross.

Bingo. That sold Kristin on the spot, because now she knew she wasn’t only helping Jillian, she was helping scores of kids whose lives have become entwined with the nearby pediatric hospital. Local children will receive the blood, she said.

“I’ve talked to a lot of people,” Kristin explained to me while attending a highly successful bone marrow donor drive last Saturday for Jillian and other children who might need it. “A lot of (students) told me they are afraid of needles.

“I’d tell them: “Hey, you wouldn’t hesitate if it was your little sister. Or I’d say: ‘Jillian's going to have 12 spinal taps by the end of this. What’s a little needle?”

Her outreach at the school scored at least 100 sign-ups for the drive, which is opened to the public for anyone in good health, over the age of 17 and who has not received a tattoo within the last year.

Contacting Jillian’s mother, Michelle Litton described the babysitter as one of the most “compassionate, generous, enthusiastic and driven people I’ve ever met.”

Wishing she could give Kristin an award, Michelle explained: “She has done more for others in her 17 years than many people do in a lifetime. From the moment she heard about Jillian she has been giving her time and attention to our family. She assembled gingerbread houses for my girls to decorate when Jill was last at home and they had so much fun with her! … She has offered on numerous occasions to baby sit... If my girls grow up to be half the person Kristin is, I would be over the moon.”

What an incredible kid!

She deserves much credit for forging ahead and getting past her own fears. I was delighted to meet her at the bone marrow drive, which had an amazing turn out. About 220 people got “swabbed,” last Saturday meaning they swabbed the inside of their cheek to see if they might be a match for Jillian or scores of other kids who might need a bone marrow transplant. About 170 people showed up for a similar drive a week earlier in Torrance.

The Littons’ friend, Shana Ghekiere, was one of many who lead the charge to run the bone marrow drive and was also the person who suggested Kristin do a blood drive. She’s one of a long cast of characters who’ve stood up to help the Littons – which is what we all need to do in these times of need. The friends have been relentless at helping out, even holding garage sales to help defray the costs for those who agreed to be swabbed as a potential bone marrow donors.
Typically, individuals are charged $52 to register to become a donor. That didn't sit well with the Litton's friends, who made enough money to pay for every individual that registered.

Jillian’s mom put this story best. All these drives, from the bone marrow to blood drive, help many other kids besides her daughter.

“This is so great for Millers (hospital) and so many kids,” she wrote. “We’re just putting a face on a cause.” And then added, somewhat sheepishly, a “mighty cute face if I do say so myself.”

If you had the chance to meet Jillian, you couldn’t help but agree. That little imp is a go-getter who does’t seem to agree with anyone that she’s sick. And perhaps this little heart will triumph over all the odds she has to face – especially when she has teenage friends like Kristin.

To learn more, visit these links:
http://www.getswabbed.com;/
http://www.marrow.org;/
http://www.jillianupdates.blogspot.com/
Posted by theunderdogforkids at 8:45 PM No comments: Links to this post