SAN PEDRO POP ROCK GROUP TAKES ITS FIRST CRACK AT MUSIC CAREERS BY LAUNCHING A SIX WEEK-LONG TOUR AT BOYS AND GIRLS CLUBS ACROSS CALIFORNIA AND OREGON: THE SAN PEDRO BOYS AND GIRLS CLUB IS WHERE THE SEED BLOSSOMED FOR  THE GROUP CALLED “LAST DAY OFF” WHICH  WANTED TO GIVE BACK TO THE ORGANIZATION THAT HELPED CREATE IT
THE BAND’s FIRST  VIDEO WILL BE RELEASED THIS SUMMER


Musicians from the band Last Day Off will never forget one of their first gigs at the Pacoima Boys and Girls Clubs.
Teenagers and younger kids thrust their hands in Andrew Mocatrao’s towering, frost-blue Mohawk stacked five inches high atop his head. The kids begged for autographs, photographs, T-shirts and wanted their own sneakers and shirts signed.
But what shocked the band  were the many children that thanked them – including teens – for letting them see their first live performance.  It sent chills up their spine that they could give back to the place where it all started.
“A lot of the kids had never even seen a band and it was  totally new to them,” said an amused Wolf Bradley, 17, the leader who plans to take off school for a year to continually go on tour.  “They were touching our guitars. They kept our picks.”
“Once I walked in there, they thought we were all famous,” said 18-year-old Andrew, attributing it partially to his punk style. “They treated us like that. It was awesome.”
Interested locals – especially parents who want their children to see a refreshing band that says no to drugs and that life should be not just fun, but cherished -- can see the band perform at the Taste of San Pedro Aug. 6. 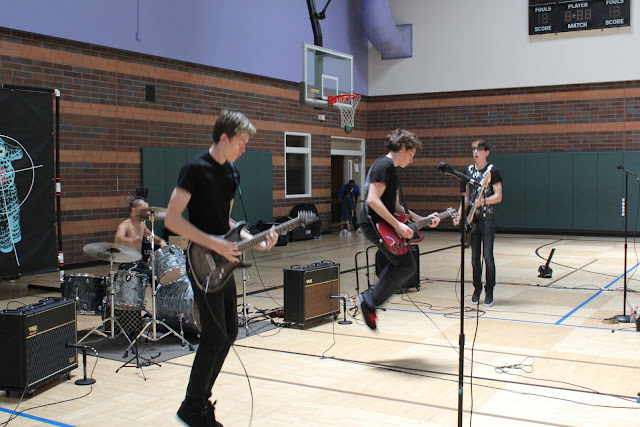 Their songs, like “Party” include kegs of the Mexican fruit drink horchata instead of beer and still include the heart breaker pop love songs, such as Mrs. Right.
What makes the band’s visits this summer to Boys and Girls Club all too ironic, Wolf explains, is that’s where it all began at the small teen center in San Pedro where the club had scored a major grant and was able to purchase musical equipment and a contemporary, digital music studio. 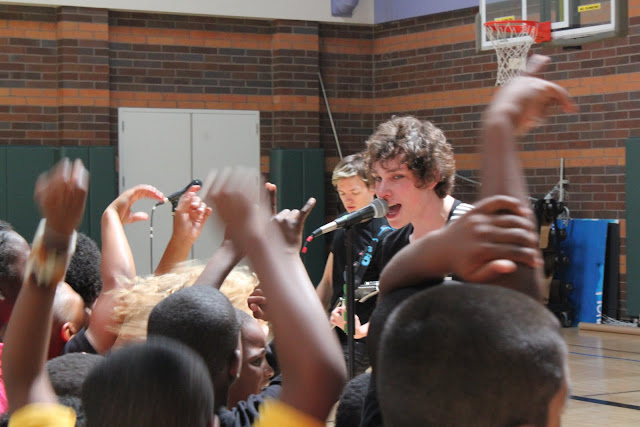 Because his mother, Cindy, and father, Patrick, own the San Pedro Ballet dance studio – and are both performers -- Wolf spent a lot of time at the San Pedro club.
Initially, he had no interest in music and was committed to a career in film making. That all changed when Boys and Girls Club staff introduced him to music.  He started on the drums then plucked at the guitar.
By 7th grade, he recorded his first song at the club’s recording studio.
“It was terrible,” he grinned widely. “It was supposed to be punk, but it didn’t sound punky. My voice was so high and I just couldn’t get up the grunge. It’s really funny to listen to.”
“It was terrible,” Andrew agreed during an interview before they lunched the tour. The two have become tight friends since forming the band three years ago.
Boys and Girls club officials said they are both delighted that they were able to help get Wolf’s career off the ground and that  Last Day Off is returning the favor.
Andrew and  Wolf  later added guitarist Jonathan Barron, 20, who went to Palos Verdes High School and bassist Thaddeus Sundin, 15, who moved from Oregon with his parents permission to live with the Bradleys to pursue his musical career. 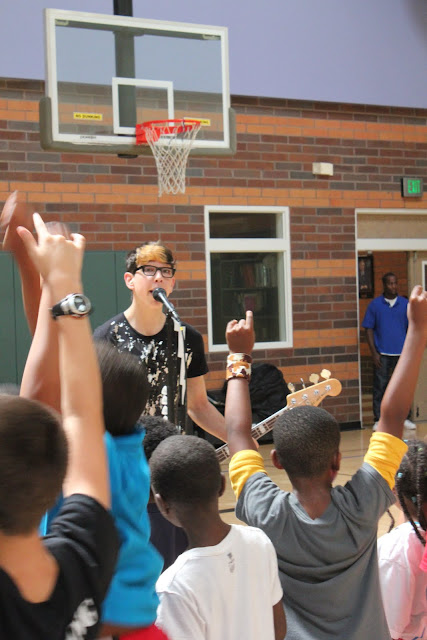 When Jonathan auditioned, both Andrew and Wolf tired quickly of his soft strumming, classical style  and that he wasn’t “shredding”  his guitar, Wolf said. He didn’t have the style they were seeking.

“He was really shy and his haircut was just so random,” Wolf explained. But both musicians could see that Jonathan had possibilities. They offered him to learn several of their songs and to return.


On Jonathan’s side, he was stunned when they asked him if he smoked pot – thinking that they wanted him too – and as Christian, he knew he wouldn’t fit into a drug environment.

“I wasn’t sure if I would do it,” said-20-year-old Jonathan. “I don’t do pot.” But when he understood they didn’t either, he took the songs, learned them, and returned several times to learn how to shred with Wolf.


“I’d come back and Wolf would teach me, “he said. Next he knew, he was in the band.
The last to join – “the final piece of the puzzle” -- was Thaddeus Sundin, 15, who Wolf
met accidentally at a party in Oregon where his aunt lives and runs a dance studio. Wolf’s  family vacations there every summer, performing and dancing, and take Andrew along.

Thaddeus, who was homeschooled and also danced, has just  picked up the guitar a year ago, but had not plans to join a band.

Wolf and Andrew heard him play and thought his music was decent, but didn’t even consider him for Last Day Off since he lived in Oregon. “It was just meant to be fun,” Thaddeus explained. He had no intention of a musical career.
Wolf shakes his bushy hair and laughs: “I don’t understand what happened or how I happened.”
That’s where a mom – especially a performing mom -- can come in handy.
Cindy, Wolf’s mother, had spotted Thaddeus’s talent too and pointed it out to Andrew and Wolf.  Because Thaddeus was also performing in ballet and knew the Bradley’s relatives, Cindy approached the family and asked if the 15-year-old could come and live with them and go on tour. They agreed.
Wolf has also left school for his last year to tour.
“That was a tough decision, taking a year off school,” Cindy explained. “But the bands at a place to move forward 100 percent and I’m certain he’ll go back. It’s just risking that time. But I’m sure it will be applied somehow to his future.”
The Bradley’s – using a van provided by Jonathan’s father – agreed to take them on the summer tour.
Mike Lansing, executive director of the Los Angeles Harbor Area Boys and Girls Clubs, said them returning to help the organization to promote their band and play for their members is a winner for everyone.
“The reason we started and expanded our music program was to provide a growing number of youth with an opportunity to have positive experiences in music and develop their talents.,” Lansing said.  “The same for our recording studio. We continue this commitment in these difficult economic times because except for the Boys & Girls Club, no one else is providing these important artistic opportunities in our community.

“ Congratulations to Wolf and good luck in his continuing development and career.”
Visit Last Day Off sites:

Posted by theunderdogforkids at 8:26 PM No comments: Links to this post