When to Give to the Homeless 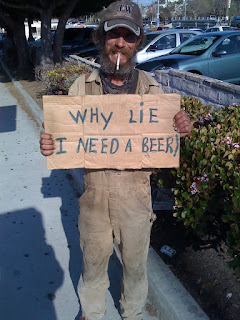 When to Give to the Homeless and When Not To? I Guess I'll Never Learn

I was writing at the Starbucks on Fifth Street in San Pedro when a woman wandered in.

She walked boldly up to me, explaining that she and her son were hungry. Would I be willing to get them something, maybe a bit of food? In my mind I've conjured up the son as a little, 5-year-old boy and am ready to buy them anything they want.

For the most part, I've made it a rule not to give cash, but I will typically buy food and coffee for those living on the street.

The woman was nice and asked each time if she could order a frappe and then another one, and a sandwich, and then another one ("Is that ok?") and when the bill was nearly $11 and paid, I planted myself firmly back down at my table to keep writing figuring I did my good deed for the day.  But then I remembered I'd left something in my car.

It was then that I got a full-in-the-face punch about the realities of life. Things are not always what they seem.  And of course, that is the truth in this story. 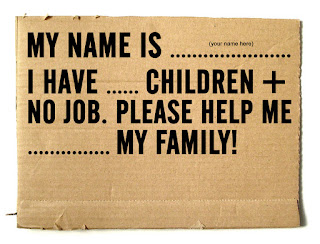 As I went to the lot, I spotted the "homeless" (my word, not hers) woman sitting in the passenger seat of a brand new Cadillac Escalade with another woman driving and the young man, the son, in the back appearing to be about 20. Ouch. Ouch. Ouch. And ouch again. I'm not complaining.

This was completely my fault. The woman never once told me she was homeless. I just assumed it. And come to think of it, she wasn't dressed that badly, either. My guilt and shame to help the homeless comes perhaps from the large number living in Los Angeles County even though the numbers are down. The destitute are often so hard to help.

There are about 51,340 homeless in Los Angeles County and nearly half of them live in the city of  Los Angeles, according to the 2011 Greater Los Angeles Homeless Count Report.

Even sadder: the statistics as to who is homeless. Thirty-three percent suffer from mental illness, 22 percent are physically disabled and 34 percent are substance abusers or have more than one of those troubles combined, the report states.

More disheartening: about 18 percent are veterans who are chronically homeless. Veterans, in my book, should never be homeless. They are the band of people who keep us free.

The astounding homeless report was done from Jan. 25-Jan. 27 2011 where 4,000 dedicated volunteers, under the guidance of the Los Angeles Homeless Services Authority, fanned out and started counting. The project covered more than 4,000 square miles and counted each homeless person one by one.

What I am finding so disturbing are the fake homeless folks.

The trouble I was telling Mary Gimenez-Caulder, the former director of Harbor Interfaith Services that provides shelter to homeless, is there are so many con artists pretending to be destitute -- and the flip side of that are the many people who want to aid even in small ways, buying a cup of coffee, getting them some food.

That is why, Mary says, she passes out Harbor Interfaith information to the homeless where they can receive good care and be aligned with the many available resources in the community. A cup of coffee is fine or a bit of food, but that's not even a band aid, she explains. Providing funds directly to shelters such as Harbor Interfaith ensures the money will be used directly for those in need -- and not by con artists.

"When people ask me for money," she explained, "I'll say that I'm sorry and give them the name of Harbor Interfaith. We have to help them off the street. Otherwise, it's perpetual."

But because her heart and compassion are so wrapped (and have been for years)  in helping the homeless, even she will buy food on the weekends, "when everything is closed."

Like Mary, I always have had a heart for the homeless. This is true because I believe anyone can slip into the swirls of dark and dank poverty no matter who they are. It's that whole "There, but for the grace of God go I," thing. It haunts me and reminds me I am lucky to have a decent home and live with a great family and had parents who worked hard to take care of us. Having met so many people in my life trying to come up out of poverty, I know I am blessed. In fact, I am more than blessed.

But I remain troubled that people are faking poverty to get money from those who are generous.

How, I asked her, do you know between the con and the homeless? She replied "When you get in the field, you get a sixth sense."

The problem is: I don't have a sixth sense.  At least, not yet.

For instance, I rolled out of a CVS drug store perched along Gaffey Street where dozens of cars streamed by  on this unusually warm day. In fact, it seemed oppressive and clammy.

A man wandered up and asked: "Mam, could you please give me 50 cents for bus fare?"

A sucker is born every minute and I am one of them.

"Of course," I said, scrambling to open my wallet to find the coins. After all, this guy just needs a bus ride. That seemed hardly generous.
I dropped the coins in his hand and he blessed me.  But I hardly was in my car when I saw the man go up to another shopper. "Please sir, do you have 50 cents so I can catch the bus?"

On another front, I had to learn how my compassion could hurt others. I was outside a San Pedro restaurant when a homeless guy asked for a cup of coffee. I raced in to purchase it and came out with the drink in hand. When I came back in, the owner asked me not to do it again. The homeless were killing his business, he said, blocking off the entryway to his diner and making his customers uncomfortable.

That thought never occurred to me, I am sad to say. I respected his request, but still kept on giving.

Sad. True and then there's perception.

With the family in the new Escalade, Mary pointed out, I didn't know exactly what happened. One time, her former organization found a Torrance mother with her three children living in a brand new Volvo.

"She was a single mother," and had lost her job in computer technology. The shelter helped them get back on their feet, Mary explained.

OK, so I got that. Still working on the word: discernment.

In the last few months, discernment was easy.

Coming out of a Starbucks in the pouring rain, a man sat at table with heavy coats on as streams of water rolled off him. His plastic bag wasn't making a bit of difference. He was soaked and chilled to the bone. It seemed like author Charles Dickens, the 19th century author famed for his works about the poor, would be calling out our names saying "Do something." The man said he just wanted a cup of coffee.

I handed him money to get some. If anyone had gone that far to fake they were homeless, they deserved it.

I also respected a woman and her daughter who also were impoverished, but not homeless. They wanted to wash my car windows. The windows had  just been cleaned that day, so instead I gave them a couple of bucks. They were proud to be working. They also had two dogs to feed,  the loves of their lives,  a pit bull and a collie. They were spilling over with thank yous and gratitude so much o  made my heart warm. They were so proud of their dogs, and they talked about them profusely. I think one was named "Beauty."

Giving those women a helping hand was worth it.

But in a Von's parking lot recently, a man approached for money because he didn't have enough food.

I said: "Really, because I don't know who is homeless and there are a lot of cons." He told me I had to learn how to cut off the cons.

Right then, a lady drove up waving $2 from her car window. I left that guy in the dust. There was no question that he was working us. That's why he was so savvy at explaining just say "no."

To donate to the homeless, look up an agency near you.  To learn more about Harbor Interfaith go to www.harborinterfaith.org. It is the only South Bay area shelter specifically dealing with homeless families. It's located at 670 W. 9th Street, San Pedro, (310) 831-0603.
Posted by theunderdogforkids at 7:41 PM No comments: Links to this post