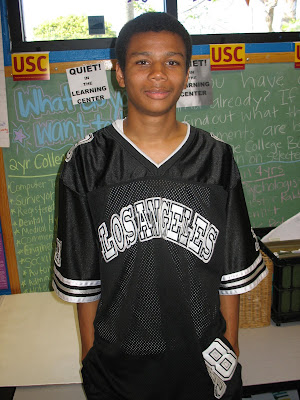 I remember the day I met him. It was a few months ago in one of my writer’s workshops at the Boys and Girls Club.
The teens in the club’s College Bound program were writing essays for their applications, and I asked them to jot down 10 great things about themselves. While other kids’ pens and pencils flew, the one belonging to a 17-year-old named Emmanuel didn’t move an inch. Not even a half-inch. In fact, when I peered over, there was nothing more than a dot.
I looked at him and said: “Why haven’t you written anything?” I kept prodding him about it.
Finally, he looked at me, somewhat sorrowfully, and in front of the entire class of perhaps 16 students announced that in his honest opinion, “I’m a failure. There’s nothing to say. My grades are a 1.8. I move all the time. I’ve never done anything.”
It’s a rare moment when a kid speaks so candidly about himself in front of a class. Of course, I didn’t believe him. I continued trying to pull out some of his potential, knowing that somewhere there had to be some raw, untapped talent--a gold nugget, if you will. All it needed was a bit of coaxing. Sometimes, it comes from an expected place.
Other students began sharing their lists. Whispers passed between Emmanuel and the girl sitting next to him, Annabel. Suddenly, Annabel announced loudly: “Emmanuel, aren’t you a sergeant in the junior ROTC?”
I stopped dead in my tracks.
“What?” I yelped, turning on my heel and looking directly at him. “You’re a sergeant in the junior ROTC and you think that’s nothing!?! Emmanuel, that’s huge! Think about all the things that says about you. It means your committed, determined, disciplined.” Looking rather surprised, it was clear Emmanuel had never thought of it that way.
Since this happened a few months ago, Emmanuel now has an excellent mentor, George Mayer, to work with at the Boys and Girls Club. Annabel helped him realize his great potential. And the changes Emmanuel has undergone are remarkable. I am sad to report that his mother is being transferred again and now he has to move to Florida. While that breaks my heart as I moved many times in my life and know the struggle, I was able to tell Emmanuel that he will survive because now he has a better sense of himself.
Proudly coming to my most recent writer’s workshop, Emmanuel wore his crisp blue junior ROTC uniform, polished black shoes and stood tall. I asked him to write a piece about his mentor in the next 10 minutes. When I read it, I was so moved I made him share it with all the class and told his story that when he joined he wouldn’t write a line.
I’d like to share this with you, readers, because in every child there is a gold nugget just waiting to be mined:

About George Mayer, my mentor
It was about eight weeks ago when I met my mentor. When I first set eyes on him, I’m not going to lie, I didn’t know what to think. However, the second he started talking and telling me about himself, I was profoundly amazed. He started telling me how he survived the most devastating tragedies of humanity. That tragedy was the Holocaust, and based on his experiences from surviving the Holocaust, and being accommodated by some of his closest friends, who were surprisingly German. That kind of altruism and amity inspired him to go out and help other people the same way he was helped in his time of need.
Later on, he asked me what my aspirations were and what my ultimate goal in life was and when I was able to confide in him, I felt like finally there was a person who was willing to listen to me and my story. I told him my dream was to be deeply involved in law, perhaps a district or defense attorney. I told him what I was able to overcome and he even suggested to me some advice on some of my current problems. I am 17-years-old and in the J.R.O.T.C. program with a 4.0 GPA for the fall semester in my junior year and I aspire to be a district attorney.
I chose that profession because I believe that people should hold themselves accountable for their actions no matter what the circumstances are and once they stoop themselves below reproach, they must suffer the consequences. I feel I can be one of those people that forces people to hold themselves accountable for their actions.
Anyway, I also found that Mr. George has an extreme passion for sports, especially college sports. I was shocked as I have the same interests as him in professional basketball and we would talk about who is going to win the championships and who is going to win the MVP. The only thing that I found presented a problem was that I only get to see him once a week and sometimes, I’m not there (Boys and Girls Club) that day. Other than that, I have the utmost gratitude and respect for his influence on me and how I want to live my life.
I hope I can be the kind of person in the future that has had the impact on people’s lives as he has had on mine. When I am able to do that, I will be able to say that: “’Hey, I made a difference.” I did everything I could to better myself and increase the welfare of all humanity. Until then, I will continue to work for my goals.

Bravo, Emmanuel! One thing for sure, now you can write!
Posted by theunderdogforkids at 8:28 PM 1 comment: Links to this post