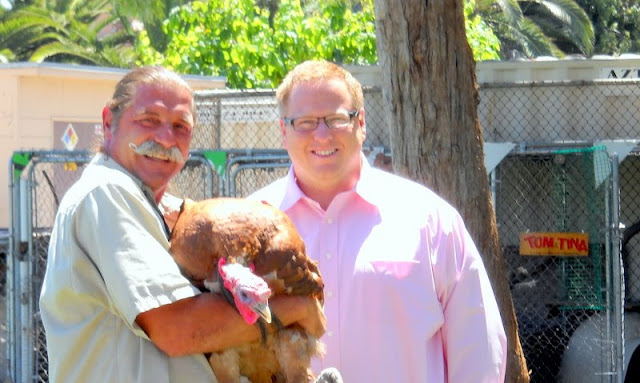 Former  Los Angeles School Board Member Richard Vladovic’s Chief-of-Staff Steps Down from His Post to Tend to Wilmington Elementary School Children;
It’s His First Post as a Principal
By Diana L. Chapman
For more than four years, David Kooper buffeted phone calls, took complaints, managed suggestions, led campaigns and dealt with the media for his former boss, Los Angeles School Board Member Richard Vladovic.
But with a keen interest in kids and education, the former chief-of-staff began his new career Friday – as the principal of Gulf Avenue Elementary School, one of the few remaining schools in LAUSD that still runs on a year-round track.
It’s his first principal post.
Kooper, 33, said he was delighted to take on the role as he’s always dreamed of being a principal. The post with Vladovic, he said, essentially prepared him for the job.  He worked with scores of administrators, teachers and principals during the nearly four years he worked for the school board member and was pivotal in helping Vladovic successfully win March’s election for his second, four year term.


“Every job brings new experiences and new challenges,” said Kooper, a San Pedro resident who taught at three different elementary schools and was a magnet coordinator at South Shores Magnet Elementary School. “I have focused on student achievement district wide and I am eager to focus on one school and provide guidance and support for our hard working employees and eager students.


“I have had many great principal role models over the years. I have watched them lead teams that have produced great results and wonderful atmospheres and I want to do the same for another set of children.”


Kooper replaces Nora Armenta who was promoted to the executive director post for LAUSD's Early Education Division. He began Friday at the more than 1,000 student campus on L Street, but has yet to meet scores of students as they won’t begin school again until Tuesday.
On his blog, Vladovic bid adieu to Kooper and said he was saddened by his departure.
“The end of my fourth year on the Board is also met with sadness, as my Chief-of -Staff David Kooper leaves my office to take over as principal at Gulf Avenue Elementary School in Wilmington,” Vladovic wrote. “He has helped the Board of Education develop innovative district policies and procedures as well as been a great friend of the schools and communities of Board District 7.
“Although I’m excited for David, I am sad to see him go for he was a truly wonderful asset for my Board District.”
Vladovic’s District 7 takes in schools in Harbor City, Harbor Gateway, Wilmington,  San Pedro, Gardena, Carson, Lomita and a large chunk of southern Los Angeles.
Jacob Haik, who assisted Kooper, was named as Vladovic’s new chief-of-staff.
Known for always returning phone calls and attempting to do what’s right, Kooper most recently was able to work with San Pedro resident Robert Brandin to halt a long-termed LAUSD policy to toss out 22,00 federally-funded meals a day – due to fear of litigation.
Kooper asked LAUSD attorneys to review the laws and find ways that the district could spare  further, uneaten meals from being trashed. The good Samaritan Act, Kooper said, had changed enough to allow the district to hand over such meals to non-profits and other organizations  known for caring and feeding the homeless – without facing lawsuits if someone fell ill by eating the food.
The new procedure  was triggered when Brandin asked Vladovic during a community forum why the second largest district in the nation wasted so much food and challenged Vladovic to change it. Kooper, with Vladovic’s blessing, pushed for the change.


Looking forward to meeting students on Tuesday, Kooper said his first day was spent getting the campus “and the paperwork ready for Tuesday’s opening.”
“I have a wonderful staff that has put together a good program for Tuesday,” he said adding that he has no interest currently in running for the school board in the future. “I want to do whatever job I do well and I don’t want to focus on what might be in the future. I am committed to giving Gulf Avenue Elementary School my full heart and all my energy.”


The school’s website says the school is often lovingly called “the old brick building”  because it was Wilmington’s first school house, only had four teachers and opened in 1920.
Today, it boasts more than 60 teachers and administrators and a more than 90 percent rate of Latino students.
While Kooper speaks only a bit of Spanish, he said, he understands it well and likely will learn more while tending to his new school.
Posted by theunderdogforkids at 7:52 PM No comments: Links to this post