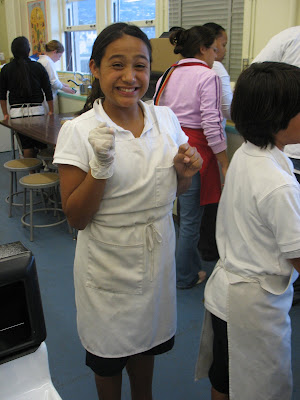 THE UNDERDOG FOR KIDS CAN EVEN COME FROM YOUR LOCAL NEIGHOBRHOOD COUNCIL -- DOING GOOD DEEDS TO HELP LOCAL STUDENTS ALWAYS A HUGE PLUS!

But that’s exactly what it was when our Coastal Neighborhood Council voted unanimously to sponsor Dana Middle School’s After School Clubs– and supplied $2,500 to continue the programs.
But the council didn’t stop there. The board agreed to match another $2,500 if any organization, private citizen or another Neighborhood Council agreed to give that much or more.
Why is this important?
Under the name LA Network for Kids, Dana Middle School has launched many after school clubs to keep students off the streets, direct them away from gangs and give students confidence about their abilities. As a pilot program, Dana could become a role model for other middle schools in Los Angeles. In addition, the entire after school program which includes about ten clubs thus far, was built by parent volunteers, community members and a generous PTO.
As the clubs grew, it became clear the PTO could no longer be the program’s sole financial support. Should the program work – it is currently in the process of being adopted by Beyond the Bell – in charge of LAUSD’s after school programming – the hope is this type of programming could spread among all middle schools – the most ignored tier in the educational system.
The clubs thus far include: Spanish, Croatian, swim, art, cooking, DAPS (like a junior Police Explorers), basketball and are done in collaboration with the Boys and Girls Club. The Boys and Girls Club also runs a homework club every day after school.
In addition, the basketball club – run by CIF Coach Derrick Smith – has an educational component that extends far beyond what people think should be done in a junior high level. Coach Smith has his students go to Hhomework Club several times a week and is in the process of enrolling every one of his players in the College Bound Boys and Girls Club program.
He always tells the kids: “school first, basketball second.” His big vision is to make his players learn fundamentals of basketball backward and forward so they have a shot to make it on a high school team.
But more importantly, he wants to prepare his students for college.
Under this plan, his players will attend the College Bound program every Thursday and get trained on what classes they need in high school, learn how to take the SAT and ways to start exploring financial aid.
The council's funding will help continue the popular cooking club -- which was a collaborative effort between Dana and San Pedro High's middle schools. Sandy Wood, the high school's culinary teacher, trains the middle school students using her high school volunteers to help.
It's a winner for both students, the older youth learn more responsiblities and the younger students are learning a life skill with cooking.
That is why the Coastal Council's generosity – is not a small step for humanity – but perhaps a giant leap in showing how a community working together can build programs that help our kids.
Posted by theunderdogforkids at 10:32 AM No comments: Links to this post