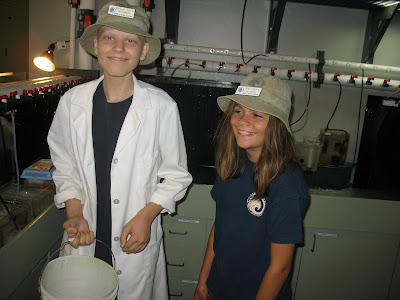 Chrstian Stehlik and his sister, Rhea, volunteer at the Cabrillo Aquarium
Posted by theunderdogforkids at 4:07 PM No comments: Links to this post

Labels: Christian Stehlik and his sister at the aqarium
A Long Battle With Cancer, A Continuous Smile Despite the Odds, An Older Soul in a Young Man’s Body, Christine Stehlik, 16, Gives Way to Fatigue, Drops His 1960s Flair and Dylan Melodies to Become Part of a Larger World: With His Death Last Week, His Father Says He’s “Everywhere Now”

“Just remember that death is not the end.” – Bob Dylan

When the second phone call came from his father, I knew Christian Stehlik had left our small world here on Earth. Pete would always wait patiently until I returned his calls.

This time, he didn’t.

Christian, a sometimes shy, pensive, 16-year-old boy, died May 13 at about 2:30 p.m. after a lengthy, arduous battle with neuroblastoma. That’s the name for a cancer that hits the adrenal glands or tissues in the nervous system, often causing tumors and working its way through the body. Typically, it strikes young children between 2 and 5, but older youth occasionally get it. About 650 children in the U.S. are diagnosed annually.

Christian was 13 when he learned why he was constantly tired and losing weight.

The combination of the disease and treatments rocked him back and forth between poor and better health almost daily. Nonetheless, he overcame a gauntlet that included radiation and chemotherapy and returned to school late in his freshman year.

He joined the marine magnet program at San Pedro High, and continued to volunteer whenever possible at the Cabrillo Marine Aquarium, where he had worked for years to observe the aquarium’s nursery and tend to the aquarium's outdoor garden. When people would ask how he was feeling, he told nearly everyone he was “good”—even when he was not.

He did all that between horrendous bouts of chemotherapy, hospital stays for weeks at a time, blood transfusions and even a trip to San Francisco, where he remained in a room for a week undergoing radiation therapy. While Pete literally roomed with Christian during the long hospital stays, his sister, Rhea, 13, stayed with her mother or family friends.

When he finally returned to school, Christian became electrified by the 1960s. He wore bell-bottom pants, let his hair grow even longer and listened to Bob Dylan’s music. Other students asked him about his dress and he'd quickly gave the peace sign.

"It was a persona he developed and he came home one day and said: "I'm the school hippie." He loved it. It was his new persona and he got a lot of positive attention from it," his father explained.

His teachers often concluded that he was an older man with plenty of wisdom living in a younger body. When I met him two years ago on a student field trip to Yosemite Valley, that soon became clear. One day while hiking in the lush meadows, he grew tired and asked if he could return to his cabin.

He sat in bed staring out the window and writing, describing how robust the squirrels were, how the branches danced in wind and wondered what the constant chatter between the crows and jays was about, wishing he knew their language.

As I commiserated with his father on the phone, I said: “I’m so sorry, Pete. I thought Christian had so much to offer the world.”

“But he gave it to the world,” Pete reminded me when I should have been reminding him. He believed he would become part of everything when he died, Pete explained, and that he was a gentle teacher and reminder that people should take care of Earth and volunteer whenever possible.

When they first learned of his cancer, teachers, students and parents at Dana Middle School, where he attended, had several small fundraisers to help the family pay the bills.

A memorial will be held at the Cabrillo aquarium, where Christian would want his friends to join him to celebrate his life.

He is survived by his father, Pete, his sister, Rhea, his mother, Wendy, and his stepbrother, Alex.

Posted by theunderdogforkids at 7:14 AM 4 comments: Links to this post