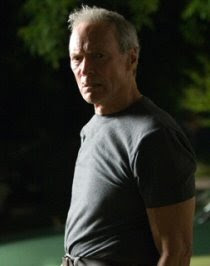 DON’T MISS GRAN TORINO; NOT ONLY IS IT CLINT’S BEST IN MY BOOK, THE LESSONS ARE INVALUABLE AND YES, EVEN AN OLD DOG CAN LEARN NEW TRICKS; THAT INCLUDES YOU AND ME

As a mother, I never thought I’d push my 14-year-old son to see not only a Clint Eastwood flick, but an “R” rated one at that.

I’d been hankering to see “Gran Torino,” the latest film featuring Eastwood as director and actor, since my girlfriend, Kim, told me she thought I’d enjoy it. But my husband declined my offer for three weekends in a row. He’d seen a preview and wondered if it was just another tired old story about violent gangs.

But like Clint, this flick is anything but tired and old. Although he’s 78, he has been churning out his boldest, brightest and most thought-provoking works in his golden years (“Unforgiven,” “Million Dollar Baby” and “Mystic River.”)

Who knew that the gorgeous, deadly cowboy/detective with pistol in hand, delivering memorable lines like “Go ahead, make my day,” could turn out socially conscious movies that question our own behavior – and do so with humor?

In “Torino,” Clint plays an angry and bitter Walt Kowalski, a Korean War veteran who hates about everything in life except for his wife and his dog. His wife has just died as the film opens. He’s left with two sons with whom he has little in common and some self-centered grandchildren who only want to know what Grandpa will do with his sleek Gran Torino when he dies.

In other words, they really don’t care about him. It appears he hasn’t done much to make them want to.

As a sour, wallow-in-my-racist-attitudes, foul-mouthed kind of guy, Walt continues to live in his deteriorating Detroit neighborhood that is occupied by more and more Asians. He lives with many ghosts from the war and doesn’t have a kind word for anybody.

When an extended Asian family moves in next-door, Walt is left spitting – literally.

But don’t worry. The grandma next-door can spit even further than Walt can. And there’s a lot more surprises to come.

The learning comes after Walt daringly saves the next-door family’s teen-age boy from violent gang members but has no interest in their gifts and gratitude. But they keep coming anyway, slowly stripping away some of his hate, and making him look around him for the first time in decades.

I don’t want to give away too much, so I’ll leave it at that. Let me put it this way: The film challenges our point of view by making us uncomfortable about spending time in another—vastly different culture -- and clarifies a point to society that oddly Clint but most others don’t get -- it’s not easy for teenagers surrounded by gangs to stay out of that dangerous mix. They get sucked in by the violence they are threatened with.

And don’t miss the young freckle-faced priest on a relentless mission to get Walt to go to confession. Acting on a request from Walt’s dying wife, he becomes a thorn in his side, even showing up at the bar where the veteran hangs out with his buddies.

Humor. Heartache. Discomfort. Learning about life, as the priest would say, grabbed my husband’s attention when he finally went to see it. He enjoyed it as much as I did and now we are just waiting for our son to see it – even if it is R-rated (for language and some violence).

Some movies are just too important to miss.
Posted by theunderdogforkids at 7:16 PM No comments: Links to this post

Labels: GRAN TORINO A MUST FOR 11 and UP
Newer Posts Older Posts Home
Subscribe to: Posts (Atom)