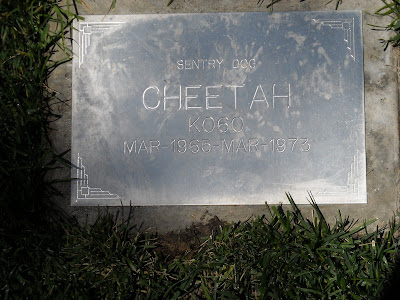 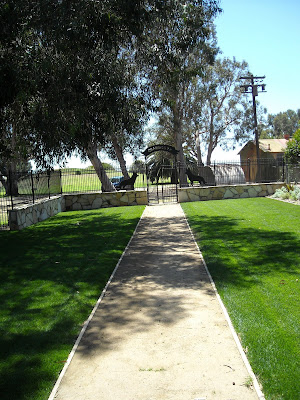 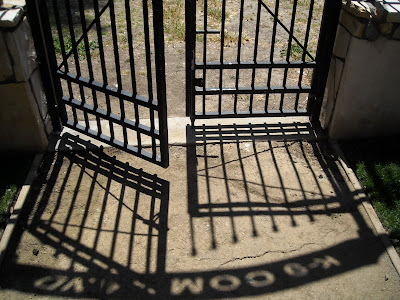 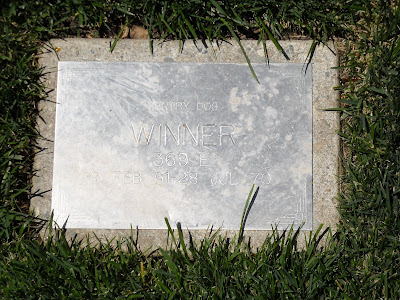 Posted by theunderdogforkids at 11:36 AM No comments: Links to this post

Labels: dog cemetery photos
At Last, the Dogs Are at Rest: Sentry Canines That Spent Their Years Protecting Us and Dying Because They Weren’t Able to Become Good Family Pets, Receive the Honor They Deserve;

The Newly Revamped Cemetery Will Be Unveiled May 23; I Call Them Dorothy's Dogs

There are times in my life that I wish there were more people around like Dorothy Matich and Florence Kleinjan.

These are the type of gals, who go after something, work harder than horses, and then they get it. Because of those two local heroes, when Dorothy decided that something must be done about the shameful vandalism of the historic canine cemetery, the two women mounted a small campaign, and raised more than $30,000 dollars.

The sweet and nostalgic graveyard – now with an iron-arch overlooking it called K-9 Commandos and two iron-forged German shepherds standing guard, sprung back to life after years of destruction and neglect at Fort MacArthur Historic Reservation.

The dogs, Dorothy explains, were trained to protect us at the former military site during The Cold War – and later most had to be killed for that training. The military contended they couldn’t become family pets.

They will be at peace at last in a respectful shady area at Angel’s , where they’ve always been. But now an iron fence protects them. The military fort opened in 1914, was closed down in 1982 and became a historic museum in 1986.

Because of the two women, the newly refreshed, repaired and now gated dog cemetery (which includes one cat) and a three foot border of Palos Verdes stone will be unveiled to the public at , Saturday, May 23 – and is only one out of two military dog cemeteries in .

I can’t help myself. I applaud their efforts. If there were more folks like this in the world, we’d have a lot less desecration and a lot more beauty and serenity in our lives.

“I just love to come look at it,” marveled Dorothy as she walked around the cemetery, graced with a beautiful Eucalyptus on its border. “It’s been such an asset to our museum and when people walk around they are so impressed with it.”

When I got my sneak preview, the only thing I could say was how much I felt at peace in this tiny, sacred spot. When creatures and humans die to save us – they deserve at least this.

But years of vandalism, stealing, and disrepair, left dogs like Cheetah and the rest out in a grassy space in cold, disrespect. Other dogs from the next generations left their dumps on the graveyard.

Many of the dogs’ plaques were stolen or destroyed. To make matters worse, the fence around the cemetery had collapsed.

As most us of us living here already know, a lot of muscle has to be flexed to get any projects through massive bureaucracy of – where nothing slides on the rivers of easiness.

But between the two women and the museum director, Steven Nelson, it was done after three years of hard work.

Visitor and museum volunteer, David Reid, comes down from to work at the museum. He too praised the cemetery which he saw for the first time last week.

“Look at this sitting here,” David said with wonder. “There isn’t an equivalent around that you know of. These are forgotten dogs and the dogs suffered a lot – for us.”

Posted by theunderdogforkids at 10:08 AM No comments: Links to this post